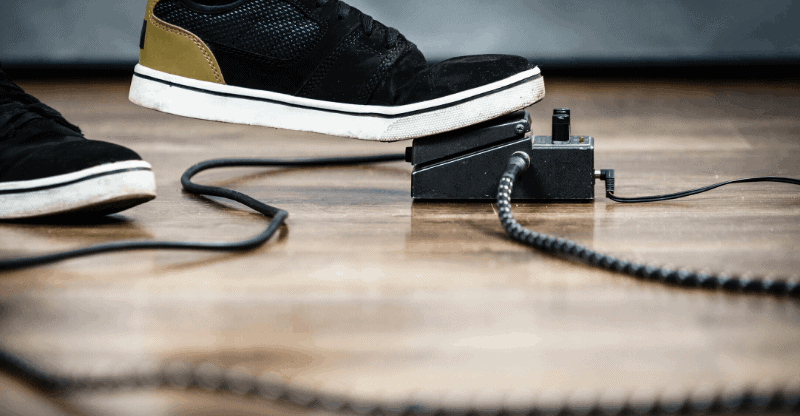 If you play electric guitar, effects pedals are crucial to learn about.

Along with a working knowledge of how amps work (the more types of guitar amps you know about the better), a good understanding of what pedals do and how to fit them together will make you a much better guitarist.

Yes, there are some good multi-effect pedals out there that give you a variety of sounds, but they’ll never match single-use pedals.

In this article, we’re going to give you a tour of the main ones and explain what each one does.

Sound good? Cool, let’s crack on shall we.

The compressor pedal ‘normalizes’ the dynamic range of the signal. In other words, it allows a string that is plucked lightly or heavy to sound the same, therefore smoothing out your overall tone.

It’s an effect that is used nearly universally in recording; the main advantage lies in the fact that every single note played by the guitarist will be played at almost the same amplitude, and thus roughly equal in volume. This allows tones that might otherwise have been lost in the mix (due to complex overtones) to be made audible — resulting in a more precise and articulate sound.

Compressor pedals should go at the end of your pedal chain, after all of the other effects. This will reduce the differences in volume between any other pedals that you use, and make your playing clearer and more smooth.

Any time you hear guitarists discussing pedals, this one comes up. Most notably played by Jimi Hendrix, and more recently on The Stone Rose’s Manchester anthem ‘Fools Gold,’ it’s sound has infiltrated rock guitar of the last fifty years. So much so, that not having one is a bit like not having a smartphone today. You don’t need one as such, but it’d be sort of weird not to.

Think of the open position as the “W” sound, and the closed position as the “H” sound. When depressed and released slowly, the Wah sweeps through a filter as you rock back and forth between open and closed, creating a slow, sweeping effect. And when the wah is rocked back and forth rapidly, the signature “wah-wah” sound is produced.

The octave pedal mixes the input signal with an artificially synthesized one that is exactly an octave lower or higher than the original tone (known as an ‘octave-down’ or ‘octave-up.’) The effect is made possible due to the simple 2-1 relationship between the frequencies of musical notes, which are separated by an octave.

One of the first musicians to apply the octave effect was the great Jimi Hendrix, who bounced back and forth between octave and fuzz to create an effect known as “Octavia.”

Featuring heavily in the 1970s by Jerry Garcia (among others) to get that ‘guitar mutron’ vibe, and equally great for getting a solid funk tone too, envelope filters are a little bit like the wah above in that they directly change the sound of your instrument by altering the frequency of the signal.

Flangers divide opinion (some love them, others loathe them). They create an effect that mixes two identical signals. The result is a swept “comb filter” noise. Flanger pedals allow you to produce a variety of these time delays, which causes them to sweep up and down the frequency spectrum. As for which is the best flanger pedal, opinions vary, but Source Audio’s SA240 Mercury is right up there.

Also known as phase shifters, the phaser is a modulation effect used to impose a resonant, ethereal swirl to your sonic palette. Players in many different genres use these wonderfully versatile pedals and add an ‘iridescent’ quality to your tone.

The univibe pedal is a unique sounding effect; a combination of phaser, chorus, vibrato, and flanger all rolled into one that produces a sound that isn’t readily identifiable as being any of these. Like many effects pedals, it was invented in the 60s as an attempt to replicate rotating Leslie speaker cabs. The univibe was one of the key elements of Hendrix’s sound.

One of the most commonly used effects for hard rock and metal, distortion pedals add sustain and a very noticeable ‘crunch’ to your tone. It’s a sound that’s fundamental for metal and hard rock (it’s no exaggeration to say there wouldn’t be metal music if it wasn’t for distortion). Distortion sounds great when played with power chords too.

Similar to the distortion effect—although much more subtle and less aggressive— overdrive ‘beefs-up’ your sound and adds a heaviness which is perfect for classic rock and roll, blues and other genres that rely on the deep, heavy tones. If you’re into Stevie Ray Vaughan.

One of the original transistor effects and surfacing in the early 1960s, fuzz provides a sound much like its name suggests.

These boxes create a rounded, warm and sparkly distortion sound, providing a meatier and more sustained tone. Dynamic fuzz boxes are ideal for preserving the critical elements of touch and tone—an enriched sound that allows the tone to be heard loud and clear.

Check out our review of best fuzz pedals if you want to know more.

Chorus is a time-based modulation effect that gives you a thicker, richer, almost ‘dreamy’ quality – like having two or more instruments play at once. It mirrors the minute changes in pitch and timing that tend to occur when multiple performers sing or play the same part.

It’s used in countless songs, too many to mention here. Its also works superbly well in conjunction with distortion effects. Check out 90s grunge connoisseurs My Bloody Valentine and Sonic Youth to hear how they used the effect, along with a short scale guitar.

Some of the best chorus pedals include Walrus Audio’s Julia and the MXR M134 (used by Slash on the Guns ‘n Roses hit Paradise City).

Delay naturally occurs when a sound is produced in an ample space – for example, when a sound wave hits a reflective surface, such as a solid wall, it’s reflected towards us.

Analog delay pedals were used through the 60s and 70s, until the digital delay was released in the early 1980s and quickly became a must-have addition to the pedalboard of many of the world’s greatest rock gods, such as Dave Gilmour and The Edge.

With its enormous power to create long super delays (up to 16 seconds, sometimes longer), the digital delay became (and still is) one of the most widely used effects in the industry. You don’t have a spend a fortune on them either – these days there are some cheap delay pedals that sound pretty awesome.

When you play an acoustic, you get natural reverb (echo) from the room you play in. With electric guitars, there is no natural reverb, so you have to rely on an amp (or the best reverb pedal you can get your hand on to add it). Reverb is mostly used to add a bit of depth – a guitar with none applied can be surprisingly unpleasant. Dialing up the effect is used to create a sense of time, space and mood. Just listen to any of David Gilmour’s work and you’ll hear it’s power.

Looper pedals are straightforward in concept: you record what you’re playing, which is played back on a loop – providing a perfect backing track to record another line over. Some of the better products let you record several lines of music, and some allow you to import tracks.

noise gate is useful for live music and recordings. This effect is used to electronically lower the volume of the guitar when it is not being played, so the noise produced by other effects will not be audible (in effect, it’s a sort of noise-canceling device).

The main benefit of the noise gate pedal is that it automatically detects the signal level so it can slowly lower the volume while the playing of the guitar fades away. This prevents notes that are fading away naturally—usually towards the end of the song—from being cut off abruptly.

These provide a graphic or visual representation of the overall frequency response. Parametric equalizers, on the other hand, provide bass and treble controls that work as normal tone controls to allow broad shaping.

The tuner detects and displays the pitch of a guitar’s musical notes. The “pitch” is the high point and low point of a musical note, typically measured in Hertz. Unless you have pitch-perfect hearing, tuners are significantly more accurate than attempting to tune by ear alone.

Another benefit is they let you tune-up on stage when it’s too noisy to hear, thanks to illuminated LED displays. While it’s fairly common these days to use a guitar tuner app on your phone for playing at home, these pedals really come into their own during a performance when it’s not so easy to whip out your phone.

The Tremolo (or vibrato) effect was one of the first to hit our soundwaves and is synonymous with Dick Dales surf sound. It has a circuit that fundamentally changes the volume of the signal at a specific frequency.

Boost pedals add gain to your signal before it hits the input stage on your amp – improving your high gain tone. One of the most basic and widely used stompboxes, it augments the sound without adding distortion or making any equalizer adjustments. Boost will also preserve the timbre of the guitar in its original form.

There are plenty to choose from, but one of the best boost pedals on the market is the TC Electronic Spark.

Volume pedals are used to adjust the volume up or down and are typically placed at the end of a “signal chain. When you position it at the end of the chain, you’re alternating the processed signal as a whole. The main reason to use one, therefore, is to alternate the whole chain and create swells, etc.

If you want the crunch of a classic Marshall amp, without having to shell out for an actual amp, a plexi pedal may be the ticket. Named after the plexiglass fronts on Marshall 100 watt heads, they give you that vintage tone at a fraction of the price.

If you’ve ever tried amplifying an acoustic guitar via a pickup, you’ll know how prone to feedback they are. An acoustic preamp pedal gives you back control of your EQ – and stops you relying on lackluster EQ settings that come with factory installed pickups – as well as cutting out unwanted feedback and distortion.

Not a pedal to be used with acoustic guitars as such, but acoustic simulator pedals reproduce the sound of acoustic guitars. While it will never match the sound of a real acoustic, some come pretty close. Using one is an alternative to carrying two separate guitars, which is handy if you’re traveling and lugging gear about isn’t an option.

If you’re wondering how to hook them all up, here’s how: