Guitar Scales – A Guide for Beginners 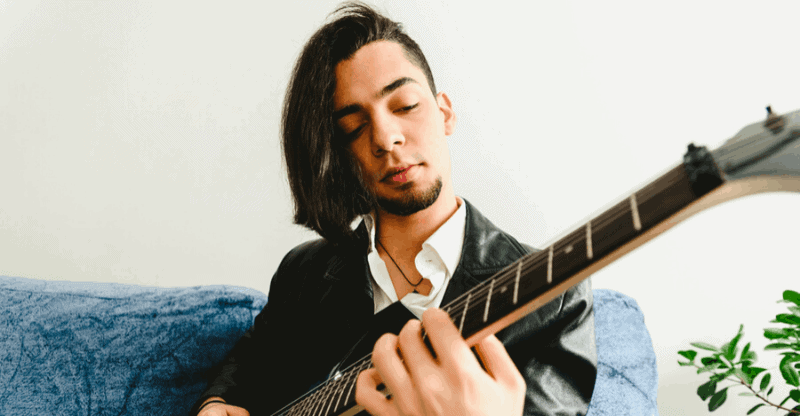 Guitar scales are essentially ‘organized sequences of notes’ but they are so much more than a few notes strung together. For the aspiring guitarist, they’re vitally important to master. As a fundamental piece of music theory, practicing them helps you play faster, strengthens your fingers, improves coordination and even helps as a mental exercise.

But knowing how to tackle them is a frustration for novices, so in this beginners guide we show you which scales to learn first, and in what order.

Sound like a plan? Cool. Here’s what we’ll cover:

If you needed any convincing why you should learn them, here are some compelling reasons:

So yes, they’re pretty darn important. Let’s get to it then…

The 6 Most Commonly Used Guitar Scales

Before we start, notice that each scale has a number of red dots, which denote a ‘root note’.

The first one to learn is the minor pentatonic. This five-note pentatonic scale (‘pentatonic’ literally means five notes) is the most commonly used in modern music, and the minor version of it is especially popular (we don’t cover the major pentatonic here as it’s not used quite as much). It’s relatively easy to play and remember as the shape is quite symmetrical.

Use it for soloing in most genres (rock, funk, blues, pop, etc.) over minor chord progressions.

The two main positions are:

As the name suggests, it sounds great over blues but you will also see it cropping up jazz a lot too.

Next, we have the natural minor pattern, another superb one to incorporate into your playing. The chords formed from this are found in popular chord progressions too.

Use it for forming solos over in rock and pop music.

Now its time to look at the major scale. It’s an important one to learn because you can derive the seven modes from it, which unlocks a world of extra sounds. The Dorian and Mixolydian modes below are two of the most popular.

Use it over major chords progressions, and over major 7th and 6th chords in jazz.

The Dorian mode is the second mode of the major scale, so if you haven’t learned that already, do that first.

The Dorian Mode is popular in jazz and blues including Miles Davis’ classic ‘So What’, as well as on Prince’s solo for ‘Let’s Go Crazy‘. Use the Dorian mode to play over minor chords (e.g. minor 7th chords) in jazz and fusion based music. As modes go, it’s decidedly bluesy sounding, so try it over a blues too.

The Mixolydian mode is the 5th mode of the major scale.

It has been used by the likes of George Harrison and Jimi Hendrix in their psychedelic creations, as it has a slightly Indian sound to it and works really well to get psychedelic riffs and licks. The solo for ‘Purple Haze’ features a bit of this mode, and it’s a popular choice of mode to use over dominant 7th chords. If you’re playing lead guitar to accompany a rhythm guitarist’s funky, fast strums, this unique-sounding mode is worth having up your sleeve.

There are plenty more to learn, but these six will do great to start.

Play each of these patterns in all keys up and down the neck – and remember, when you practice some may not sound particularly melodic. That’s fine. Your goal is to play each in any key anywhere on the fretboard, not sound like a rock god (that will come later, hopefully 🙂