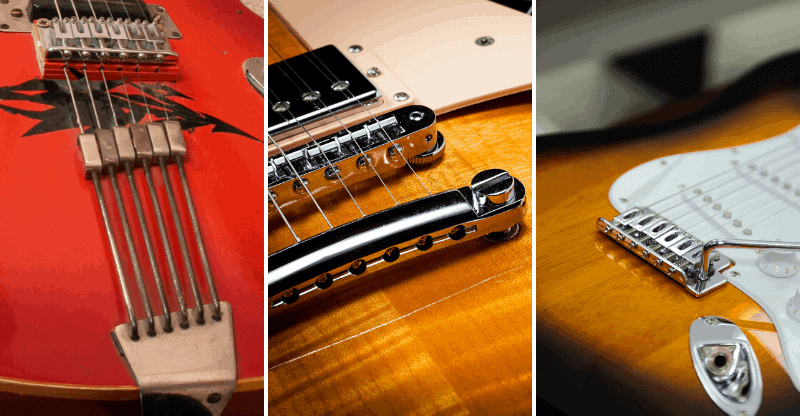 The guitar’s tailpiece is the end, or beginning of the road for the strings, depending on how you look at it.

Its main function is to hold the guitar strings in place securely, with enough strength to combat the opposing tension produced by them once they’re tuned up.

There are four main types of tailpieces used by guitar luthiers, so let’s take a look at them below. 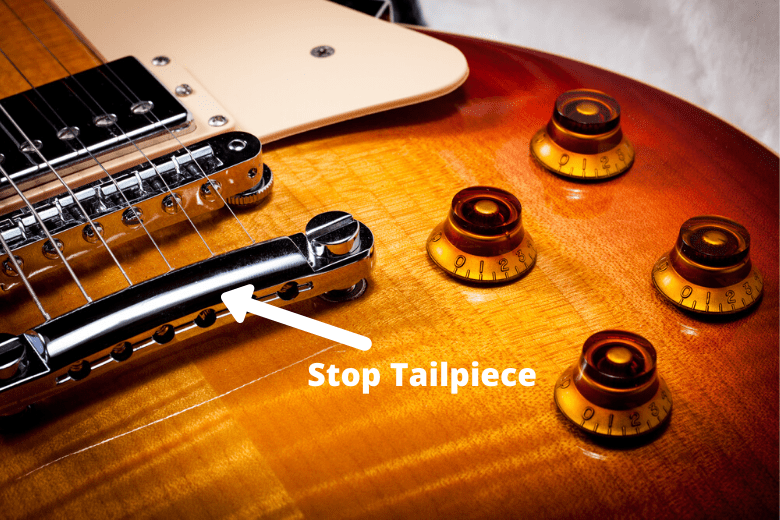 This design usually consists of a metal alloy shaped into a bar and fitted using screws into the body of the guitar.

The alloy itself often contains either zinc, brass or aluminum. Most guitarists prefer aluminum stop tailpieces for their vintage edge, lightweight build and good resonance.

The downside of using a stop tailpiece, however, is that the guitar strings can sometimes slip out of their slots and scratch the finish.

In particular, stop tailpieces are often used alongside a single bar bridge, made out of wood or metal.

Gibson also matches them up with their tune-o-matic bridges too. These offer some extra action and intonation control for guitarists that need precision thanks to having adjustable string saddles.

Stop tailpieces are best for beginners as they have a relatively simple design and easy to re-string. 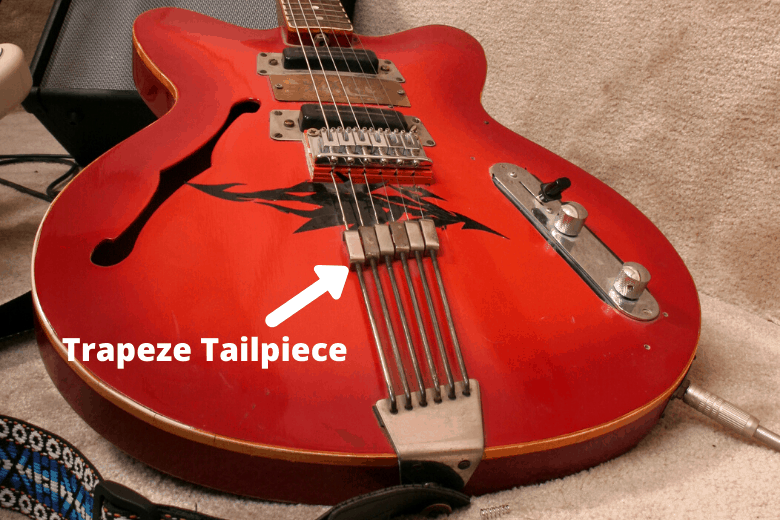 These tailpieces were the original version used on Gibson’s Les Paul, but are mostly found on hollow-bodied guitars like those produced by Gretsch or the Regent by Epiphone.

Trapeze tailpieces attach to the guitar’s heel and have built-in slots where the strings feed through. The strings here are used to suspend the tailpiece once they are tightened and set to the correct tension.

The trapeze design gives the strings more resonance than stop tailpieces and applies tension to the edge of the guitar instead of the middle. These tailpieces are harder to string than the rest, as the strings easily fall out of place whilst you’re tightening them, so not recommended for beginners.

In terms of sound, trapeze designs are best for guitarists that love country, jazz or blues due to the warm, woody tone they deliver. 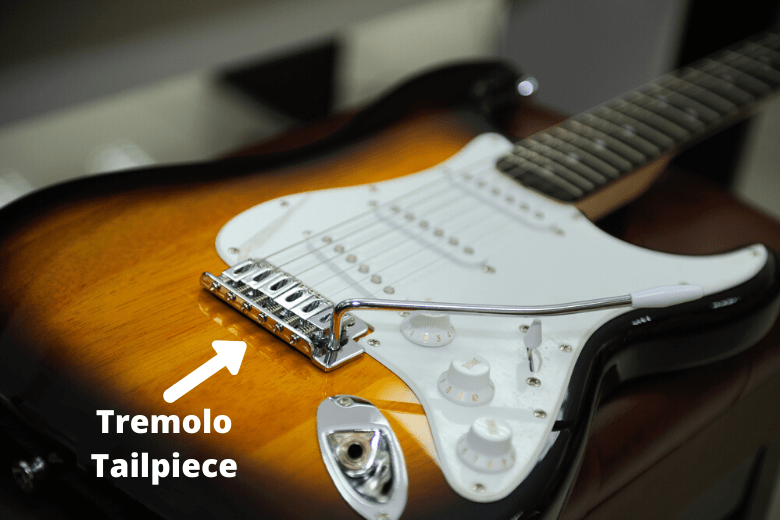 As you can see in the image above, the vibrato tailpiece is the type found on many Stratocasters but it’s called a tremolo. Confusingly, the makers of the Strat got their terminology wrong and called it a ‘tremolo’ when in fact it’s a vibrato!

The original vibrato was produced in the 30s by a man called Doc Kaufman. His idea featured a metal arm that could move the vibrato unit from side to side and vary the string’s pitch.  More modern vibrato tailpieces, however, are based around Bigsby’s design or through-body tailpieces.

To make things more confusing, different models can feature different mechanisms, including spring tension arms and pivoting bridges, like the Floyd Rose or Kahler units. Some vibrato tailpieces also have fine-tuners built into each saddle, for precision tuning.

The one downside with vibrato systems is that they can be tricky to set up and play properly (some also have a habit of knocking your guitar out of tune too).

That said, they suit blues guitarists (fans of Jeff Beck will know all about this) as well as heavy metal players who want to play pitch bends.

Here the guitar’s strings are held in position and then wrapped around a metal bar or smoothed off piece of metal.

Gibson started incorporating these into their Les Pauls during the ’50s and wrap-around bridges remain part of the Les Paul Junior and Special to this day.

The strings are fed through the tailpiece through the front, then are wrapped around the back and top section of the bridge and onwards to the neck.

These tailpieces provide less tension than the others we’ve mentioned and can be hard to keep in place whilst wrapping around the bridge.

As well as this, older varieties of wrap-around bridges offer little intonation adjustment, which can become problematic if you want to use a thicker or thinner set of strings.

On the bright side, many guitarists love them for the resonance and sustain they give out and the simplicity of their design.

There’s no right or wrong choice when it comes to choosing a tailpiece, but some are fiddlier to work with than others.

If you’re a complete beginner, a stop tailpiece is most likely your best option. These are easy to set up and to re-string, plus they also have a simple design.

If you want something that lets you lock in your strings and perform bends and dive bombs, then a vibrato Floyd Rose or a Strat would be a good option. Just remember, these designs are quite hard to set up and can have tension issues if you try to change your tuning above or below a semi-tone.

On the other hand, if you’re a fan of all things vintage or country music, then go for a trapeze tailpiece. These units work well with hollow-bodied guitars and provided the strings with a warmer tone.

Wrap around bridges are another option if you don’t fancy using a stop or trapeze tailpiece. Many folks swear by them for their sustain, resonance, and character, however, they have limited intonation adjustment.