The Guitar Volute Explained – Why its Required on Some Guitars 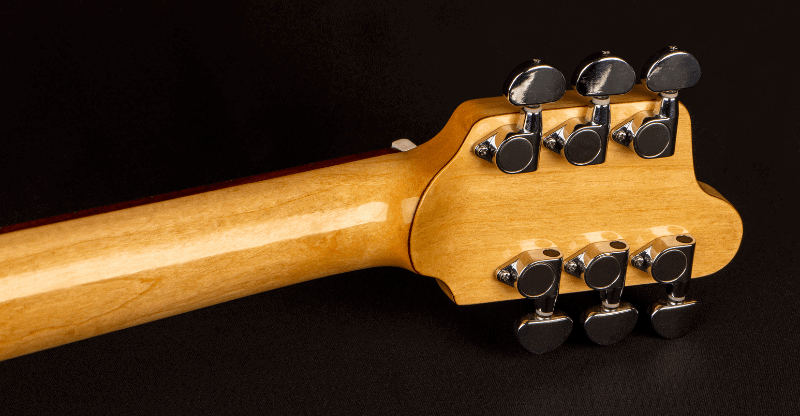 Like many things related to the guitar, the volute is one that divides opinion.

Many think they’re downright ugly, others find them rather nice. Some think they play a useful role, others argue they’re purely decorative.

In this article, we discuss what the guitar volute is and why it’s needed on some types of guitars.

What is a Volute?

First of all, what is it?

The volute, also known as a ‘carved heel’, is a protruding bit of wood carved into the neck. It’s located at the rear of the neck of the guitar, at the point between the headstock and the fretboard (see below).

Where does this obscure term come from?

The word ‘volute’ actually means a ‘spiral, scroll-like ornament’ and dates back to ancient times (it was used in classical architecture).

As for musical instruments, the violin’s headstock (the scroll) is a volute, and it’s believed this is where the guitar got the name from.

Early Martin acoustic guitars added them, and even when they started making one-piece mahogany necks, they still retained the volute (from styles 28 and higher – the big diamond volute used on many models is quite noticeable).

What Does a Guitar Volute Do?

The volute reinforces the guitar neck at it’s weakest point.

However, you only find volutes on guitars with tilted or angled headstocks as this style of guitar has a natural weak point where the neck and headstock meet which the volute strengthens (see below).

That’s why you find them on many Gibson guitars such as the Les Paul and Gibson ES-355 (see below).

This protruding bit of wood offers reinforcement at this weak point, especially when bending strings which add a lot of tension to the nut. It was why Gibson added a volute to their Les Pauls from 1969 to 1981.

The truss rod access area is also a point of weakness, and the volute also offers some strengthening there too.

You don’t find them on any Fender-style flat headstocks though (e.g. on a Strat or Tele).

Look below, you’ll notice there is no protrusion at the back. That’s because this style of guitar doesn’t need a volute in this location.

Why? Because as there’s almost no angle between the neck and the headstock on a Fender-style guitar, it’s a much stronger design.

So there you have it. Now you know why that bulging bit of wood behind the headstock is called a volute and you understand a little about the theory of how it helps with the stability of the neck.

Next time you see a Les Paul or Les Paul clone for that matter, take a look to see if you can spot it. Most guitars with angled headstocks have them, but you also find it on some acoustic guitars.