23 Songs from the Brilliant House of Gucci Soundtrack 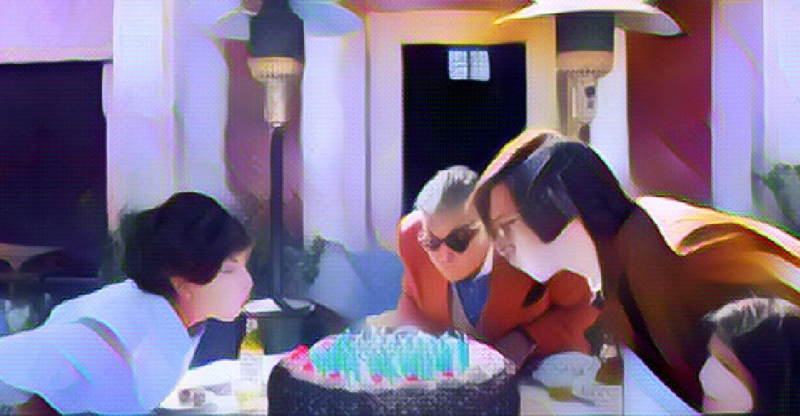 House Of Gucci follows Patrizia, played by Lady Gaga, as she makes her mark as a businesswoman and murderer. She comes from a lower-class world, but marries the esteemed Gucci family through Maurizio, played by Adam Driver (who she later ends up hiring an assassin for).

The House of Gucci soundtrack features great orchestral, operatic, and Italian songs that match the dramatic vibe of the film.

This retro-style song features overlapping vocals, funky bass, and ambient synth. It’s a follow-up to David Bowie’s hit song ‘Space Oddity’ that comes back to the character of Major Tom. In House Of Gucci, ‘Ashes to Ashes’ plays during a photoshoot for Maurizio. The line “ashes to ashes” previews Maurizio’s upcoming fate.

Related: You can hear ‘Space Oddity’ on our playlist of the best space songs.

This jazzy number plays during the Gucci and Tom Ford fashion show. It’s lyrically sparse to not distract from the show, but the few lyrics effectively add to the overall experience. The horns do a great job of providing a backing track to this extravagant display of wealth and style.

Related: Get dressed up and listen to our list of fashion songs.

This song is an Italian cover of the iconic track ‘I’m A Believer.’ Maurizio has decided to abandon the safety of his money and family to become an honest man for Patrizia, who he intends to marry. The song plays during his first day on the job, quite a big step away from the life he used to know.

Related: Put a smile on your face with the best happy songs.

On the Radio – Donna Summer

Maurizio and Patrizia meet at a costume party as ‘On the Radio’ plays. It starts as a soulful, stripped-back ballad but transforms into an upbeat dance tune when the drums and horns pick up. This song sets the scene for the joyous, lovesick start to the pair’s relationship (though this sentiment, unfortunately, doesn’t last long).

At the airport, Paolo is spotted by Aldo while on the phone. These two have a strained father-son relationship- Paolo’s ambitions are very out of sync with Aldo’s confidence in him. ‘Heart of Glass’ is all about a relationship that turns out to be way more trouble than it’s worth, a theme that certainly could apply to several relationships in the movie.

Related: Find this song on our family songs playlist.

‘Ritornerai’ is sung in Italian, and the opening lines translate to “you will come back, I know you will come back.” At first glance, this song sounds like a regretful lover’s lament—the narrator believes this person will return to him because he gave them a better life than freedom. But, the aggressive vocals and tension-filled strings add an ominous element to the song. In the movie, it plays as Patrizia, Maurizio, and Aldo go to the cattle farm.

The editor of Vogue, Anna Wintour, appears in this movie, played by Catherine Walker. Though she doesn’t have a huge role in the film, she’s a recognizable name that shows the level of success Gucci is quickly approaching. ‘Anna’ sings about a powerful girl the narrator is obsessed with but cannot be with. It emulates that untouchable feeling of someone with Anna Wintour’s status.

Related: Head over to our list of songs about loving someone you can’t have.

La Ragazza Col Maglione,’ which translates to “the girl in the sweater,” plays over the introduction of House Of Gucci. We are introduced to Patrizia as she walks past some of the people who work for her family’s business. The song is entirely in Italian and talks about a fascinating girl with unmatched elegance and style. Patrizia fits this characterization, and her commitment to this image will drive her choices throughout the movie.

This funky electronic song plays over several scenes, most notably when Patrizia reveals to Maurizio that she is pregnant. The song continues as the pair travels to New York, and the diverse instruments (strings, synths, and guitar) make it a great transitional song. “Talk to me like lovers do” relates to the stage of their relationship Patrizia and Maurizio are in.

Related: Going to NYC? Stop at our list of New York songs.

A Fifth of Beethoven – Walter Murphy

Paolo Gucci seems to be the naive, weak link of the family. He has ideas, but they are not really respected by other members of the family- especially his father, Aldo. This take on the classic piano song by Beethoven plays as Paolo is being fitted. It has both humorous and anticipatory elements as you wonder about this character’s incompetence and how much longer he will put up with the disrespect of his family.

Related: You can hear this song on our soundtrack list of Saturday Night Fever songs.

‘Paid in Full’ is about figuring out a scheme to get rich. It’s a comedic conversation between friends trying to figure out a plan for making money. The song most closely relates to Patrizia, who came from outside the Gucci family but was desperate to become accepted as a member. She was passionate about the company, but that passion often turned into manipulative and conniving plans to make more money and raise the prestige of Gucci.

Related: Chase that dollar with the best money songs.

I’ve Got Your Number – Bobby Short

Paolo and Aldo are talking on the phone when Aldo is arrested for tax evasion to the old-timey vocals of Bobby Short. It’s a dramatic song for a dramatic moment, and the line “we’ll break the rules a lot, we’ll be damn fools a lot” applies to Aldo and the Gucci family as a whole.

The operatic vocals and orchestral sounds of this song make the scandalous scene it is paired with even more dramatic. Patrizia and Maurizio secretly get intimate together in Patrizia’s father’s office. Their infatuation with each other is obvious, making their time together as transcendent as this song.

Related: Listen to similar songs on our playlist of opera music.

At a fashion show in Milan, Patrizia becomes more dedicated to revolutionizing the Gucci name, and she begins to plot to cut Paolo and Aldo out of the business. ‘Blue Monday’ is an electro-pop track that plays during the fashion show, with a steady beat suitable for strutting.

Related: Mondays are tough. Here’s our list of Monday songs.

This song closes the movie, following Patrizia as she is in court and continuing into the end credits. “Words don’t come easily, like ‘sorry.'” Patrizia is far from apologetic for all her crimes and the people she wronged. The acoustic style combined with opera singing captures an Italian style, along with the melancholy end to the movie.

‘Faith’ is Patrizia and Maurizio’s wedding song, which is fitting because the opening organs sound like church bells. This song hugged the top of the charts for a while, and the album won a Grammy, making it a popular and recognizable love song. It’s lighthearted and celebratory, a brief respite from the heavy plotlines of the movie.

Related: Sing along to this classic on our playlist of 90s karaoke songs.

It’s the Most Wonderful Time of the Year – Andy Williams

One of the most classic holiday tracks of all time, ‘It’s the Most Wonderful Time of the Year’ instantly puts you into a wintery, celebratory head space. It plays when Maurizio runs into Paola, his future mistress, while they’re skiing. The cheery song combined with the beginnings of an affair makes for an effective way to create cognitive dissonance in the audience.

Related: Snuggle up with our chilly list of winter songs.

This instrumental track is used during a scene of Patrizia and Maurizio kissing and in the end credits. It creates a wistful feeling in the audience and takes on two very different meanings in each scene. In the kissing scene, Patrizia and Maurizio are in love and hopeful about their future. In the end credits, we know this future completely imploded, with Patrizia orchestrating the death of Maurizio.

Patrizia and Maurizio dance together to the sound of ‘Disco Fever,’ a jazz-style track with many horns. There are no lyrics, and it’s a classic song perfect for a cinematic dance number. The pair is electric with sparks, and you can tell a deep connection is forming between them.

This song plays when Aldo, Maurizio’s uncle, shows Maurizio his new office. Aldo was the main person who supported commercializing the Gucci brand for the public and also advocated for the family to accept Patrizia as one of their own. An originally supportive family member, Aldo, is devasted after discovering Maurizio’s plots to remove him from the company- he certainly no longer feels any love for them.

Maurizio dances with Paola as this acoustic song plays. ‘Manha de Carnaval’ features a fingerstyle guitar, making it an intimate and peaceful song ideal for slow dancing. It contradicts the disco dancing between Patrizia and Maurizio, showing the difference between these two pairings and how Maurizio seems to be moving on from Patrizia.

Una Notta Speciale’ translates to “a special night” in English. The track sings about “strange women” with hypnotizing auras- perhaps something that could apply to Patrizia. In the movie, we hear this song as Aldo exits a store. The line “we love each other in a manner not known by the mind” is interesting when you relate it to the Gucci family. Strangely, they do love each other, but it’s an inexplicable kind of love that is muddled by the business.

When Patrizia discovers that their housekeeper purchased a knockoff Gucci bag, she becomes stressed and concerned about the market for fake Gucci products. Unfortunately, no one else seems very bothered by this revelation. ‘Cuidado,’ which means “caution” in English, is fitting for the problems soon to come out of this disagreement.