How to Get Your First Gig – Beginners Guide 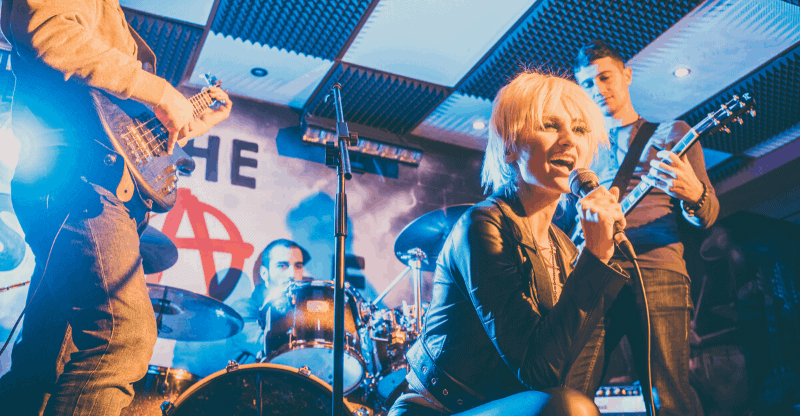 So, you’ve started (or joined) a new band. Or you’re a solo artist. That’s cool.

You’re well-rehearsed, have a decent few songs, and now you’re ready to hit the road.

The only problem…. you’re not sure how to get your first gig.

We’ve all been there.

At first, it seems impossible to book gigs for musicians.

But let me reassure you, with a bit of hustle you can easily find your first concert. You don’t need booking agents, promoters, or any of that razzamatazz.

In this article, we’re going to give you a blueprint for how to do it. Ready? Let’s do it.

How to Book Gigs

So, how do you approach a gig venue without getting laughed out of town? Read on my friend, read on.

We live in a digital age and whether you like it or, you’re going to have to learn some marketing (especially if you want to make it as an independent musician).

The good news is its never been easier to build some buzz.

In the old days, it was only through gigging that a band would attract some fans. These days, getting some interest in your music is pretty easy. If you have a new band, spread the word on social media. Twitter, Facebook, Instagram: make sure your band is on them all (here’s a useful guide to social media for musicians in case you don’t know how).

Offer teasers to your fan base that you’re soon to play your first set of live performances.

It doesn’t matter if you don’t know the fine details yet; get them hooked and feed them later. Sound excited in your social media posts; it’s contagious.

But, why does it matter, I hear you ask?

Well, because any venue owner is going to impressed if you have hundreds or thousands of fans, and you can leverage your popularity to get a prime slot on the bill.

Secondly, those fans are likely to turn up at the show and spend their hard-earned money at the venue’s bar, making the proprietor very happy.

On a practical level, this is one of the only sure-fire ways to secure your first set of bookings.

Many venues and promoters want to hear how you sound for themselves before they offer you the first show. It doesn’t need to cost the earth; a budget-friendly recording package can get across roughly how your band will sound live.

Many promoters will only listen to a short chunk of your song anyway, sorry. They’re busy. Just make sure it’s consistently good and a showcase of your best playing, and you can start to get excited about your first few gigs.

Promoters, venues, and your fan base are also going to care about what you look like. Do you look like a band? If not, you need to think about how to make that happen. You could all share one quirky item of clothing or even just a consistent style across the members.

It’s important to have something people can hang onto, and something that will obviously separate you guys from the rest of the crowd. The best way to do this is with your image. Get some pictures done, slap them together with a bio, and a demo and you have yourself a neat press pack.

4. Aim Low to Begin With

This should go without saying, but some people have been known to get carried away with themselves due to excitement.

If you’re booking your first gig as a band, you need to approach some down-to-Earth, local venues.

Of course, there’s nothing wrong with shooting higher, but doing that exclusively is unwise. Why not try your local pub or live music venue, where you already know the landlord or promoter, as a first hit?

It’s a good idea to knock up an editable email template, stating your band’s name, influences, and asking if they’d like you to send your demo.

It’s also advisable to say something about why you are contacting each particular venue as you email them. Think about it, offering a gig is very similar to applying for a job. It’s worth taking a bit of time to find out about where it is you’re approaching.

If you’re emailing a promoter, why not tell him/her about how much you enjoyed a show they put on?

This really is key to maintaining a healthy gigging schedule.

You need to talk to other musicians, bands, promoters, festival-organizers, venue owners, anyone you can hold of.

The truth is that people are always looking for bands to play events. Networking is the way to get on their radar.

Go to gigs, nighttime gigs, lunchtime gigs. As often as possible. As simple as it sounds, its a great way to make connections. Especially in large cities where there is a often a massive scene and an abundance of bands, artists, and promoters (try to befriend a venue owner too). It shouldn’t be too much of a chore :).

Carry business cards that include your website and email address. Cheesy as it sounds, it might score you a phone call back.

While it can be tempting to embark upon huge spamming sessions where you blast all local venues in existence with the same generic email message. However, this isn’t the best way.

Instead, find out about which venues/promoters put on your kind of band and send them personalized, direct messages.

A quick Google search for ‘gigs in [insert city] + [insert style]’ will bring you some relevant results. For example, if I had a funk band (oh, how I wish!) and lived in Chicago, I’d google ‘gigs in Chicago + funk’.

A thoughtful email is more likely to get you a response, listened to, and eventually offered a gig.

Promoters and venues receive loads and loads of messages from people wanting shows.

Most are just flat ignored. You need to show them that you stand out, not with some clickbait email subject line, but in a way that will stick in their head.

Maybe you could create a short tag line to describe your band, that’s catchy and creative? Perhaps you could include a quirky picture of your group that they’ll find it impossible to erase from their minds.

Remember, don’t be memorable for all the wrong reasons! If you introduce yourself with a rubbish sounding band name (or worse still, a name that’s offensive in some way) you won’t get very far.

If your band name isn’t fixed in stone yet (at this stage, it probably shouldn’t be), it’s worth making a shortlist of band name ideas and running them past friends, family, and any fans you’ve managed to acquire before you commit to any. It’s perfectly acceptable to change the name of your group a couple of times too before you settle on one that works (the Beatles started out life as The Quarrymen, remember!).

How Much do Gigs Pay?

If you’re in an original band (or a solo artist), who’s just starting out gigging music, the answer, I’m afraid, is ‘not much’.

Until you’re established, opportunities to play your original music before an audience are considered by many promoters to be a privilege. Rightly or wrongly, that’s the way it is. That’s not to say gig musicians should always perform for free, though.

Importantly, don’t fall for a ‘pay to play’ scam. These are unfortunately common in big cities like London and involve promoters selling tickets to new bands, for $50+. These are tickets that they’re unlikely to sell enough to get their money back. I don’t think any musician gigs more than once at a ‘pay to play’ venue. You learned about it here, guys, not the hard way.

On a more positive note, there are many pubs or bars that directly book bands or artists who can offer decent sums of $100 – $200 for you to play, especially if you take all your own gear. If you’re booking through a promoter, it’s often the case that they’ll give you some tickets to sell, then let you keep a percentage of the ticket sales.

If you don’t mind playing other people’s music (and you are good enough to play it convincingly) you can start charging upwards of $100 a night straight away. Cover or tribute bands are a ‘safe bet’ for venue owners, as punters are happier hearing stuff they already know.

Playing weddings is another option too and tend to pay better as newly weds tend to have a healthier budget. Many musicians see it as a bit of a sell out to play a wedding though, but it’s money all the same and it can be quite fun. Make sure you grab a guitar polish and give your equipment a quick buff before you show up though! You don’t want to upset the relatives 🙂

How Do I Get My First DJ Gig?

The majority of this article focuses on bands getting gigs, but it’s not exclusive to the musician. DJs can follow a similar route. The main thing is to have a great image, a professional manner, and – importantly – a mix or two uploaded to Soundcloud or a similar platform.

If you’re contacting venues to offer your DJ services, it might be wise not to let them know you’re new to it. Instead, offer your name, a link to your mixes, a professional picture of you DJing, and what styles of music you like to mix.

For each venue that you contact, focus on what you like about their venue and why you’re targeting them. They’ll appreciate the attention and it will make them more likely to book you than someone who just talks about themself.

I’m a Venue Owner – How Do I Book an Artist for a Show?

Maybe you’re on the other side of the coin – a newbie promoter, wondering how to go about booking a band for one of your shows. How do you know who to choose, and where do you find them?

Many of the answers covered above can simply be flipped around. Social media, networking, not being afraid of attending other promoter’s gigs are all important, as is a professional image and ability to talk to people.

So, there you have it, eight ways to find your first gig, and a stack of tips to get you off on the right foot.

It’s all about building a buzz, maintaining it through social media, networking with people, and doing the appropriate research before you fire out emails. If you follow these tips, you’ll be playing Carnegie Hall in no time :p

And what happens if, after your first gig, you realize your band name is all wrong? Then head over to our band name generator and find a new one. Simples!

Good luck, and have fun on the road!