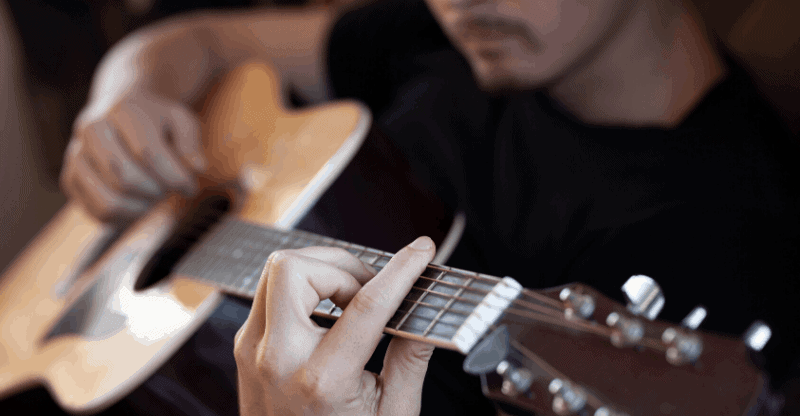 Barre chords have one simple benefit: they let you play any chord on the guitar with only a handful of shapes.

This eliminates the need to memorize – or maneuver into – lots of different finger positions.

]But people don’t just play them out of convenience, barre chords give you a different sound.

They avoid the ‘ringiness’ you get with open chords. You can dampen the strings too.

As a result, the sound is a lot clearer than, especially when played through effects like overdrive and distortion.

In this article, we going to show you the different forms they take and how to play them.

Bar or ‘barre’ chords are your open chords with a first finger bar across the top, letting you move the chord up and down the fingerboard.

Yes, they’re the same as open chords, just with a bar across them made by your index finger rather than the nut of your guitar.

Before we go on, let’s remind ourselves of finger numbers. 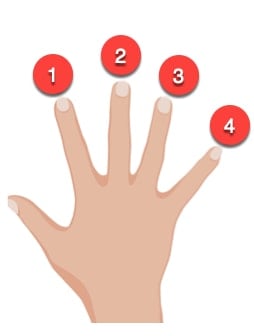 To play a full barre chord, your index finger (finger 1) will make the bar, while the remaining fingers finger the familiar open chord shapes.

The first shape is probably already familiar to you when you learned your open chords, as it’s the F chord that most people learn.

You can, of course, move it up the fretboard to create a major chord in any key you like.

Next, we have a five-finger bar. This is an open A chord with a barre above it.

Some people prefer to use just their ring finger or pinky to make the A chord. It just means that you need to avoid playing the high E string, as well as the low E string. 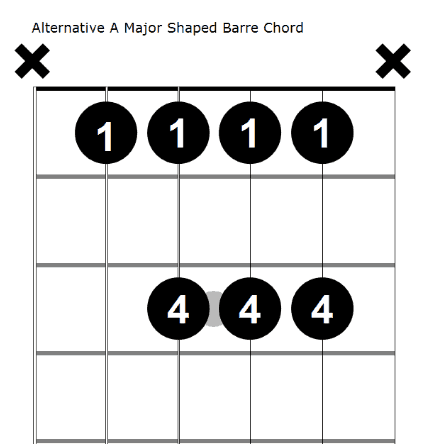 The A minor shape is identical to the above, but just with a flattened 3rd note to give you the minor timbre. 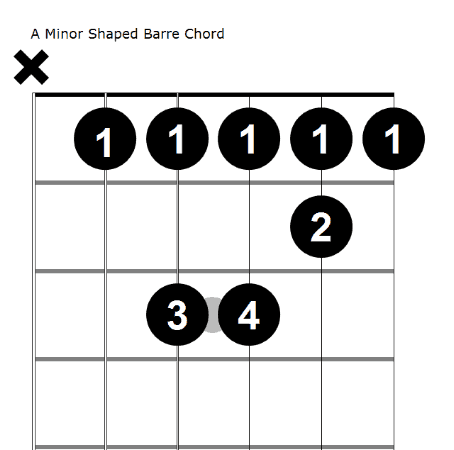 As you can see, fingers 2 – 4 make an E chord shape, while finger number 1 bars every string.

When you get the hang of changing between this one and your E major barre chord shape, you really can play a lot of songs.

This is a common chord progression, and has been used in songs including ‘Stairway to Heaven’, and ‘When Doves Cry’.

Now you know your shapes, it’s time to start moving between them.

Moving between different barre chords can take a bit of practice, but it soon becomes easy once your hand gets used to different shapes.

When you’re ready to mix them up, try the following progression:

This is the progression to ‘Hey Joe’!

But, how did I know where to go to find the barre version of these chords?

Probably the most important part of learning to play these chords is remembering where your roots are.

When you want to play a chord, simply put your first finger on the fret which is the root note of the chord, and make your barre.

Top Tips for Playing These Shapes

It can be frustrating, but the only way to really master your barre chords is to make sure they are really ringing out.

To do this, play one string at a time while you’re in the barre chord shape.

This will allow you to slightly adjust your fingers any time there is a muted note or odd sound. You’ll soon get used to the exact shape that your hand needs to be in to get it sounding clear.

There’s no universal way to do this: everybody has a slightly different shaped hand. Just find out what works for you.

Personally, I tilt my first finger to the side a little bit in order to get the notes ringing.

If you’re really struggling to get into the shapes, it could be that your finger is wrapped a bit too far around the neck.

Obviously, everybody has a different shaped hand, but even so, your thumb should be somewhere around the middle of the neck if you want to get into barre chord shapes with anything like ease.

Rather than driving yourself mad and wearing yourself out, it’s far more effective to practice short and often than for a long time occasionally.

You can set yourself a practice schedule of around 15 minutes a day, or you can absent-mindedly practice while you watch TV in the morning or evening. Whichever way suits you will work fine, as long as you do it!

How about some songs to help you practice these shapes? Each of these has chords that are close together, yet they still allow you to practice your changes.

Barre chords are an essential part of playing most genres of guitar, and once you master them they really do open up the doors of playing any song you desire.

By using these 4 easy shapes: E major, E minor, A major and A minor, and adding a barre to them with your first finger, you can open up the fretboard and literally play any chord.

Of course, these are all just basic chords. Sometimes chords have embellishments: they maybe 7th chords, 9th chords, sus4 chords or similar. When this occurs, there’s always an easy adjustment to make to your barre to reach it, but that’s for another article.

A good fretboard knowledge is what will really make your barre chord playing shine, so get memorizing those notes on your E and A strings.