How to Play Power Chords – A Guide for Beginners 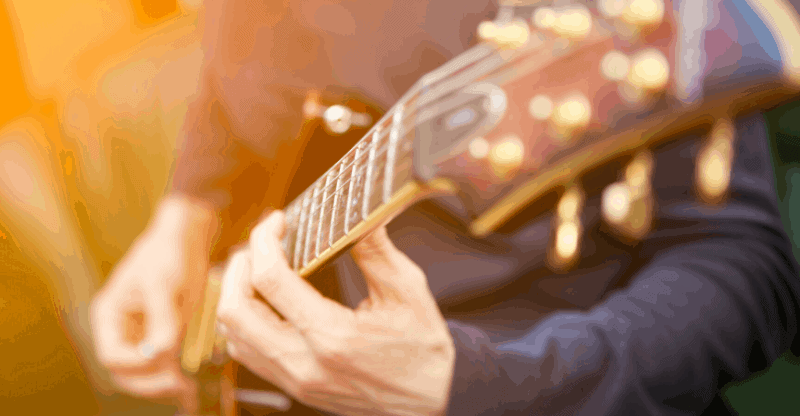 Power chords, technically known as ‘fifth chords’, are predominantly used in rock and metal music. They are called fifth chords because they are built from the first and fifth notes of a scale.

Once you’ve learned the basic open chords, they’re usually the next thing a beginner learns along with barre chords.

The good news is, with relatively little effort, they sound pretty cool.

In this article, we’re going to show you how you use them. We’ll show you the power chord shapes and how to play them.

Anatomy of a Power Chord

A power chord is named after its first or ‘root’ note.

Power chords can be spotted easily as they have a ‘5’ in the title – for example ‘C5’ stands for a power chord in C.

If we look at notes in the key of C, we see the C5 notes come from the root and the fifth note. The root note is often repeated (called the ‘eighth note’) to fill out the sound (but not always, as we’ll see below).

This two-note power chord only uses the first and fifth notes of a scale (it doesn’t repeat the eighth root note). This power chord shape is played with just two fingers. 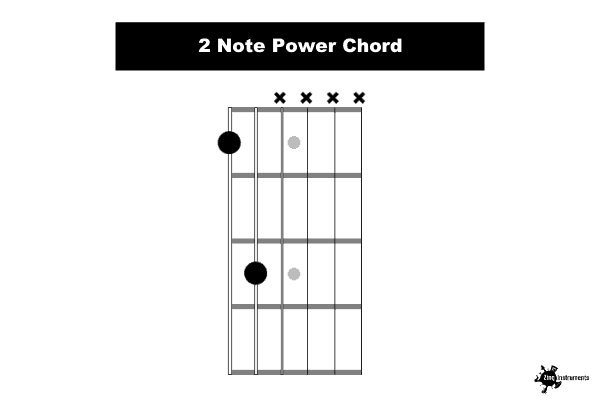 The three-note chord is the most common type. It’s the same as above, only the root is doubled an octave up (an eighth note) giving it a meatier sound. 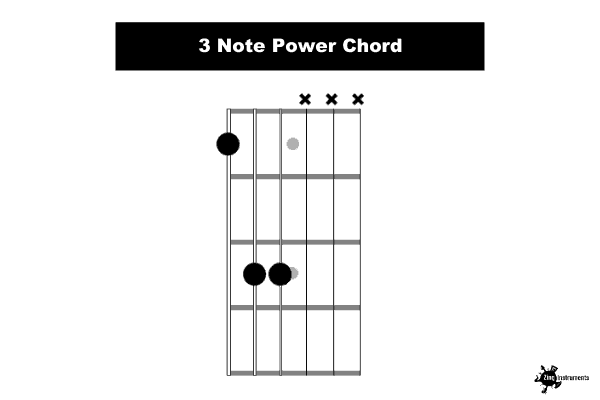 We’re going to focus on the two main ways to locate these chord, which is using the E or the A string. 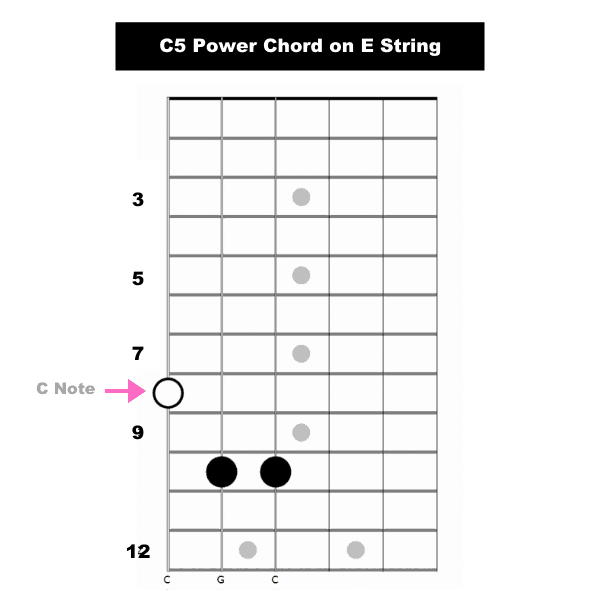 Using the A String

You can choose whether you play your power chord with the root note on the E string or on the A string. Where you play it on the fretboard depends on the song you’re playing and which position it makes sense to get into. Either way, the chord shape stays the same, wherever you are on the guitar neck.

See how we can play the same C5 chord using the A string as your root:

There are a couple of ways to play them.

Using three fingers. Your index finger on the root note, your ring finger should push down on the fifth and your pinky on the repeated root note. 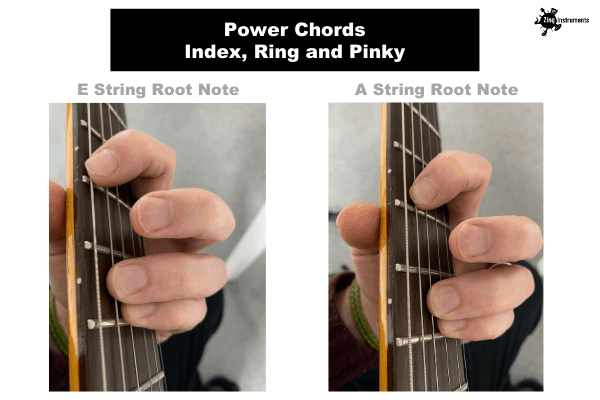 If you’re okay barring with your ring finger, this way might suit you more.

Like with the three-fingered shape, your index finger should play the root note. However, your ring finger can now cover the fifth and the octave. 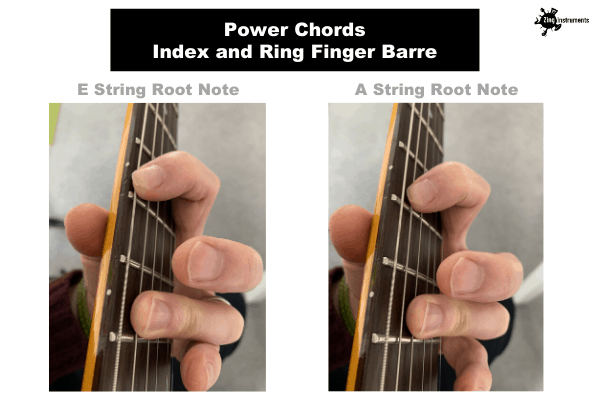 The index and pinky way is just like the index and ring finger way of playing a power chord.

Your index finger pushes down on the root note, whilst your pinky barres the fifth and the octave. It’s probably the easiest one to move around, but if you’re not used to using your little finger, it can feel weird.

It may take your hands some time to get used to the positioning and the friction of the guitar strings however, keep practicing and it will quickly become easy. All the time your fingers are developing muscle memory, and protective calluses. 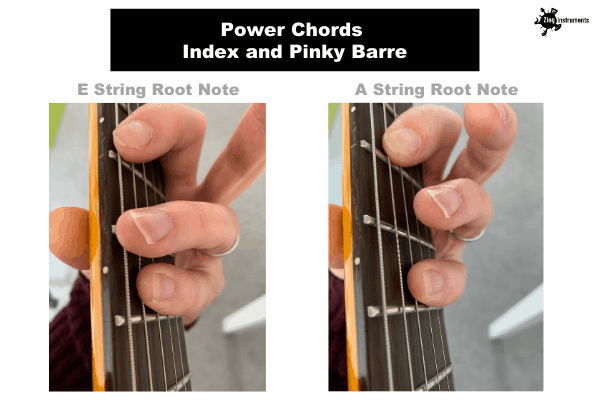 A final option is to use your index and middle finger. This gives you the added benefit of being able to use your ring or pinky to play the classic Chuck Berry rock and roll riff. 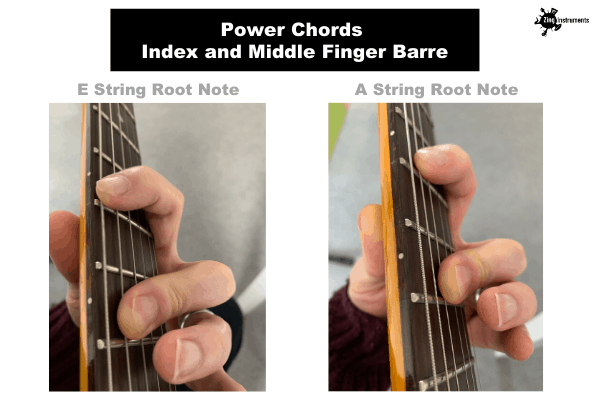 Unlike with some other chords, you don’t play many strings with these. Indeed, the only ones to strum are the ones that your fingers are touching.

You can strum hard and fast, for an aggressive, punky sound, or you can pluck the strings individually for something more mellow. You’ll also need to master palm muting. 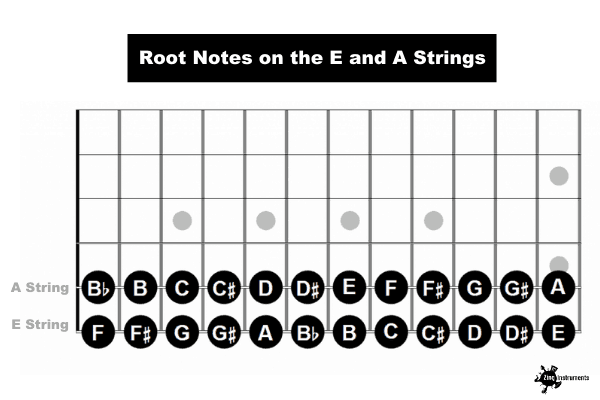 In the iconic Iron Man riff by Black Sabbath, guitarist Tony Iommi uses power chords B5, D5, E5, G5 and F#5 to produce a mighty introduction to their epic track. 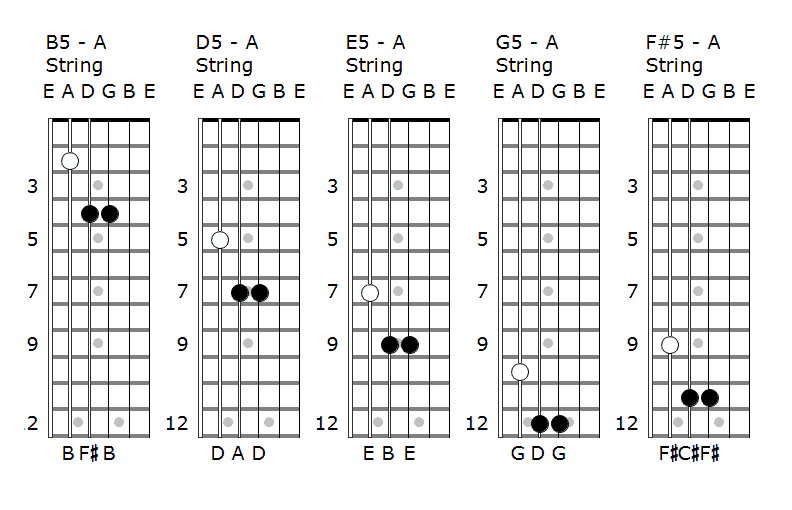 Another classic example is demonstrated in Smoke on the Water by Deep Purple. The G5, Bb5, C5 and F5 chords are often one of the first riffs a beginner guitarist learns.

In rock music, bands such as U2 also include fifth chords into their songs.

For example, in the hit single Vertigo, there’s an A5, E5, D5, G5 and G#5 power chord progression which creates a fun, sliding rhythm section. This works as a fantastic build-up to Bono’s “Helloooo, helloooo…. I’m at a place called vertigo!”

Although they lack the texture of major or minor chords, power chords are highly versatile for this reason. They can produce a powerful harmony and are popular in metal, rock, punk, and indie due to their simplicity.

They can produce different types of music depending on strumming technique, and once you’ve memorized your root notes they really can be your key to nailing fretboard knowledge.

How many power chords are there? There’s no definite answer, as it depends on how many frets you have, how many strings you have, and how you are tuned. On a 24 fret guitar, there are 49 notes. This means that you can play – if you wish – 44 different power chords!