How to Read Guitar Tabs – A Guide for Beginners 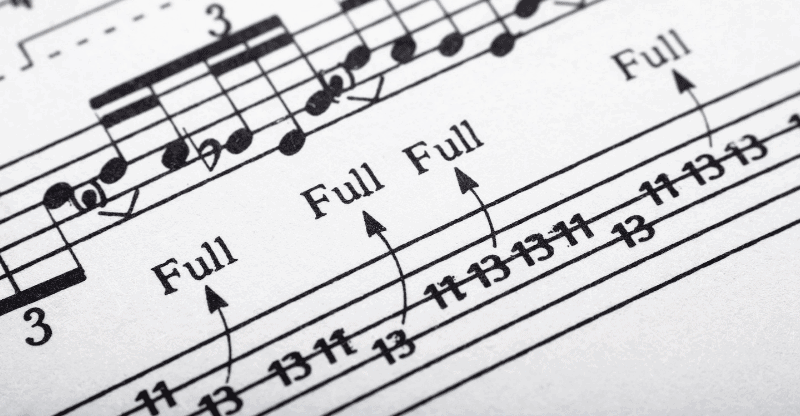 Chord diagrams work great for learning a lot of easy songs. However, guitar chord diagrams have their limitations and they don’t help you with figuring out melodies or lead sections.

That’s where tablature or ‘tab’ comes in. They give you a much better understanding of the song without needing to understand music theory or read sheet music.

It’s hard to get a feel for the rhythm from tab though (that’s the main downside). But if you just want to learn how to play a new piece of music and have a pretty good grasp of the rhythm already, it’s ideal.

In this article, we’re going to show you how.

Whenever a number appears on any of the six lines, it means ‘play that fret’.

Sometimes, you have multiple numbers on top of each other. This means you need to play them all at once (as a chord) like this.

As you can see, the chord names are also written above.

As well as numbers telling you where to put your fingers, there are also symbols that inform you which techniques to use as you play the piece. Here we’ll explore the most common.

Slides are commonly seen, and – like most of the other fundamentals – they are written in a way that is logical and easy to interpret.

See how, in the picture above, there is a diagonal line leaning upwards from 3 – 5 on the B string? That means slide up from 3 to 5.

Next to it is the opposite: a diagonal line leading down from 5 – 3. This means to slide down from 5 to 3.

Sometimes, you see slides annotated, but it doesn’t tell you where to slide from/to, like in the examples below:

A general rule when you’re not instructed where to slide up from, is to go from two frets before it. You can slide further if you choose, but two is almost always appropriate. When there’s a slide down, you can slide down as far as you like.

Bends are symbolized in a couple of ways. Sometimes, they’re simply written as a letter ‘b’, which is common in the kind of Tabs you get for free online. When they are written in this way, it might say, for example, ‘b9’. This means to bend the current fret (e.g. 7) upwards so that it reaches the same pitch as fret 9. It might be more specific, and say ‘bu9’, clarifying that your bend will be an upwards bend.

On more sophisticated Tabs, there are curvy arrows to signify bends, like this:

On the first example, you can see that it is a whole tone bend, the second, a halftone bend and on the third example a quarter-tone bend is what’s required. They’re all simple upwards bends.

Sometimes, you are required to bend up and then back down again, and that’s written like this:

On the kind of Tab where you’re only dealing with font, a hammer on is written as letters ‘H’.

When you have one which includes symbols, the two notes which are joined together via a hammer on have a curve above them, like this:

This is called a ‘slur’ in music, and the hammer on is what makes the notes ‘slur’ into each other.

Pull-offs are the opposite of hammer-ons, although they are both annotated in the same way: with a curve/slur.

If there is also a ‘P’ above or below the symbol, that’s one way to know it’s a pull off, but if there is no clarification it’s OK. You can tell it’s a pull off if the fret number goes down, e.g from 4 to 2. The symbol above will always mean to pull off from 4 to 2, with or without the ‘P’.

This wiggly line is telling you to do just that: wiggle your finger. It can take some getting used to, but once you get used to slightly wobbling the string, up and down whilst keeping your finger firmly against the neck, it’s a trick you’ll not be able to stop using!

Sometimes, you have a fast pull-off-y part which it’s impossible to play with just one hand. Unless you have freakishly long fingers. When you see a ‘T’ under a note, it means to tap it with your right hand. These are commonly (but not always) followed by pull-offs.

There are 2 main types of harmonics:

To play these, you put your finger gently on top of the metal part of the fret (don’t push down), and play the string. If you’ve done it correctly, you should hear a high pitched sound which continues even when you move your hand away. If you haven’t done it correctly, try again. You’ll soon get it.

Written as ‘AH’, to play these, you need to touch the string with the skin of your thumb as well as your pick. You can experiment with different ways of doing this, but the easiest is to hold the pick right down at the bottom, so you can hardly see the point poking through, and then to play. It might take several attempts or more, but you’ll start getting it, and the more times you achieve an artificial harmonic, the easier it gets to do one on demand.

Palm muting – written as ‘PM’ is exactly what it sounds like. As you play with your pick, you also mute the bottom of the strings, near the bridge, with your palm. This creates a muted, staccato, rocky sound, which is common in rock and metal music. After the ‘PM’ is written, there are ——- dash marks to let you know how long to palm mute for.

As well as palm muting, you also find fully muted notes represented by an “x” on a particular string. This indicates you should completely mute it so no audible sound is made from it. You often see this is strumming patterns and raked parts on lead lines.

Quite the opposite of palm muting is letting the notes ring. This is written as ‘let ring’ and, like with palm muting, there are dashes —– to let you know how long to do it for.

If you’re letting the notes you play ring out, that means you will need to keep your fingers on the frets for as long as possible.

When you see a ‘U’, it indicates a downstroke.  An upstroke is shown as a ‘V’ symbol.

Often, to play a song in the same key as the original recording, you will need to use a capo (doesn’t matter which type of capo you use). The fret that it’s on becomes your new ‘0’.

Similarly, some songs will require that you tune to something other than standard tuning if you want to fit with the recording. This is even more important when you’re using a capo; if your strings aren’t tuned the same as the Tab says, the frets you play will sound nothing like the song.

It will say at the top of your Tab if you need to tune to anything other than standard, e.g. “Tuning DADGAD”.

So, as we’ve discovered, Tab is a great tool for learning songs with. It’s always useful to put a song on and read the Tab, without playing along, before you try to tackle it on your instrument. This will let you see the parts that you hear them, and picture how they will be played.