How to Tune a Guitar – Step by Step Guide 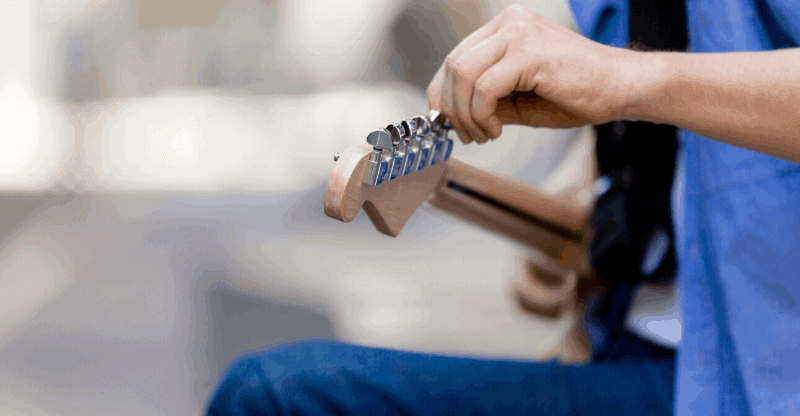 When you start out learning the guitar, knowing how to tune it properly is the most important thing you need to work out.

Regardless of which type of guitar you have, the tuning mechanism may be slightly different, but they all work more or less the same way.

In this article, we’re going to give you a step-by-step guide to doing it right.

We’re going to tune our guitar to what is known as ‘standard tuning’, which is by far the most popular.

From thickest to the thinnest, you’ll be tuning your open strings to the following notes: E, A, D, G, B, e (the high e is often written in lower case to differentiate it from the low E) 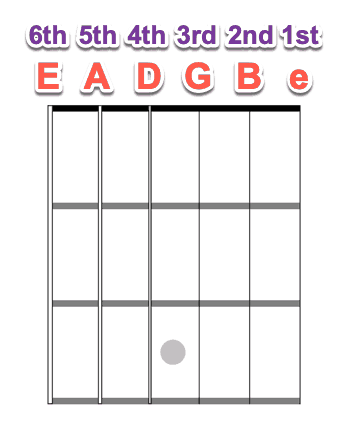 To adjust the pitch, you turn the tuning pegs.

Tuning a Guitar by Ear

We’re going to start with a method called relative tuning that consists of tuning the guitar by ear. It takes a bit of practice, but it’s important every guitarist knows how to do this – plus its great ear training.

Start with the bottom E string (the thickest one). Tune it to an E as accurately as you can using a tuning fork or instrument such as a piano. We’ll use this as a reference tone, and tune the other five strings in relation to it (hence the expression ‘tuning the guitar to itself’).

Now put your first finger on the fifth fret of the bottom E string. If you’ve learned your fretboard notes, you’ll know it’s an A note.

Keep your finger there, and pluck (using a guitar pick) the open fifth AND the six string at the same time, adjusting the machine head of the fifth string until the two notes are in harmony.

If you tighten the machine head, it will make the pitch go higher; if you loosen the peg, the pitch will go lower.

Put your finger on the fifth fret of the A string, that’s a D note. Keeping your finger there, play the open D (the 4th) and tighten or loosen the peg until you get both notes in harmony.

Put your first finger on the 5th fret of the D string, which is a G note. Keeping your finger pressed down on the G, play the open G (the 3rd one) and adjust the G peg until it’s in harmony.

Now the pattern changes. This time you press down on the fourth fret of the G string. Remember, the fourth, not the fifth like the previous ones. Keeping your finger in place, play the 2ns string and tune or down to match the note.

Finally, it’s back to the usual pattern. Put your first finger on the fifth fret of the B string, which is an E. Play the high e string and adjust accordingly.

Congratulations, you’ve just learned how to tune a guitar! You should have a perfectly in tune guitar.

If you’re still confused about how to do it, check out this video:

You can of course just use an electronic tuner to tune every string, rather than tune the guitar to itself.

Here’s how you do it:

There are a few types, so let’s take a look:

Microphone-based tuners use a mic to pick up the sound. For this reason, it’s essential that you’re in a quiet environment, away from background noise when you’re using one.

Like the vibration-based ones, they have a small screen and a dial or LED light system to tell you whether you’re in tune, or too high or too low.

Vibration-based devices are the ones you clip on to the headstock of your guitar. They detect the pitch and name of the strings through the vibrations they create and usually have a screen with a digital dial that moves into the middle when it’s in tune.

Because they work using vibrations rather than sounds, they’re very handy in noisy environments when neither you nor the microphone can clearly hear anything.

Plug-in/pedal tuners are the best kind to use on stage or in a noisy area and take the form of a foot pedal.

They work at the end of your pedal chain and can be activated at any time by a quick stomp.

These pedals also usually bypass the output while you tune. This is extremely useful on stage when you need to adjust your tuning without disrupting the performance.

Of course, there are plenty of tuner apps if you have a smartphone (I think the best guitar tuner app is Guitar Tuna, but there are many others).

These work in the same way as the microphone-based kind, picking up the pitch from your instrument using your phone or computer’s built-in mic.

Likewise, they’re only really a sensible option in quiet surroundings. Too much background noise will completely throw them out.

In a quiet environment, they’re a great option for practicing and free (although many have irritating adverts, that only disappear when you pay).

Also, remember most online guitar schools include a tuning app as part of the subscription.

There are also plenty of free online options, like our guitar tuner (but you’ll need internet access).

Ok, we’ve covered the most popular techniques. Here are some general ‘watch outs’.

Make it a Habit

It might seem like a chore to get your tuner out every time you’re about to play, but not only will this make you sound better, it will make you more efficient at tuning.

In addition, a guitar that’s regularly tuned will be more likely to stay that way as the strings get used to being at the correct tension.

The effects of excessive heat (humidity) are bad news for your guitar.

Extreme temperature affects wood and metal, so if you leave it in a hot room, or close to a radiator, the wood of your neck will get soft.

This softened wood can then be bent by the strings, warping the neck and making it more difficult to play or to hold its tune. It can also have a detrimental effect on the tone.

When a guitar gets hot, even if it’s not enough to warp the neck, the softness of the wood alters the tension of the strings, making them flat.

It’s best to keep your guitar in a stable temperature, that you yourself would be comfortable in for a prolonged period of time.

Similarly, if you allow it to get too cold, it’s not good either. The wood contracts in this circumstance, making the tension of the strings tighter which results in sharper notes.

Leaving it overnight in a car or garage is a big no-no during freezing months.

Loosening your strings before you take it on a trip will also help to prolong their life.

This saves them from being affected by things like temperature change or even snapping in transit.

However, you don’t need to loosen them on a day-to-day basis, or before traveling a short distance. They’re built with tension in mind, so only do this when you’re traveling long distances.

You can make a set of strings last surprisingly long if you keep them clean, but you’ll know when it’s time to change them as they’ll sound dull and will be constantly slipping out of tune.

When it comes to changing them, make sure you follow the correct method for changing strings, and you’ll be fine.