How to Tune a Violin – 3 Different Methods to Learn 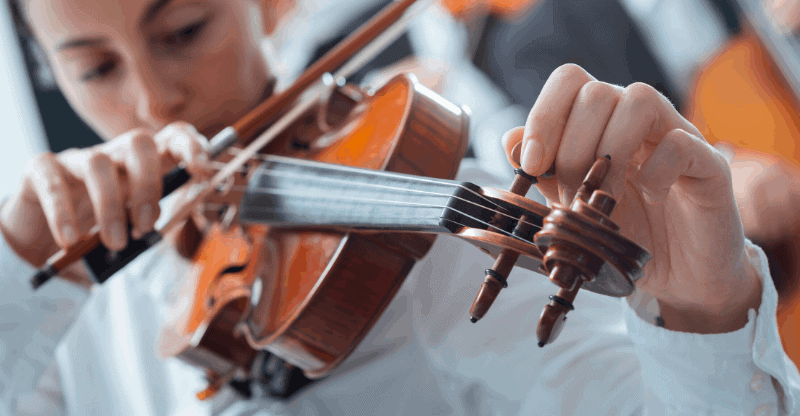 Despite its size, tuning a violin is trickier than, say, tuning a guitar, owing to the fact the violin is a slightly more complicated instrument.

In this practical guide, we show you the three most common methods that any beginner can use.

First, some basics. A violin has four strings of varied thickness. For standard tuning, these are tuned with an interval of a perfect fifth between each and organised in ascending order, from the lowest note to the highest: G (lowest note), D, A and E (highest note). 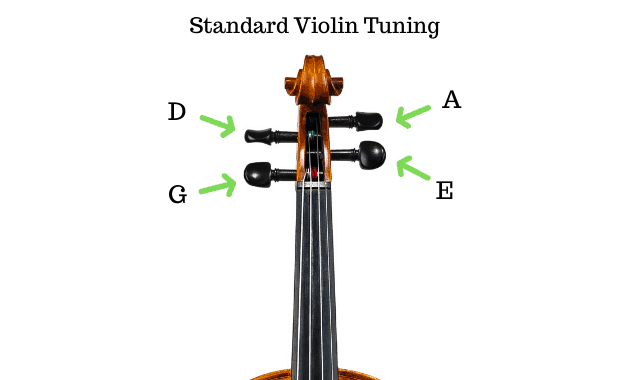 One of the factors making violin tuning tricky is due to the violin’s anatomy.

Basically, violins have two different sets of tuners, irrelevant of their size.

Experienced musicians tend to apply more control when handling the peg tuners, which exert a much greater tension on the strings. Therefore professional instruments often have just a single fine tuner attached to the E string. 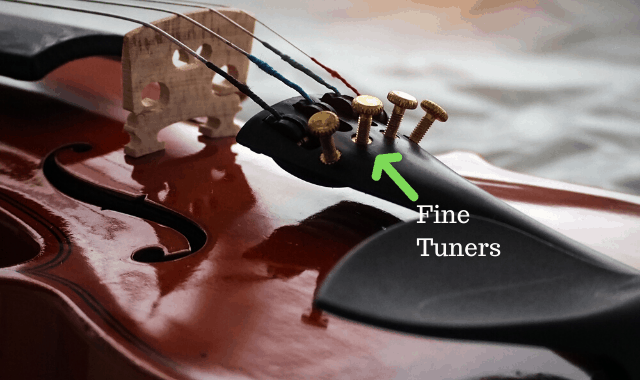 Using fewer fine tuners also reduces the violin’s weight and mutes the sound slightly. So some folks prefer to have less but gain tone and playability.

How to Tune a Violin – The Rudiments

When it comes to tuning your violin, in general, you should always start by focusing on the A string first, then the D, G, and E. As well as this, you should make sure to use the fine tuners rather than the tuning pegs to avoid damaging the strings.

The fine tuners will gently increase pressure on the strings, which helps to prevent any breakage. Remember to loosen the fine tuners before beginning the process to avoid starting off with too much tension.

If your instrument is severely out of tune then you can turn the tuning pegs very gradually, by a couple of millimeters, to adjust the pitch.

While playing a note, you should slide the bow across the string slowly as you tune. This lets you listen to the sound as you tighten or loosen the tuning devices.

Now that we’ve covered the general rules of tuning a violin we can take a look at some handy tuning techniques. 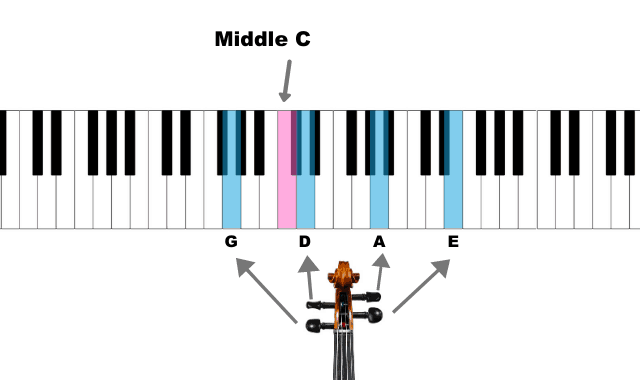 If you have a piano or keyboard at home, this can be a great way to get your instrument perfectly in tune.

Firstly, it’s important to find the middle C key which functions as a reference point for tuning to the correct octaves. Next, locate the A key, farther up the keyboard and tune the A string so that it rings out the same pitch as the piano.

Once you’ve done this, use the fine tuners to tune the D, G and E strings to the corresponding keys until you’re happy with the result. Remember that the sustain pedal of a piano can help the note to ring out for longer, giving you the chance to use your hands to play the violin.

Once you’ve had some practice tuning your violin, it’s worth trying out the relative tuning method. This involves matching up your violin’s A string to the A string of another, in say, an orchestra, or tuning the strings to your instrument’s own A string if you’re confident it is already perfectly in tune.

To start, play the A string and the D string simultaneously, whilst listening carefully to how the fifth interval between each note sounds. Once you’ve made any necessary adjustments to tune your D string, play the note together with the G string to make it ring out as a fifth. Finally, do the same thing with the A and the E string, until the E sounds well-tuned.

As a rule, strings tuned to perfect fifths should vibrate at the same frequency and should produce plenty of resonance, with similar decay time. This may be hard to notice initially, but with time and patience, you’ll become confident picking up these characteristics. 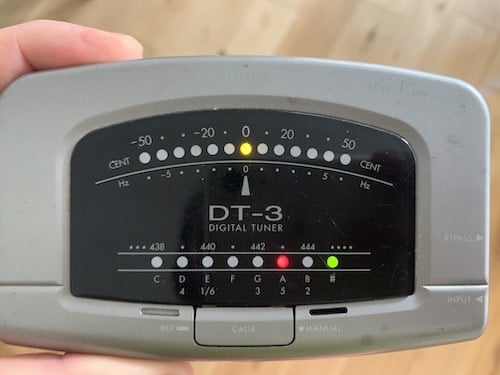 There are two main types of violin tuners out there; those that produce an audio reference note – in a similar way that a piano does, and those that respond to the note your violin produces by highlighting which pitch is being produced on a screen.

The most accurate way to tune a violin this way is to use a chromatic tuner made for guitars. These work by using a microphone to pick up and display the string’s pitch, even whilst the frequency changes as you play the note.

You could also try using an A tuning fork as a reference note. Simply hit the metal edges off the edge of a table and listen to the sound it makes, then match up the violin’s A string to get your desired note. Tuning forks are a relatively cheap option, costing a few dollars whereas chromatic tuners can be a little pricier.

Once you’ve tuned up, make sure to go over the strings again, as the can neck bend slightly due to the change in string pressure.

In classical music violinists rarely use alternative tunings during a performance. However, many styles of country or folk music will require your violin to be tuned differently if you want to avoid some extremely difficult chord positions.

For example, in country music, many musicians will their instrument or set their strings to be intervals of fourths apart, rather than fifths, to improve playability.

A common type of cross tuning involves tuning the G string to A, and the D to E, so that the violin is tuned A,E,A,E in ascending order. This lets you play songs in A major more easily. Some common examples of country or fiddle alternative tunings are known as; ‘Cajun’, which is tuned F,C,G,D, ‘Open G’ which is tuned G,D,G,B and ‘Gee-dad’, which is tuned to G,D,A,D.

Many of the best violin songs will be in standard tuning, so it’s best to get used to this style initially before experimenting with the varieties mentioned above.

Many novice violinists will initially blame themselves for any tuning issues that arise. However, the truth is that the peg itself or a poorly wrapped string can be the major cause.

If you’re finding your instrument just won’t stay in tune, the first thing to do is push the tuning peg into the pegbox a little harder. If this doesn’t work then check that your strings have been wound around the peg properly.

In particular, the string should rest very close to the inside wall of the pegbox as it leaves the peg to run down the neck. This, in turn, helps to secure the peg in place to stop the strings loosening.

You can also try removing a little of the lubricating fluid that coats the peg. Sometimes there may be too much or a lesser quality variety being used, so you could even try a different brand.

As well as this, occasionally a violin’s peg shaft may not quite fit the peg holes in the pegbox, so it may be worth taking your instrument to a luthier for an expert opinion.

We hope that’s given you three practical ways to tune your violin.

You won’t get very far if you don’t master this process, so be patient in the early days. It becomes second nature once you’ve done it a few times. And definitely remember to tune up before a practice session and obviously before a live performance!