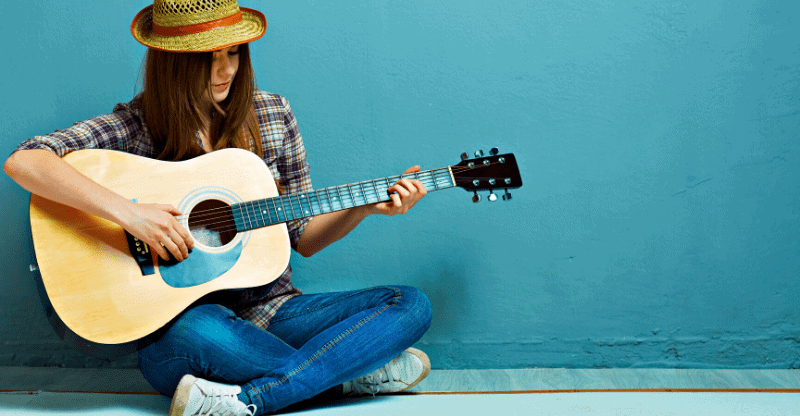 Many people think that writing songs is really hard, or only for ultra-talented musicians.

The reality is that anyone can write one. Your first attempt probably won’t match an Elliott Smith song, but every journey needs a first step, right?

So where do you start? Well, you’ve ideally already learned an instrument to an okay level and know a handful of basic chords. That helps.

You need to have a process for how to write a song because like most things in life when you pull back the veil there is a process you can learn – and if you do it well – it may get you results.

In this article, we’re going to show you the process that many songwriters have used to great effect.

1. Pick Your Genre and Structure

The first thing to think about is which genre you want your song to work within. Each genre of music (rock, country, jazz, reggae, etc) has specific features that are characteristic of that style.

Types of chords and arrangements vary from one style to the other. For example, jazz uses a lot of seventh chords, whereas rock uses power (or ‘fifth’) chords.

You’ll probably know what type of genre your music fits into.

For example, if you’re a country player it’s unlikely you’re going to want to pen a heavy metal track. But who knows! Often it’s good to break out of your comfort zone and write something that’s totally alien to you.

At this point, it’s also worth thinking about which structure you want. There are in fact a few structures to choose from, take a look below.

2. Work out a Basic Melody

You may already have a basic melody in your head. If so, great.

Try building on it, playing it up and down the fretboard or piano, in different keys.

If you’re familiar with scales, or modes such as the Lydian or Dorian (which are great for finding new ideas), use these to come up with something interesting.

The most important thing is to experiment with different melodies until you find one you love.

If you don’t have the melody yet, don’t worry, it often comes later once the chord progression and strumming patterns are established (see below).

Like the melody, you may already have a few chords that work together.

If so, perfect. Use the circle of fifths to help you build and develop the chord progression and try transposing the progression to different keys.

Maybe your chords sound far better in a different key. You can also alternate between major and minor keys within your song which helps to convey different feelings within one piece.

Make sure you listen to chord progressions used in different genres and use these as a source of inspiration. Some of the changes from another progression might help you shape yours.

Hint: Once you’ve worked out a progression you’re happy with, use a song key finder to work out what key it’s in (if it’s not obvious).

It’s not all about the chords you use, it’s the rhythm you use to play them.

Unless you’ve made a point of learning new patterns, you’re probably just using the same one or two you’ve always used.

Listen to as many different strumming patterns as possible, and when you find one you like, try matching it with your chords above.

You’ll be surprised how playing around with different patterns gets the creative juices flowing.

If your song is to have lyrics, now is the time to think about what words and catchy phrases work with it.

Here are some themes you could sing about:

Most great lyrics use emotion and emotional language to resonate with the listener. However, some would argue you shouldn’t worry too much about the precise words and phrases (of course, many great songs don’t have any lyrics, and work awesomely as background music for working out or concentration.)

Here’s a funny story. When Paul McCartney wrote Yesterday, it started off about scrambled eggs. His first words were “Scrambled eggs / Oh my baby how I love your legs / Not as much as I love scrambled eggs!”.

As you see, in the beginning, getting the melody is far more important than the meaning of the words and helps to get an idea of how the lyrics and music could work together.

It’s also helpful to step back and think about the narrative structure of the piece.

This is called ‘the narrative arc’ – and is the story of the song.

Not every tune has a story, but many, many do so it’s worth learning about. Here’s how it looks.

And here’s the most popular structure (see above), plotted on this chart.

At this point, you have enough to record a rough draft. Like most people, you probably have a smartphone – the good news is smartphones are perfect for recording your rough draft – just use the voice recorder that comes with the phone.

The point here isn’t to record a polished version of your tune.

It’s simply to get an idea down. You may never even listen to it again, but the act of recording forces you to focus and perform it, even if it’s just to an audience of one.

It will still help to solidify the idea or make you realize the idea needs more work.

7. Lay Down the Track Properly

When you have an idea that you think is worthy of recording properly, it’s time to lay it down properly.

You have a couple of options for recording: you can use a standalone multi-track recorder which are sort of old skool these days, but still have their advantages (way more mobile than using a computer, and less fiddly).

The second option is, as you probably guessed, is to use a laptop and a digital audio workstation (known as a ‘DAW’) to build your own home recording studio.

The second option costs more money and has a steeper learning curve, but ultimately learning music production skills will stand you in good stead for the future.

Here are some more tips for songwriting.

Many artists can write a song in minutes, for others it can take months if not years to write something worth exhibiting.

The common misconception at least is that the best tunes are written in some five AM drunken stupor.

Some of the best tracks may have come about that way but these days we’re well versed in how important getting a good night’s sleep is.

According to social media scheduler Buffer, we are at our most creative 2 hours after we wake up – so start when you’ve gotten up, had breakfast and feeling energized.

Talking of good habits, regular exercise, whether that be a walk in the park or a cardio drumming session (yes, that is a thing), gives you a natural high and releases serotonin.

While you’re still in the afterglow of this buzz is the perfect time to work on your material.

You know many of the best music has been borne out of collaboration with someone else. Think Lennon-McCartney, Morrissey-Marr, Jagger-Richards.

However good you think your writing skills are, you’d be surprised by how bouncing ideas with a musician friend will fuel the creative process.

It’s no accident that so many bands jointly take the songwriting credits.

Listening to great music helps to inspire you to write your own material.

We don’t want to blindly copy, definitely not, but studying music by ‘the greats’ – whether that’s a famous violin concerto if you’re into classical music, or a Metallica riff if you’re into hard rock – and analyzing how it works is an awesome exercise (and is actually part of a decent instrument practice routine).

Even Bob Dylan allegedly starts his writing sessions with a few minutes of meditation while listening to a track that inspires him.

So next time you’re out singing karaoke songs, pay attention to what works.

The final point is arguably the most important: experiment.

Not only try new times and places to write but try different gear too.

If you’re a singer, you could try a vocal harmonizer or pitch corrector to see what vibe that brings to your tune.

Devices like vocal loopers are a great too, letting you try out new rhythms, time signatures and melodies on your won without the need for a band.

The writing process can be a long, drawn-out affair, and talking of the elusive muse, Bob Dylan said it “cannot be willed, only welcomed”.

The important thing is to stick with it.

It’s a skill that, like any skill, needs to be honed. Another peer of Dylan’s, Neil Young, points out that failure is part of the process.

“Trust yourself and accept failure as part of the creative process. This will help you overcome your fears and realize that no-one else matters when you’re songwriting. You must be ready for the moment when inspiration takes over, grab it and keep it!”

Now go and write the next Rockin’ in the Free World 🙂