Humbucker vs Single Coil Pickups – What are the Main Differences? 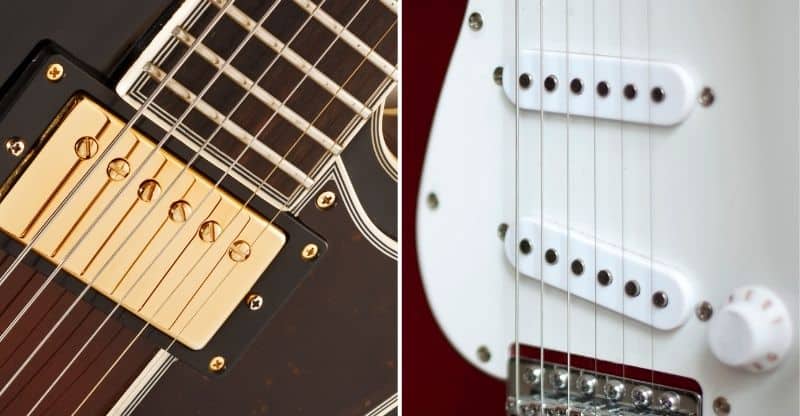 A lot of things make up the sound of electric guitar, but none more so than the type of pickup you use. When it comes to pickups, there are two main types: the humbucker and the single coil pickups.

It’s often not obvious which you should choose, so in this article, we give you a walkthrough of the main differences between the humbucker vs single coil.

First, a little bit of background behind each.

The single coil was the original pickup, invented by George Beauchamp (with help from Adolph Rickenbacker) in the 1920s.

They started looking at ways to make the guitar be more audible in band settings (up until this point, the guitar was always an acoustic instrument and often got drowned out by the rest of the band, especially drums and horns).

At first, they tried simply micing the guitar up, but soon saw this was sub-optimal in terms of sound (as well as created a lot of feedback) and they realized they needed a way to amplify from the instrument itself.

The electric pick up consists of two U shaped magnets with several thousand turns of fine copper wire wrapped around them to create a magnetic field (the magnets are made of magnetized steel or alloy such as alnico, neodymium or cobalt).

This process basically made the pickup into a transducer, able to translate acoustic waves (from the strings) into electrical signals.

The more wraps of copper wire around the magnets, the higher the frequency response. The greater the number of wraps, the louder and more gain it will have (also known as making it ‘hotter’).

The humbucker was an evolution of the single-coil, invented in the 1950s by Seth Lover at Gibson. As we’ve seen, single coils are susceptible to picking up electromagnetic interference noise. This was an attempt to combat the amount of hum you get (hence the name ‘humbucker’, literally to ‘buck the hum’).

The design consists of a pair of single-coil pickups mounted together, which reverses the polarity of one of the magnets, and connects the coils in a series – and voila, the hum vanishes. Pretty clever, eh!

As there is more magnetic pull and a bigger coverage area, the strings tend to vibrate less so there’s less treble and more mid-range and a fatter sound.

In the next section, we’ll compare and contrast the two pickups in more detail, and they both have unique characteristics that are both desirable in their own right (neither one is better than the other).

Let’s start with the tone, as that’s the biggest difference.

Single coils have a very narrow path that picks up the string. As a consequence, there is less magnetic pull which lets the strings vibrate more than a humbucker does.

This results in a much greater tone clarity and tonal response than a humbucker. The bright, bell-like chime that’s so characteristic of the single coil. Even in the neck position (that’s typically got more low end) a single coil will sound more trebly.

The downside is because they are a magnet they can pick up interference (hum) known as ‘60 hertz hum’ from lights, computer screens, and even the earth’s magnetism (that last one is hard to avoid!). Especially if there’s lots of gain.

As well as being much quiet, humbuckers have a warm, full, and thick sound and make the notes more rounded. They put an emphasis on mid-range

So there you have it. Both pickups have their own unique characteristics and while you can get modern humbuckers with ‘coil taps’ that turn them into single coils for the best of both worlds, nothing really competes with the real deal.

Here’s a quick summary for you: