Ibanez TS808 Review – The Tube Screamer is Alive and Kicking! 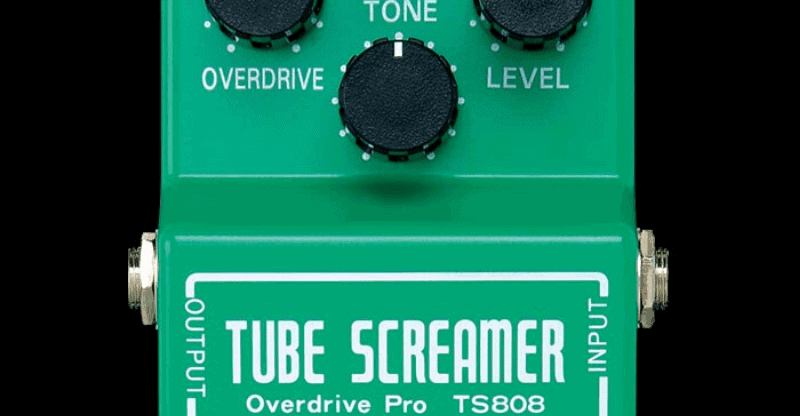 The Ibanez Tube Screamer TS808 is widely regarded as the pinnacle of all modern drive pedals and for many years was the best overdrive pedal money could buy (many would say it still is). Want to know what all the fuss is about? Keep on reading, we’ve got you covered.

Any product that has been around since the late 1970s must be doing something right. There is an awful lot to be said for longevity, after all.

With three controls, the TS808 has ease of use on its side, with a metal casing ensuring that owners will feel comfortable throwing it around at gigs.

If you’re a performer who likes to push your guitar to its limits, while playing with plenty of overdrive, Ibanez have created the perfect pedal for you, at a reasonable cost.

The TS808 is the original inspiration for an array of overdrive pedals, and it isn’t difficult to see why. The original product can be acquired for an extremely pretty penny. However, if you’re working on a tighter budget, this modern version really does achieve that same sound quality, without breaking the bank.

That screaming green color that is so synonymous with this pedal remains, and we just love that.

Countless famous musicians opt for the TS808. If it’s good enough for them, what is stopping you?

Key Features at a Glance

Here’s what we’ll cover in this article:

About the Ibanez Tube Screamer TS808 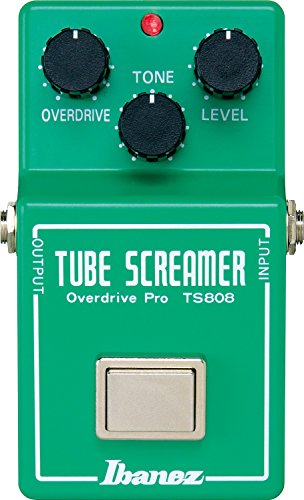 The Texas man responsible for the closing riff in David Bowie’s legendary 1983 track ‘Let’s Dance’ isn’t the only famous musician to have turned to this Ibanez pedal. The likes of Alex Turner, Rory Gallagher, Gary Moore, John Mayer, Joe Bonamassa, Eric Johnson, and John Norum have also trusted in the TS808 to accompany their sound. Not bad company you’d be keeping, is it?
Ibanez themselves are one of the most recognizable names in the guitar industry. From Japan, they have been major players ever since the late 1950s.

By the mid-1970s, they launched a new line of pedals in conjunction with Maxon. The Phaser, EQ, and Compressor were some of the original designs and can be credited with inspiring some of the features that make the green machine as popular as it is today.

The TS808 came along a few years later and was in circulation between 1978 and 1982. That explains why it is so difficult to get your hands on an original. However, if quality takes priority over anything else, the re-make is just as impressive.

If your guitar sound is reliant upon a tube amp, the TS808 produces a distortion better than any other pedal out there.

With the same chip and analog circuitry as the original, there has been no compromise on sound made here. From blues to jazz, rock to heavy metal, Ibanez have really knocked this one out of the park.

Guitar players that love to push the boundaries of their pedal box can even hook this beauty up to an amp’s distortion setting, producing an unmistakable valve tune.

It sounds great with all of the popular amps from the likes of Fender, Marshall and Mesa Boogie.

If your tone is suffering from a lack of undeniable warmth, or you’d like to take your sound to the next level, the TS808 is the Tube Screamer to take you there.

The TS808 really is a simple stompbox, designed with the same square footswitch as the original. Being accompanied by a tube amp really helps to bring out those screaming sounds, and it couldn’t be easier to do.

With just three controls, the ability to fine-tune the tone is a real plus for those looking to perfect their sound. Adjust your overdrive, tone, and level at will with a simple turn of a knob.

The LED indicator also shows how effective the Tube Screamer is performing in terms of usage while allowing you to keep an eye on that battery life.

Its simplistic design is a key reason as to why the Ibanez TS808 remains at the top of the class to this day.

If we were being particularly picky and had to highlight any slight issue with the Green Machine, it would be in its versatility.

With just one output, the TS808 is perhaps less suited to players who want more control over their EQ.

Still, guitarists of all genres can use this pedal to its full capacity, so perhaps we’re being picky?

It can be left on to compliment an overall electric sound or used to boost solos or rhythm sections.

In reality, the TS808 is a classic foot pedal, with very few cons.

Guitar fans will recognize the unmistakable look of the TS808 from the very back of a gig venue. Its green cover screams at you and you really can’t miss it.

As previously mentioned, the square footswitch is the same that is used on the original. The pedal itself is extremely sturdy and durable, allowing players to really go full throttle without having to worry about potential damage.

Its miniature size and minimal weight make the TS808 one of the more compact pedals out there. As a result, it is easy to carry around and set up – perfect for performers on the road.

To top it all off, its rugged rubber stopper offers that additional confidence in durability. Go and play your heart out without worrying about what is going on below you. Ibanez have taken care of that for you.

Have we mentioned that the newer models of the TS808 replicate the originals from back in the 1970s? It’s an important point to make, as any product that can remain as popular, if not more, today as it was over 40 years ago, has done something right.

The Japanese manufacturers have left no stone unturned with the build quality here. The zine die-cast helps to ensure that scratches and bumps acquired over the years are kept to a minimum.

The knobs to adjust your sound quality are all easily accessible, at the front and towards the top of the box – exactly where you would want them.

It has been brilliantly put together in a sturdy metal casing – even the heaviest of metal players would have a tough time damaging this TS808. Its stompbox size means that it is easy to fit in your pedalboard. Overall, they’ve nailed it.

It may be more expensive than your average stompbox, but that is to be expected when dealing with a product of this quality. What’s more, over four decades of accompanying guitarists proves that Ibanez have got this one spot on.

In reality, cult costs, and the TS808 certainly has a cult following in the music world. It isn’t difficult to see why though, there just aren’t any flaws to this little green bundle of joy.

Our advice would be to avoid looking for a cheaper alternative. The chances are that it will become damaged over time or that you won’t be satisfied with the overall sound quality, and then be back on the market looking for a new pedal.

We would recommend that you pay that bit extra to guarantee quality. The sound really does speak for itself.

In case it isn’t clear, we’re huge fans of the Ibanez TS808. It has stood the test of time and shows no sign of going out of fashion now after over four decades of helping guitarists achieve that optimum sound.

Yes, you may pay a little bit more than you would for other foot pedals, but there is no compromise on quality here.
Traveling musicians should take note of how easy it is to transport. You can perform until your heart is content without having to worry about quality of sound, internal or external damage, and the credibility of your pedal of choice.

The untrained music fan will love the sound, while keen guitarists will recognize the legendary stompbox at your feet and immediately respect the music. It’s a win-win.

Some of the most recognizable guitarists of our time, and even times gone by, have trusted in the Japan model, and you should too.

The look is iconic. The sound is unquestionable. The history is unrivaled. Make the Ibanez TS808 your foot pedal of choice. It won’t let you down.