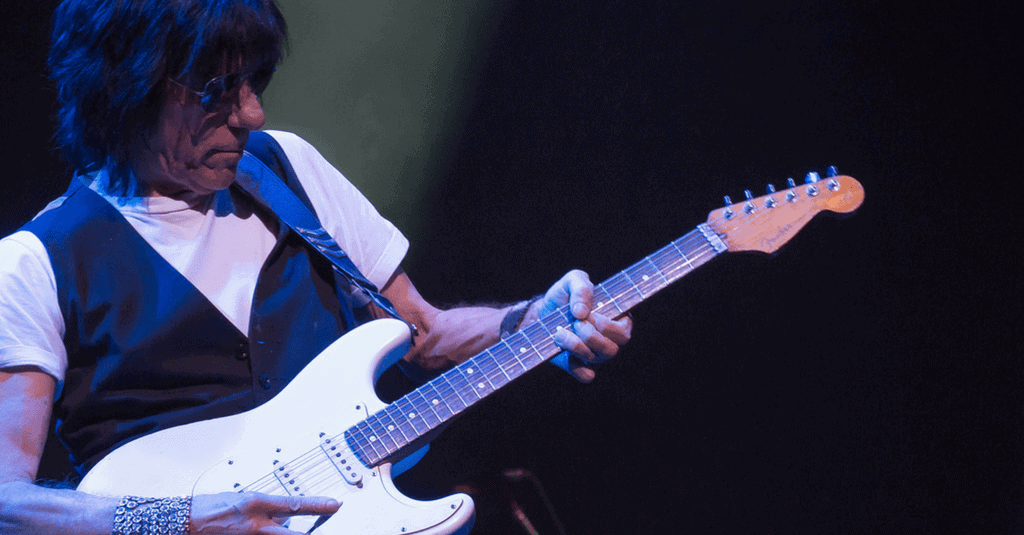 Beck is the guitarist’s guitarist.

He has never achieved the mainstream success of his contemporaries (like Eric Clapton and Jimmy Page), but pretty much every guitarist who knows their stuff will say he’s an exceptional force.

He was named the fifth best guitarist in the world by Rolling Stone Magazine, but who cares about polls.

Many consider him the best living guitarist, and it’s hard to argue otherwise.

To help you learn how to sound like this incredible guitarist, we’ve compiled this gear guide and we’ll talk you through a lot of his signature set up.

But first, sit back and listen to the master in action at Ronnie Scotts in London:

Before we jump into the gear he used, let’s talk about how he got his start and what he’s accomplished.

Born Geoffrey Arnold Beck, he was born on June 24th, 1944 in Wallington, England. Beck’s first foray into music began with a stint singing in the local church choir. By all accounts, Jeff was a wonderfully weird kid.

He first learned to play guitar by borrowing a friend’s in high school and then attempted to build his own by bolting a cigarette box to a fencepost.

While studying at the Wimbledon College of Art, Beck played guitar in a few groups including Screaming Lord Sutch and The Savages and The Nightshift before leaving to join The Tridents in 1964. In the biography, Beck was interviewed saying that The Tridents was the first band he was a part of that gelled with him musically:

“They were really my scene because they were playing flat-out R&B, like Jimmy Reed stuff, and we supercharged it all up and made it really rocky. I got off on that, even though it was only twelve-bar blues.”

Then, in 1965 under the recommendation of his friend Jimmy Page, Beck took over Eric Clapton’s guitar duties for The Yardbirds. Though Jeff only played with the group for twenty months, most of the band’s Top 40 hits were recorded during this period.

It’s also remarkable to note that these songs came from the lone album Beck managed to record with The Yardbirds, titled Roger the Engineer, which was named Over Under Sideways Down in the United States for some reason.

His short tenure with the group ended suddenly during a U.S. tour. The band decided to fire him for his explosive temper and habit of missing practices and shows.

For the next 60 years, Beck led an extraordinary and sometimes troubled solo career, making music via his own band (the Jeff Beck Group), playing with Rod Stewart (check out the eponymous album ‘Truth’) and even appearing again with The Yardbirds on stage in the ’80s.

He was notably busy in the ’90s and worked with everyone from Kate Bush to Guns N’ Roses. In 2009, he was inducted to the Rock and Roll Hall of Fame as a solo artist, and a year later, his album was released to critical acclaim.

Beck is unique in how he approaches his playing. His characteristic sound comes in part from his whammy bar technique – with the tremolo bar positioned at an acute angle, he plays vibrato with the heel of his palm.

He uses the pinky of his right hand to violin and change the tone through the electrics, producing a swirling, ethereal sound.

JB played with and still owns one of the most impressive collections of guitars in the world. While touring with The Yardbirds and The Walker Brothers in 1965, he picked up a 1954 Fender Esquire. He bought it from John Walker and it quickly became his favorite.

By all accounts, the Esquire was hugely influential in Beck’s early career and was heavily featured in his short tenure with The Yardbirds.

It was stolen on another tour with The Yardbirds but was recovered a week later. In 1974, he traded this electric guitar for a modified Telecaster.

The guitar Jeff traded his Esquire for was a 1959 Fender Telecaster ‘Tele-Gib’. He got it from Seymour Duncan, and it was featured on “Blow By Blow” and “Cause We’ve Ended As Lovers.” It can also be seen in the music video for “Secret Policeman’s Ball.”

He made drastic modifications to it by removing the finish to replicate the look and feel of a Blond Les Paul he saw in a catalog.

It allegedly fell off of a tall Marshall amp in the early ’70s and had to have the neck replaced. The luthier apparently made adjustments he didn’t like, so he phased this guitar out eventually.

While recording Beck, Bogert & Appice in 1973, he found a 1954 Gibson “Oxblood” Les Paul at a Memphis music store.

As the story goes, a musician paid to have modifications done like the new oxblood finish and humbucker pickups, but they didn’t like how the guitar turned out and didn’t buy it.

Luckily for the store, he loved the strange guitar and bought it immediately.

Most of the greats have played a Strat at some point in their career, and Beck was no exception (he’s played several over his career).

From 1969-1977, he played an original 1954 Fender Stratocaster which, if you know much about the history of the Stratocaster, you’ll know the ’54 model was the first issue.

Since he has an unfortunate history of his guitars getting stolen, he often keeps his favorites safely locked away in his studio.

One such one is the vintage 1960s Fender Stratocaster. This is most prominently featured on the album Wired.

In recent years, he’s played a 2016 Fender Stratocaster Custom Shop JB w/ Reverse Headstock during his tours. This has the headstock turned 180 degrees and the bottom of the fretboard is also sharp and thinner than usual around the 22nd fret.

If you’re looking to capture the sound and energy of his early career with The Yardbirds, check out the Fender Standard Stratocaster.

This is the best Fender Stratocaster for the money. If that’s too much money, consider picking up a Fender Deluxe Stratocaster. Not as fancy as the Standard, but it’s a great starter model that won’t cost the earth.

If you want a Les Paul, obviously an original would be ideal – but there are also some great Les Paul Copies available.

During his short tenure with The Yardbirds, Beck used a Vox AC30. This amp was mainly used for his Esquire.

The amp JB is best known for is the Marshall JTM45 Plexi, which he played with after leaving The Yardbirds.

An interesting side note: the word ‘Plexi’ refers to the plexiglass design on the front of these amps. The word ‘Plexi’ is now used to refer to this British ‘crunch’ sound – you can get Plexi pedals that emulate this sound which are pretty fun too.

Another such post-Yardbirds amp is the Marshall JCM2000 DSL50, which JB played with throughout the ’90s.

While touring with Stevie Ray Vaughan in 1989, he famously used a Fender Twin Reverb Reissue.

And last but not least, he’s been incorporating a Fender Vibro-King into his live sets since 2010.

A terrific albeit not very cheap option to capture the Yardbird days is the updated Vox AC30. These amps are solid and powerful, but not cheap.

Marshall still makes the JTM45 2245 30W Plexi but if you’re looking for a cheaper option, check out the Marshall DSL Series DSL100H.

If you’re looking for a solid reverb amp for not much dough, I suggest the Fender Champion 100, which is rather well priced.

But if you’re living large and are willing to spend a pretty penny, consider picking up a new Fender Vibro-King. For a princely sum, this all-tube hand-wired beast can be yours.

JB’s ability to embrace technology and the new sounds that come with it is one of the reasons he’s managed to stay a relevant and influential musician for the past 60 years.

The first pedals he’s said to have used are the Dunlop Cry Baby and the Colorsound Overdriver. But he’s used many, many others throughout his career.

Some of the many pedals he’s been known to use:

For those looking for a powerful overdrive pedal, check out the Vick Audio Overdriver.

And if you’re interested in matching the sound of Jeff’s delay-laden lines, lucky for you they’re still making the Way Huge Aqua Puss Analog Delay Pedal.

Jeff Beck might not be as famous as some of his contemporaries but listen to this incredible musician play his instrument and you’ll immediately know that the love of music alone is what drives him.

Yes, using similar tools to create music will help you play like him, but nothing can replace the decades of sacrifice, experimentation and difficult work it’s taken him to build his prowess and signature sound.