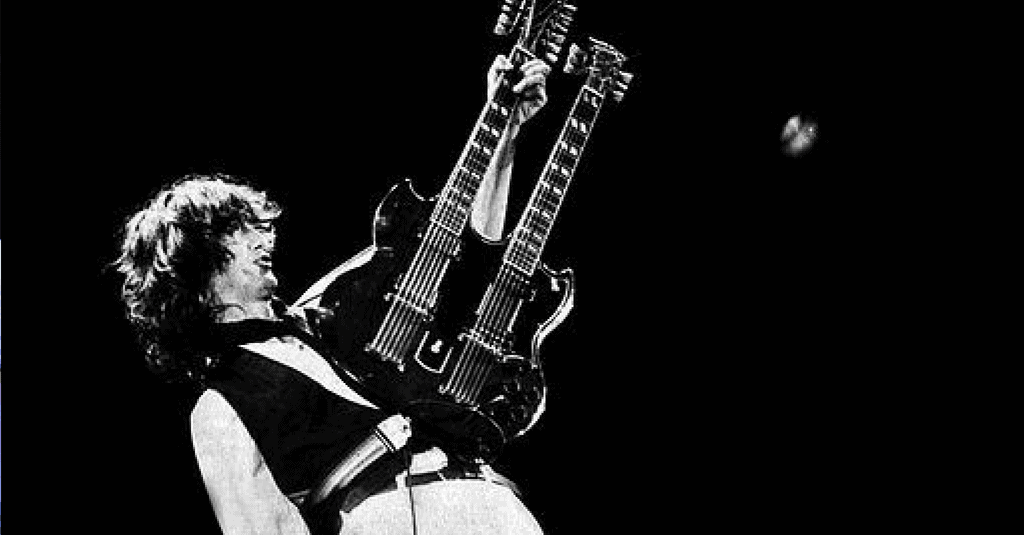 Guitarists don’t get more legendary than Jimmy Page, who is most famous for playing lead in one of the most popular British bands in rock history, Led Zeppelin.

Regarded as one of the most influential guitarists of all time, Page was inducted into the Rock and Roll Hall of Fame twice for his work with Led Zeppelin as well as The Yardbirds.

If you’re interested in learning about how he got his sound, you’ve come to the right place.

Born in 1944, he spent his early years in the west London suburb of Heston. A move in 1952 to a home with an acoustic guitar left by the previous owners proved to be something that would change the world of music forever.

“I don’t know whether it was left behind by the people before, or whether it was a friend of the family’s—nobody seemed to know why it was there,” Page later said in an interview.

“When I grew up there weren’t many other guitarists … There was one other in my school who actually showed me the first chords that I learned and I went on from there. I was bored so I taught myself from listening to records. So obviously it was a very personal thing,” Page said in an interview.

Page’s first electric was a 1950s Futurama/Grazioso. It was a used model that he purchased second-hand after realizing that his old acoustic wasn’t doing the trick anymore.

Crafted by a Czechoslovakian company, it featured three single-coil pickups and a warm sunburst finish, and it’s likely it was integral in helping Page develop his musical prowess and signature sound before becoming a professional session musician in the early ’60s.

By age 13, Page was good enough to be featured live on BBC1, as well as playing on the streets busking.

“There was a lot of busking in the early days, but as they say, I had to come to grips with it and it was a good schooling,” Page said in an interview.

In the early ’60s, he bought a 1960 Gibson Les Paul Custom. He’d later name it “Black Beauty.” Tragically, it was stolen during an American tour.

From another interview, he said: “Black Beauty, which got nicked in the States; it disappeared in an airport, somewhere between Boston and Montreal. A lot of my studio work had been done with that guitar. I didn’t want to take it out of the house. Funny that once I did take it out, it got nicked!”

Black beauty was used to record “Whole Lotta Love” and the majority of his session recordings. In a stunning turn of events, it was miraculously returned and was for a time for sale. If you’ve got 70k lying around, “Black Beauty” can be yours.

He purchased a 1961 Danelectro 3021/DC59 in the mid-’60s. He used it in his session work as well as with The Yardbirds and Led Zeppelin. Avid Zeppelin fans will recognize this as the six-string he played on “Kashmir” during live shows.

When Page replaced Eric Clapton in the Yardbirds in 1966, Jeff Beck gave him a 1959 Fender Telecaster.

Known as the “Dragon Telecaster,” he painted a swirling psychedelic dragon over the ash body after receiving it. Beck considered the gift as repayment for Page’s help throughout his early career.

Page still considers the instrument to be “magical,” and it went on to be featured during the iconic solo for “Stairway To Heaven.” Tragically, it was later ruined during a tour in America.

In 1969, Page was given a J1959 Gibson Les Paul Standard by Joe Walsh, and it quickly became his favorite

The instrument underwent a few customizations to perfectly suit his playing style and physique. The neck was shaved and sanded down slightly and the electronics underwent significant modifications over the years. He explained in an interview why he refers to it as his “Number One:”

“As soon as I played the Les Paul I fell in love. Not that the Tele isn’t user-friendly, but the Les Paul was gorgeous and easy to play. It just seemed like a good touring guitar. It’s more of a fight with the Telecaster but there are rewards. The Gibson’s got all that very stereotyped sound, maybe, I don’t know, but it’s got a really beautiful sustain. I do like sustain. It relates to bowed instruments. Sustain speaks for itself, that’s the whole thing.”

If money isn’t a concern, you can purchase a Gibson Les Paul Standard to replicate the sound. The only snag is the price tag. It’ll cost you upwards of $200k USD to own one of these bad boys! Since they were only produced from 1958-1960, they’re incredibly rare.

For his 12-string duties, he relied on a 1965 Fender Electric XII, with a headstock that strongly resembles a hockey stick. It can be heard on the songs “Living Loving Maid,” “Stairway to Heaven,” and on “The Song Remains The Same.”

If you’ve ever wondered what in the world he was playing if you happened to see him playing a double-necked electric guitar on “Stairway To Heaven” during live performances, the beast you were looking at was the 1970s Gibson EDS-1275 Doubleneck (take a look at the main image of this article).

As legend has it, he was frustrated with having to switch guitars during live performances of the song, so he had it custom made for him. One neck is reserved for the intro and solo and the other is used for verses.

To record “Babe I’m Gonna Leave You,”  “Black Mountain Side” and “Your Time is Gonna Come,” he borrowed a 1963 Gibson J-200 acoustic from his friend Jim Sullivan.

What should you buy to get the same sound?

First up is a Les Paul. Gibson are the first choice obviously, but you don’t need to pay over the odds for a Gibson Les Paul. There are plenty of cheaper Les Paul copies that will sound perfectly fine.

If you don’t want to push the boat out, go for the Gibson Les Paul Standard Heritage Cherry Sunburst. If you’re interested in being able to pull off his live work with “Stairway To Heaven,” the Epiphone Limited Edition G-1275 Double Neck Electric Guitar is a solid choice that won’t bankrupt you.

For his acoustic guitar work, a great option is the Gibson Limited Ed 2018 J15 Walnut Burst Acoustic Electric. It’s got a sitka spruce top and LR Baggs pickup. This is a solid, reasonably priced acoustic option.

A great electric option to help you replicate the sound of his early session work is the Danelectro 66T electric guitar. With a Lipstick Humbucker and Wilkinson tremolo, this electric is a great beginner-intermediate option.

Page first played on a Vox AC-30 in 1968 when Led Zeppelin formed before incorporating a Fender Super Reverb a year later. The Rickenbacker Transonic was also used on Led Zeppelin’s first tour; he started playing with the Marshall SLP-1959 Super Lead which he used until 1975. For the famous solo in “Stairway To Heaven,” he used a Supro Thunderbolt.

“I was using the Supro amp for the first album and still do. The “Stairway To Heaven” solo was done when I pulled out the Telecaster, which I hadn’t used for a long time, plugged it into the Supro, and away it went again,” he said in an interview.

Some of the amps he used are now incredibly rare and expensive because they’re not being made anymore, but models like the Vox AC-30 and Fender Super Reverb are still being produced today and you can pick them up for not very much money.

Orange MatAmps aren’t being made anymore, but something like the Orange Crush Pro will do the trick. If you want to replicate something like Jimmy’s Marshall or Supro, then the Marshall DSL100 Head and MX412A Cab 100 Watt Guitar Amp Half Stack will work quite nicely for a reasonable price.

Page’s guitar work was heavily intertwined with the burgeoning effects pedal technology of the ’60s. The first pedal he used was a Maestro FZ-1 Fuzz-Tone that he played with when he was a session guitarist.

He played with a Vox Grey Wah with The Yardbirds before switching to a Vox King Wah later with Led Zeppelin. He played with a Univox UD-50 Uni-Drive on the “Back to the Clubs” tour and played with a VOX CO2 Deluxe Echo using a tape loop effect during that time.

The Sonic Wave Theremin foot pedal was used on “Whole Lotta Love” and he played with a MXR M103 Blue Box Fuzz/Octave Pedal in the late 70’s. Since 1993, Jimmy has been playing with the Pete Cornish Effects Pedalboard. It includes pedals like the MXR Phase 90, Yamaha CH-10Mk II Chorus, Boss CE-2 Chorus, Digitech WH-1 Whammy and Jen Crybaby Wah.

If you’re looking for an inexpensive way to mirror his pedals, consider picking up a Gator Large Aluminum Pedalboard. This doesn’t have the high-quality pedals that he used, but it’s a great affordable starting point.

Another option is picking up a combo pedal like the Pro Co Rat 2 Distortion / Fuzz / Overdrive Pedal, which combines overdrive, fuzz, and distortion.

But the most important pedal you’ll need to pick up to sound is a tone bender like the Sola, which he credits for helping him form his sound.

The Morgan Amps Tone Bender MKII Professional Fuzz Pedal is another great option you can pick up for not too much money.

And finally, the Electro Faustus Photo Theremin EF102 is a solid choice for anyone interested in trying to mirror Jimmy’s work.

Jimmy Page’s gear and equipment was a big part of helping the iconic guitarist for his sound, but his willingness to experiment was why we think of him as being one of the greatest guitarists of all time.

If you really want to sound like him, incorporating an adventurous spirit into your playing is one of the best ways to do it.