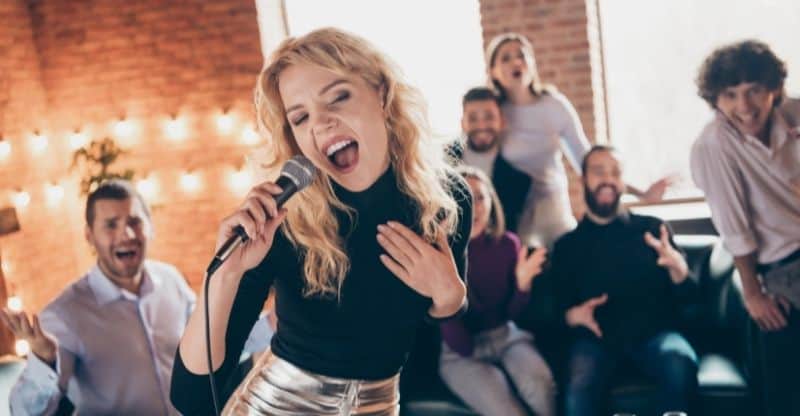 Got a karaoke night coming up? Not sure what to sing? Then, here’s our list of the best karaoke songs for women to sing.

Here you’ll find songs that have been popular songs for women and girls since the dawn of karaoke (which wasn’t very long ago, to be honest.)

Of course, females can sing whatever songs they like. But these songs are particularly good as they sit well within most women’s vocal range.

Plus, many are ‘female empowerment songs’ or ‘girl anthems,’ making them lots of fun to sing.

Have a great night!

Dolly Parton’s signature song about work is a real crowd-pleaser, plus it’s a pretty easy song to sing. It’s perfect after a grueling day at work when you want to let off some steam!

This rain song by the unforgettable Weather Girls was a smash hit in the ’80s. There are so many men around; it’s literally raining them. I hope the umbrella holds up :-).

Here’s a karaoke song that gets more rotation than possibly any other. It helps if you’re wearing some ’80s style shoulder pads for this :->

Katy Perry’s ‘Eye of the Tiger’ inspired track was an instant sensation when she released it, and it’s a solid karaoke choice too.

Here’s one directed at all those self-centered guys out there. It’s an excellent choice if you’ve just split up from a narcissist who’s been using you.

‘I Will Survive’ – Gloria Gaynor

Until fairly recently, this was the female empowerment song. Now there are tons more (many are on this list) besides this Gloria Gaynor hit, but there’s still something timeless about this song about not giving up. Wear some 70s attire to complete the look :p

Here’s a song that many girls can relate to. Your guy is great when it’s just you and him, but he turns into a total loser when he’s with his friends. Dealing with fake people? It’s not complicated if you stop spending time with them :-D.

And what would a list of karaoke songs for girls be without one from Abba? Not a very good one, that’s what. This one was already popular before the hit musical came along, but now it’s taken on epic proportions. Knee-high boots will complete the look, or a bearded guy, or both.

‘What’s Love Got To Do With It’ – Tina Turner

This ’80s classic is another massively popular choice for women to sing. If you know anything about Tina Turner’s life story (see the musical, if you don’t), you’ll know she went through many hardships and pain. She came through it all and produced songs like this.

Here’s another classic that’s a perfect karaoke choice to celebrate girl power. It’s about a strong woman who can do anything she puts her mind to. Damn right.

Here’s one of the most famous songs about girls by Cyndi Lauper. It’s a brilliant group karaoke song, as everyone knows it. Its message about wanting fun “when the working day is done” is perfect for a big night out when you want to let your hair down.

‘Shallow (A Star Is Born)’ – Lady Gaga and Bradley Cooper

Do you know what is really fun? Singing a duet. Here’s one of the best duet karaoke songs ever by Lady Gaga and Bradley Cooper from the movie A Star is Born. It’s a great song; give it your best shot.

This rip-roaring karaoke classic is for you rock chicks. Rock music is dominated so much by guys in overly tight trousers that it’s refreshing to see a female rocking out too. Joan Jett knocked this one out of the park. Maybe you can too?

Ever felt like your guy isn’t telling you the whole truth? In this song about lying, Beyoncé’s guy is acting strange when she calls him. To prove he’s not without another girl, she tells him to “say my name.” Clever!

Another one of the most popular karaoke songs from Sheryl Crow here. It’s one everyone will know, and with any luck, love.

If you want to go a little more vintage, some Aretha never disappoints. Here, she realizes she’s one of many fools that her two-timing guy is dating.

‘Come On Over Baby (All I Want Is You)’ – Christina Aguilera

Any Christina Aguilera fans out there? Then try this party song about getting to know a guy a little better. It will make your karaoke experience feel amazing.

‘I Wanna Dance with Somebody (Who Loves Me)’ – Whitney Houston

One of the most sung karaoke songs ever here from Whitney Houston. In the song, she’s tired of dancing with one-night stands and wants a longer-term commitment (someone who loves her).

‘Oops! I Did It Again’ – Britney Spears

Britney was only 19 when she released this, but her first single (“…Baby One More Time”) was released three years earlier when she was just 16! Here, she’s broken someone else’s heart again and doesn’t seem at all bothered (hence the “oops”).

Here’s a classic friendship song by the British girl-power band Spice Girls. If there are five of you and you all know the song, agree who’s who, and before you know it, you’ll be hitting the high notes like you’re back in the ’90s 🙂

‘Shake It Off’ – Taylor Swift

‘Shake It Off’ is one of a handful of easy karaoke songs for women. What makes it so simple is that there’s tons of repetition in it. Not everyone will like it, but “haters gonna hate.”

Just shake it off!