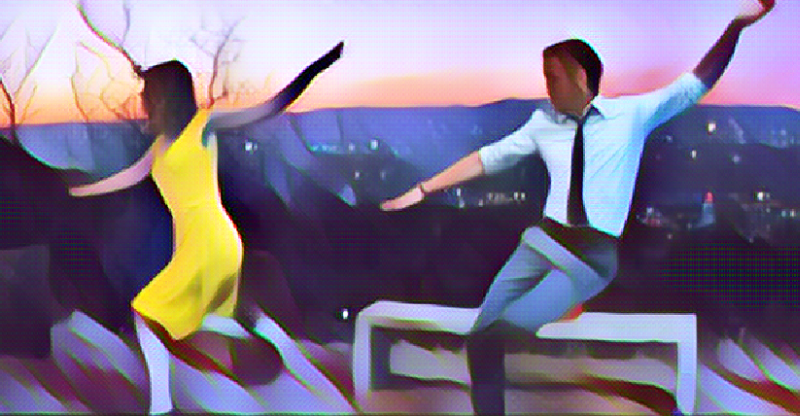 La La Land is a love story at its core, centering around Mia and Sebastian, played by Emma Stone and Ryan Gosling. John Legend and Rosemarie DeWitt are among the many great supporting roles in this film.

Mia is an aspiring actress, and Sebastian is a determined musician. The two embark on a journey as dreamers in L.A., but success leads them to a crossroads. Do they follow their own personal dreams or the new dream they’ve found together?

Another Day of Sun

‘Another Day of Sun’ captures that magical dream of moving to L.A. to chase fame. This song opens La La Land, and the one-take scene is full of colorful dancing on a backed-up overpass. Lyrics like “without a nickel to my name, hopped a bus, here I came” perfectly describes the mindset of our two main characters. They are both passionate and struggling, yet they know what they are meant to be and will do anything to get there.

Related: Rise and shine, time to listen to the best sun songs.

Someone in the Crowd

In order to convince Mia to go out with them, her roommates sing ‘Someone in the Crowd’ about the possibility of meeting a love interest (or a career opportunity) at a party in L.A. Though most of the lyrics are playful, like “tonight we’re on a mission. Tonight’s the casting call,” a slowed-down section sung by Mia shows that she really does want to find this person/opportunity.

Related: Look no further. We found the best songs about searching.

This sarcastic duet features a beautiful sky view and a tap dance number. Despite the interest they have in each other, Mia and Sebastian sing “there’s not a spark in sight, what a waste of a lovely night.” They wander together looking for Mia’s car, and lots of well-timed, flirty banter is exchanged. It’s a sweet scene, a lovely song, and a charming beginning to the relationship.

‘Mia and Sebastian’s Theme’ shows up several times throughout the movie, mostly in the scenes where a significant milestone of the relationship is occurring. The first time we hear it, we see Sebastian playing it at his restaurant gig. Though playing this song ends up getting him fired (since he was instructed only to play holiday tunes), it does grab the attention of Mia, who is stunned by its beauty. This song is a staple on the La La Land original motion picture soundtrack.

The first obstacle in Mia and Sebastian’s relationship has come up—Mia doesn’t like jazz! Sebastian immediately seeks to fix this and takes her to a jazz bar where a group plays “Herman’s Habit.” Sebastian’s passion for the genre is palpable and intense, giving us some insight into his goal as a musician—to open his own jazz bar.

‘City of Stars’ is first sung by Sebastian after he and Mia part ways from the jazz bar. He wanders along a pier, singing to himself and reflecting on his newfound feelings. Later in the movie, it’s sung again as a duet. The hook says, “city of stars, are you shining just for me?” The notoriety Sebastian and later Mia gain is a big factor in the relationship’s downfall. This song takes us back to when they shined only for each other.

Related: Find this song on our playlist of star songs.

Mia and Sebastian have a dreamy, otherwordly date at the planetarium as this orchestral song plays. Fluttering flute and big strings put a new spin on ‘Mia & Sebastian’s Theme.” This song takes the pair out of reality and into the sky, and we see their silhouettes dancing through a starry night. It’s a lovely, cinematic song that bursts with Mia and Sebastian’s infatuation for each other.

Related: Head over to our list of the best songs about night.

A montage of Mia and Sebastian is compiled to ‘Summer Montage/Madeline.’ They explore L.A. together, and we get to see a lot of simple, loving moments between them. Towards the end of the scene, we see Sebastian has joined the jazz group from earlier, and there’s another incredible one-take scene that swivels back and forth between Sebastion playing piano and Mia dancing (quite a difference from the piano playing/dancing exchange in the ‘I Ran’ scene).

Mia attends Sebastian’s new band’s concert, and this song is the show opener. It’s an uptempo pop tune with lots of drums and electronic sounds- but it’s missing that element of authentic jazz that Sebastian seemed so passionate about earlier in the movie. Though ‘Start a Fire’ is a great song, it creates some sparks of tension because Mia thinks Sebastian is sacrificing his authenticity for music he doesn’t actually want to play.

Audition (The Fools Who Dream)

At a life-changing audition for a movie, Mia is told by the casting directors to “tell [them] a story.” This song is her story. Based on her aunt that lived in Paris, the song sings about her recklessly brave personality. The main message encourages people to dream about their future just as recklessly- “here’s to the fools who dream, crazy as they may seem/here’s to the hearts that break, here’s to the mess we make.” Mia’s performance starts soft and intimate, growing into emotional belting as the camera circles around her.

Related: Build up the courage with these brave songs.

After a time jump of several years, we see Mia with a new family, confirming our fears that she might not end up with Sebastian. On a date with her husband, though, she finds herself at Sebastian’s very own jazz bar. Sebastian sees her in the crowd and proceeds to play ‘Epilogue,’ a medley of the other songs in the movie, heavily centered around ‘Mia & Sebastian’s Theme.’ It’s an incredibly emotional scene that takes us back through all that they were and all that they could’ve been if only something had been different.

This version of ‘City of Stars’ plays during the end credits of the movie. The tune is hummed by Mia and backed by an acoustic guitar being plucked. It’s peaceful and quiet, the perfect way to leave the audience room to reflect on the film they just saw. In this case, the room to recover from the heartbreak La La Land left us with.