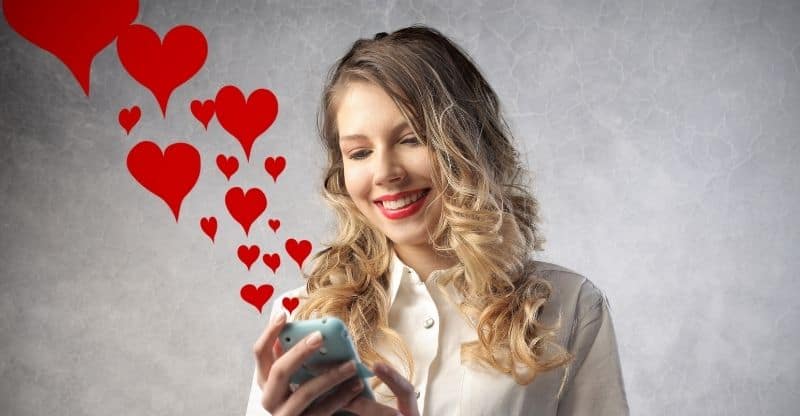 In the Snow Patrol song ‘Chasing Cars’, singer Gary Lightbody sings, “I don’t quite know how to say how I feel.”

That’s an issue for many of us. We want to express something, but we’re rubbish with words.

That’s where music comes to the rescue.

Because here’s the thing: songs can help you express how you feel way better than trying to find you’re own way of saying it.

To give you some ideas, we’ve put together this list of love songs for him that should help you communicate how you feel. It should also remind him what a wonderful human being you are too 🙂

Quite simply one of the best love songs for him of the past few years. The songwriter, Ellie Roswell, told the NME, “I wanted the happy Hollywood ending.” It looks like she achieved it.

There’s not an inch of cynicism either. Instead, it’s just an upbeat, youthful love song about the thrill of a new love interest. The video is excellent, too, with tons of footage of the London Underground.

For more Wolf Alice, check out their wonderful song ‘Bros,’ which we feature on our songs about growing up playlist.

“Wait, they don’t love you like I love you.”

‘MAPS’ is short for ‘My Angus Please Stay’ (her boyfriend at the time was a guy called Angus Andrew).

“It’s a love song, rooted in the emotion of missing someone,” she said. It’s also become a modern-day karaoke favorite.

A lot of guys like Foo Fighters. Girls do too. But guys, for some reason, especially do.

Is it Dave Grohl’s charismatic, carefree attitude? His singing voice? The insanely good drumming courtesy of Taylor Hawkins? The uplifting sentiment of many of their songs (listen to ‘These Days,’ for example)? Who knows, but they rock.

This has got to be one of the best songs to send to your boyfriend. I’d put money on it.

“This is the first day of my life / I’m glad I didn’t die before I met you / But now I don’t care, I could go anywhere with you / And I’d probably be happy.”

This is one of the best love songs of the past 20 years. Here, the narrator realizes he’s just met someone who makes him feel like a new person.

There is a brilliant bit of writing from Jarvis Cocker about how important things in your life happen randomly. Then suddenly, everything changes.

Here, Justin Timberlake tells his lover that she’s such an essential part of him that all he sees when he looks in the mirror is her, “it’s like you’re my mirror / My mirror staring back at me.”

“Why are you so far away, she said / Why won’t you ever know that I’m in love with you.”

A song inspired by a trip to the seaside frontman Robert Smith took with his then-girlfriend (who he later married).

‘I Got You’ – Michael Franti and Spearhead

“Each time I’ve fallen down inside that hole / You came and showed me there’s a way to go.”

Michael Franti has written a ton of love songs. Here, he tells his lover that anything is possible, cos “I got you.” Such a romantic song.

“Baby, set my soul on fire / I’ve got two little arms to hold on tight, and I want to take you higher.”

Amazing, isn’t it. It might be the best song of the lot. If your guy has any taste in music, he should love it too. The thing is, nobody knows this song. You’ve probably not heard it, and he won’t have either, which makes it even better.

‘Come Away With Me’ – Norah Jones

“Come away with me and we’ll kiss / On a mountaintop.”

One of the most romantic songs ever; it should melt anyone’s heart. It did mine. When I lived in Japan, I listened to it, and it made me fall in love again (a couple of years later, I was doing a slow dance to it at our wedding :-).

Everything about the song is perfection; it’s one of the best songs about boyfriends ever. Nora Jones is Ravi Shankar’s daughter, by the way, for any fans of sitar music.

The duet is one of the most charming love songs you’ll ever hear. If you dedicate this to your boyfriend, he should be smitten. As it’s a duet, it’s an excellent song for couples to sing at a Karaoke bash.

“And the guns, shot above our heads / And we kissed, as though nothing could fall.”

One of the best songs of all time. Set in the time of the Berlin Wall, it’s a song about freedom and making a stand for yourself. Bowie tells his lover they can be heroes just for one day; we can be “us” just for one day.

“Do you know what I really need?”

Kate Bush’s masterpiece is about being afraid to fall in love. She compares falling in love to being chased by a pack of hounds.

“And if you laid all night in the rain for me / I couldn’t love you more.”

Stick with it; it takes a few seconds to get started. Then he sings, and wow, a voice like an angel. It’s a song about having endless love for someone.

If you like Martyn’s stuff, you should definitely check out his fantastic “May You Never.”

‘There Is A Light That Never Goes Out’ – The Smiths

Like what happens in the James Dean film Rebel Without a Cause, Morrissey leaves his torturous home (“it’s their home, not my home”) and becomes the passenger in a car to someone he has an undying love for.

‘Fell In Love With A Girl’ – The White Stripes

“She turns and says “are you alright? / I said I must be fine because my heart’s still beating.”

Definitely one of the best rock love songs. And the wordless sing-along (“ah-ah-ah-ah”) is very cool. The video is ace too – made entirely using Lego, it’s one of the most innovative ever.

Any romantic playlist these days has to include ‘Ho Hey’ by The Lumineers. You’ll recognize this toe-tapper when you hear it. Its folky ‘sing-along style’ is very in keeping with Mumford and Sons stuff like ‘Little Lion Man’ (a brilliant song about guilt, if you were curious).

“I’m content just with the riches that you bring.”

The Jam’s main ingredient, Paul Weller, ditched his post-punk roots and turned to soul in the mid-’80s (he’d reached the zenith and made a call to change directions, much to the dismay of his legion of fans).

The result? A handful of absolute gems, like this one. The words need no explaining, but I’ll do so anyway (maybe you had a late night putting this article together, like me :-))

“When you’re so much in love / You don’t know just how much you can stand.”

“If I lay here / If I just lay here / Would you lie with me and just forget the world?”

As we mention in the intro, songs like this really capture how we feel. Often far better than trying to put into words how we feel. Here, he tells his girl they don’t need anything or anyone, just each other.

Nobody can knock The Kings of Leon. Some of their stuff may have been overplayed a bit, but hey, that’s not their fault. They make some of the rawest, most energetic rock music of recent years. When the guitars kick in here, it literally shakes you out of your fug.

“Sleight of hand and twist of fate.”

One of the best romantic songs for your boyfriend has to be ‘With Or Without You.’ Of course, the lyrics have a certain irony as he can’t live ‘with’ her either. Anyway, he’ll gloss over that and love this one.

Finally, for something a little off the wall, how about this French tune – it’s perfect for a romantic evening. It’s one of those cute love songs for him that he’ll either love or hate.

Either, it’ll be fun to see his reaction!

Still can’t find what you’re looking for? Ok then, here are some more ideas…