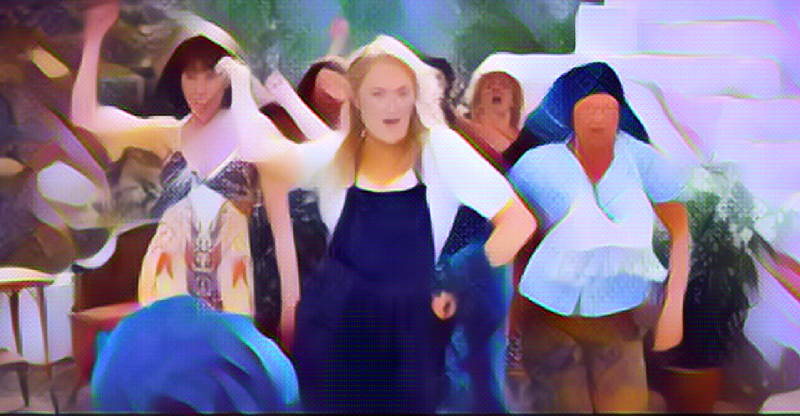 Mamma Mia! is a famous stage and film musical that features many loved songs from ABBA.

The story follows free-spirited Donna (played by Meryl Streep) and her strong-willed daughter Sophie (Amanda Seyfried)—a bride-to-be—who invites three men her mother knew romantically to attend her wedding to find out if one of them is her father.

Celebrate this sunny and musical story by reading about the songs from the Mamma Mia soundtrack!

Sophie and her friends sing this track toward the beginning of the story as she tells them about her plans to invite her mother’s ex-lovers and reads her mother’s diary of romantic memories out loud to the other young women. The song itself is about a sweet and thrilling lover that the protagonist set out to learn more about.

Donna sings this song with Rosie (Julie Walters) and Tanya while worrying about her money and career woes and enters into an imagination sequence about having money. ABBA did not have money issues at the time of this song’s writing, as the band was very successful then; however, they sang the song from the perspective of a poor person dreaming of having money. The protagonist knows a rich man won’t come her way, so she must try to find fortune herself.

Related: Listen to our free list of songs about money.

Mamma Mia!’s title track is about wanting to be with someone you’ve already been with and found to be a bad match. Donna sings it when she realizes she has to face her three former lovers and appears to be experiencing a mid-life crisis of sorts as she reminisces on her younger years with each man and remembers them in younger form.

Related: Whether you’re singing in your car or at karaoke night, you’ll love these easy karaoke songs.

The song is one of ABBA’s most popular and is a dance-fueled track about a young girl who mesmerizes everyone on the dance floor. Rosie and Tanya start singing this song with Donna to help her rekindle her youth and free-spirited ways when she has faced the fact that her past flames have returned. Donna eventually gets into the fun spirit and leaves the house, where the villagers join the three women in song.

Related: Dance the night away with this list of dancing songs.

This is one of Mamma Mia!’s tracks that were modified somewhat to fit the context of its story. The main singers differ between the musical and the movie, but Harry is one of the lead characters in both versions. The song is another of the story’s pieces that allows the male characters to reminisce on their past memories with Donna, with lyrics that tell the story of a summer romance from the past.

Related: Soak up the sun with these songs about summer.

Lay All Your Love on Me

Sky (played by Dominic Cooper) and Sophie sing this song as the former prepares to attend his stag party. The two sing of their commitment to each other, with the song’s lyrics finding a narrator who asks her lover to save all his love for her. Sophie tells Sky about her plans to find her father while Sky confides that Sophie has changed his life. The stag party attendees show up and join in; the scene then cuts to Sophie’s hen party, where the attendees finish the song.

Related: Waiting for someone? Pass the time with these songs about patience.

This track tells the story of a singing star getting tired of touring life. However, she has renewed enthusiasm when she realizes that her favorite person will be in the crowd at tonight’s performance. Donna, Rosie, and Tanya sing it like their old band, Donna and the Dynamos, for Sophie’s hen party as the men arrive secretly. Donna sings the song directly to Sophie to demonstrate her motherly love.

This song is performed by the attendees of Sophie’s hen party as they tease Bill and Harry. It also plays instrumentally during an early scene in the film release that briefly introduces the audience to Harry, Sam, and Bill. The lyrics are about a woman who wants to find a man for a passionate fling that will fill the holes in her heart. Bill realizes he may be Sophie’s father near the song’s end.

Related: Sneak over to our playlist of fooling around songs.

The Name of the Game

Sophie and Bill sing this track when Bill realizes that he may be Sophie’s father. The song is about two people in a relationship being frank with each other about their feelings but is repurposed as a family song for the musical. It appears in the stage musical and is part of the movie soundtrack, but is only present in a deleted scene in the 2008 film.

Related: To tell you the truth, we love these songs about honesty.

This ensemble piece is performed by all of the attendees of Sophie’s hen party as everyone dances. The song is about taking chances on passion during a night out and fits the party scene well. Sam and Harry both realize that they may be fathers during this scene. Realizing that she still doesn’t know who her dad is, Sophie is overcome by stress and passes out while everyone dances.

Related: Don’t miss your chance to listen to these songs about opportunity.

Donna and Sam perform this track while arguing about Sophie and their past relationship. It highlighted a scene of romantic and emotional tension, with themes of a broken relationship and lost love that the protagonist desperately wants to rekindle. Lyrics such as “The love you gave me/Nothing else can save me” highlight this desperation.

Related: Rekindle the feeling with these songs about lost love.

Does Your Mother Know

Tanya and Pepper perform this song, flirting on the beach as Tanya also points out that she may be too old for him. The two dance, and Pepper’s friends eventually join in. The original ABBA song is performed from a male perspective and is not sung as a duet.

Related: Sail away to our list of songs about beaches.

Slipping Through My Fingers

Donna sings this song as she helps Sophie get ready for her wedding and reflects on her childhood. The song is about a parent watching their child grow up too fast and unable to do anything about it. Sophie joins in toward the end as the two continue to bond.

The Winner Takes It All

During a pivotal moment, Donna performs this solo ballad as she argues with Sam for a second time about Sophie, Donna, and Sam’s past romance. The song is about giving in to your heartbreak and realizing that the other person is leaving the relationship relatively unscathed.

Related: Grab a tissue and listen to the best songs about heartbreak.

When All is Said and Done

Sam begins this song after Sky’s and Sophie’s wedding is canceled, and he and Donna have been married instead. Donna joins in, followed by the rest of the wedding guests seated at the dinner reception table. The song is about finally settling down with the love of your life and taking things slow from now on.

Related: You and your lover will love the best soulmate songs.

Take a Chance on Me

Rosie sings this song to Bill at Sam’s and Donna’s dinner reception. She hopes he will decide to settle down one day and will come to her when he does, which is what the song’s lyrics are all about. Bill is reluctant at the beginning but joins in singing midway through the song, signaling his desire to pursue a relationship. Harry joins in as well after connecting with one of Sky’s groomsmen.

I Have a Dream

Sophie sings this track in the dark at the beginning of the Mamma Mia! film when she mails wedding invitations to her three potential fathers. In both versions, she performs it at the end when she says goodbye to her mother and the three men and sets off on a boat with Sky to find adventure. The song is about having a wonderful dream that helps you get through life and see the best in people and the world around you.

Related: Are you a dreamer? Listen to the best dreaming songs.

Thank You for the Music

Amanda Seyfried sings this during the film’s end credits as Sophie; it does not appear in the stage musical. The song is about a narrator who loves singing and dancing and thanks someone for bringing music into the world and her life. It fits as an end to a story that relies heavily on music and the joy that it evokes.

Related: What else are you thankful for? Here’s our playlist of gratitude songs.