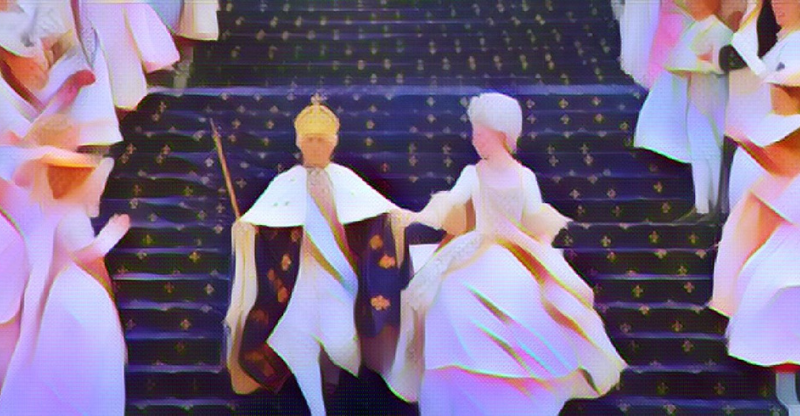 The young socialite’s most famous quote as France descended into starvation was “Let them eat cake!” but the royal queen was much more than a catchy one-liner.

Coppola uses an array of new wave music and a small selection of classical songs on the Marie Antoinette soundtrack to assist the telling of the queen’s life of luxury and rebellion.

Touted as a post-punk song icon, ‘Hong Kong Garden’ is included in a scene featuring a glamorous masked party. The 1978 tune by Siouxsie and the Banshees was their first single release and was well-received by critics. It was popular on the UK charts, and publications like Q Magazine have even voted it one of the best guitar tracks of all time.

Related: This song also features on our playlist of songs about a place.

American rapper Bow Wow Wow has several song placements featured in the film, which follows the queen’s rise and fall during the French Revolution. ‘Aphrodisiac’ plays during the first meeting between Marie Antoinette and Count Axel von Fersen. Though never formally confirmed, history has long suggested the two socialites had a messy love affair.

What Ever Happened – The Strokes

The Strokes’ ‘What Ever Happened’ appears in a scene when she seeks the privacy of her own room after her first meeting with Count Fersen, which leaves her giddy with young love. Marie Antoinette was only 14 when she was promoted to the queen after the death of Louis the XV. The Strokes’ 2003 single is a message about freeing oneself from what is holding you back, a fitting theme for the scene.

Related: Would you have been a good teen ruler? Feel stress-free with the best teenager songs.

Pulling Our Weight – The Radio Dept.

“Forgot about the war. We barely touched. As if being watched.” The Radio Dept.’s ‘Pulling Our Weight’ gained a whole new set of fans after being featured in the film. Fans of the movie also became fans of the song due to its poetic lyrics and soulful message. Multiple interpretations include the strife couples go through who are distanced by war and looking for closure from a relationship that’s ended.

Related: Hear similar songs on our list of songs about war.

Initially written by English rock band Joy Division in 1976, they regrouped after band member Ian Curtis passed away and formed New Order. In 1981, they re-released ‘Ceremony’ as their debut single. The “mid-tempo rock song” can be heard in the film during a mashup of scenes featuring the queen’s lavish birthday celebrations.

Natural’s Not in It – Gang of Four

The film features several notable bands from England’s post-punk wave of the ’70s. Gang of Four is on that list, and their song ‘Natural’s Not in It’ is heard during a scene involving newly appointed queen Marie Antoinette adjusting to a life of royalty at the tender age of 14. The song’s lyrics feature an “anti-love” message at heart and are critical of commercialism and consumerism.

Though the film is set in 18th-century France, director Sophia Coppola chose modern, sometimes over-the-top musical choices to support the extravagance of high society at the time. Rapper Bow Wow Wow has a few tunes featured in the film, one of them being his wildly popular ‘I Want Candy’ cover. The song plays during a series of scenes highlighting the expensive shopping habits of French royalty.

Related: Satisfy your sweet tooth with the best sugar songs.

Kings of the Wild Frontier – Adam and the Ants

Adam and the Ants’ release of ‘Kings of the Wild Frontier’ introduced a whole new type of music in the early ’80s geared towards young people who felt out of place in society. It featured African-inspired percussion and frontman Adam Ant’s warrior-like painted face to support the message. The song is featured in a scene as she gets to know her love interest Count Fersen while entertaining him.

Often referred to as “Concerto Alla Rustica,” Vivaldi’s ‘Concerto in G’ makes an appearance in the film as a string of scenes highlights the queen’s intricate daily dressing process, which she finds highly ridiculous. Roger Neill served as a historical music consultant for the film, and his recording of ‘Concerto in G’ is the one used in the film.

The Melody of a Fallen Tree – Windsor for the Derby

“I am the melody of the fallen tree. What comes between you and me.” Used as an early transition between scenes, the indie tune talks of a broken, strained relationship. The message of the lyrics pairs well with the French queen’s struggles portrayed throughout the movie, from becoming one of the youngest queens in history to falling for a man she wasn’t married to.

Related: Head over to our playlist of tree songs.

The soundtrack features an array of “New Wave” artists. Swedish band The Radio Dept., which gained significant popularity in the ’90s, had a few song placements on the soundtrack. Their indie-pop tune ‘I Don’t Like It Like This’ plays during the film when the king introduces his son (and future king) to Marie Antoinette for the first time.

The opening notes to The Cure’s ‘Plainsong’ plays during Marie Antoinette as young Louis is crowned king, and he silently wonders if he’s old enough to take on the challenge with his young bride Marie Antoinette. The tune feels like an epic and is an introduction to the band’s album Disintegration. It’s a synth-heavy track featuring chimes, and its title ‘Plainsong’ stands as another word for “prayer,” which gives it a philosophical or religious element.

Related: If you’re feeling insecure, here’s our list of songs about not feeling good enough.

Director Sophia Coppola brought music supervisor veteran Brian Reitzell on board while filming Marie Antoinette. In charge of the overall direction of the soundtrack for the project, Reitzell built on the lavish lifestyle French royalty was accustomed to in the 18th century by pairing scenes with “new wave” post-punk and fresh takes on classical pieces. For his own original work, though, he used simple soundscape to convey what it was like living among the elites in Versailles with his “Intro. Versailles.”

The beginning of Marie Antoinette’s story finds her arriving in Versailles for the first time so she can be introduced to a future king. As she journeys to the city, Aphex Twin’s haunting, piano-driven ‘Jynweythek Ylow’ can be heard. This alternative indie tune can also be found on the musician’s 2001 album, Durkqs.

Coppola brought on several musical veterans while filming to ensure the soundtrack was just what she was looking for. Acclaimed composer-pianist Dustin O’ Halloran was hired to write original classical pieces for the film. Thus, his baroque-inspired ‘Opus 17’ was born. He was able to write the tune after Coppola gave him a lookbook from the set full of images and ideas to serve as his muse.

This dreamy instrumental is a short-lived piece used as transitional music in the film, but French duo Air has had other more prominent placements in projects like The Virgin Suicides. The duo hailing from the city the film takes place in, Versailles, have been performing together since 1995, when they met while attending school.

Keen on Boys – The Radio Dept.

“There’s a sun in his eyes. It won’t go away.” The Radio Dept. scored a few different song placements for the period piece Marie Antoinette set in 18th century France. Despite the historical setting, the crew paired modern tunes to help exemplify the complicated affairs going on behind closed doors. Fan-favorite ‘Keen on Boys’ can be heard in the movie, and the lyrics deal with a troubled life and longing for something more.

Composer and pianist Dustin O’ Halloran was brought on board during filming for his original piano work. He penned several original works for the movie featuring a lone, intimate piano melody. ‘Opus 23’ captures Marie Antoinette’s innocence and the loneliness she felt as she transitioned into French royalty during a tumultuous time in history.

Related: You’re not alone with this list of songs about being lonely.

Initially composed by Couperin, the French baroque piece ‘Les Barricades Mysterious’ played during the film as a young man plays an electric-powered instrument known as a “clavecin” to empress a lady. The uplifting, romantic tune has inspired many artists across many different genres over the years.

“Romance is a game for fools.” This Kevin Shields remix is just one of his placements for the film. Partnering with rapper Bow Wow Wow, their other songs, ‘I Want Candy,’ and ‘Aphrodisiac’ made it on the soundtrack as well. ‘Fools Rush In’ plays as high society heiress Marie Antoinette makes her way back from a lavish party in Paris.

Aphex Twin’s popular electronic piece ‘Avril 14th’ appears in the 2006 film Marie Antoinette as she travels back to Versailles after a day out traveling. Known for his dynamic music, the minimalist haunting piano sounds in ‘Avil 14’ have made the song a fan favorite. So much so that Aphex Twin’s following even made April 14th an unofficial holiday for celebrating the artist’s music.

Italian composer Domenico Scarlatti penned his sonata ‘K. 213’ during the baroque period, making it an ideal fit for the Marie Antoinette soundtrack. He is mainly known for his work on an instrument known as the “harpsichord,” which belongs to the keyboard family. During his childhood, he studied under his father, famous fellow composer Alessandro Scarlatti.

A lone electric keyboard set against a gentle soundscape completes this work by Squarepusher. Though Squarepusher is known for his keen ear for combining several different genres to create an original sound, he keeps it simple for ‘Tommib Help Buss’, which can also be found on his album Ultravisitor.

Considered to be some of the best music penned during the 18th century “baroque period,” french composer and music theorist Jean-Philippe Rameau’s ‘Scène III – Télaire’ can be found in Sophia Coppola’s depiction of Marie Antoinette’s notorious short life. Not only was Rameau considered to be one of the most influential composers of the opera during his time, but his work on the “harpsichord” instrument is still studied today.

Composer Dustin O’ Halloran explores complex emotions of romance and longing in his instrumental track ‘Opus 36’ included in the Marie Antoinette soundtrack. The pianist has three different solo piano pieces featured in the movie, all written after studying the sets, costumes, and overall mood of the film at length.

All Cats Are Grey – The Cure

This Cure classic plays at the end credits for the movie. The song’s title comes from an ancient saying that looks don’t really tell you anything about the person when it comes to physical appearance. Bandmate Lol Tolhurst got the inspiration for the tune from his mother, who often said “all cats are grey”.