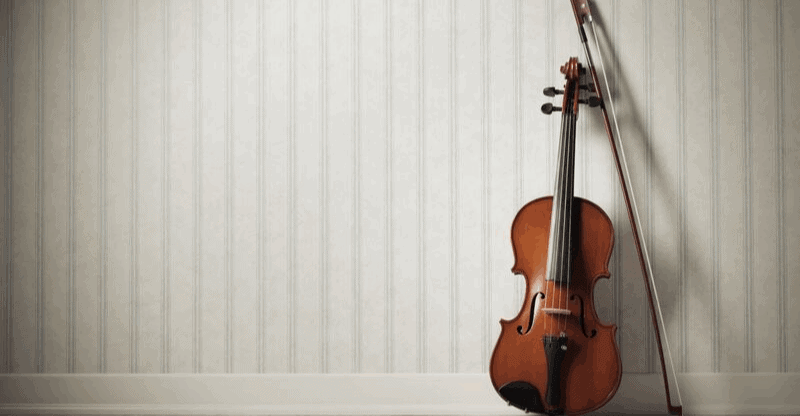 If you’re a beginner, knowing the different parts of a violin is a must for a couple of reasons.

First, when you take it into a specialist for a setup (it will happen), you’ll know how to talk about your instrument intelligently. Secondly, you should just know this stuff if you’re taking your instrument seriously. Right?

In this article, we’re going to look at all the main terminology. Here’s a brief overview of the bits and pieces we discuss:

Parts of the Violin

The nut is found at the farthest point away from the musician, between the pegbox and the fingerboard. Its main function is to allow the strings to flow evenly across the neck to the pegbox and is usually crafted out of tough wood, with high-end luthiers often using ebony.

A well-designed nut can heighten the playability of the instrument, as the material used affects its durability whilst lifting the strings away from the fingerboard. Built into the nut are four grooves, which should be engraved in a way that holds the strings in place securely, without letting them slip.

If you restring your violin, always check that the strings are set into the nut’s grooves properly, otherwise you’re likely to experience some annoying slipping or tuning issues whilst you play.

In total, a violin has four strings tuned GDAE in ascending order, however, the material manufacturers use can vary greatly. When it comes to choosing a set, there’s no completely correct option, however, a different string material will bring a new tonal quality to your instrument. For example, synthetic core strings are the most common variety, seeing as they are extra durable, but sound similar to traditional gut strings, which are considered to provide the best tone.

Nowadays, gut strings are made from either cat or sheep intestines and are wound in silver to give them a wider diameter. The tone these strings produce is full and warm, however, they can be harder to keep in tune and react badly to extreme environmental conditions.

Non-classical violinists tend to choose steel core strings for their extra stability and clear, bright tone. Sometimes these tend to sound a little thin however, so are a better option for beginners to practice with.

The fingerboard is the part of the violin that the strings press against when you hold them down and is usually glued onto the neck. In terms of material, complete beginners should avoid anything cheap with a painted-on fingerboard.

The reason for this, is that this area needs to be able to cope with the constant friction of the strings, so should be built to last. Most experienced players, therefore, go for models with more durable maple or ebony fingerboards.

Ebony is usually the preferred choice, seeing as it is a very smooth type of wood, so it allows for seamless movement across the fingerboard between melodies. In terms of tone, it helps the instrument produce clear, bright notes, with a good amount of sustain, so it will likely lead to a nicer overall sound than a painted-on fingerboard too.

When it comes to amplifying the instrument’s sound, the body of a violin should be crafted from wood with even density. For instance, maple works well in the back and ribs, whilst spruce is the go-to choice when it comes to the front plate.

The back and front can either be made from one whole piece or two separate pieces of wood glued together, however, single panels are preferred, due to their ability to increase the instrument’s resonance.

If you look closely at the front panel, you’ll find two F-holes carved into the wood. These help the body to absorb the bridge’s vibration and to project the sound out of the instrument.

The ribs, attach the back and front panels together and the joints are secured with an ebony or pearl purfling inlay, for extra strength against wear and tear.

The soundpost is a narrow, wooden cylinder positioned within the body of the violin. It is secured without glue, in such a way that the friction from the front and back panels keeps it in place.

Its purpose is to support the instrument’s body near the treble foot of the bridge, by transferring some of the pressure from the strings into the backplate.

This is important because the f-holes of the violin make the wood slightly weaker near the bridge. Therefore, if there were no support inside the body, the front would gradually become damaged whilst trying to cope with the extra physical stress in this area.

Interestingly, moving the soundpost towards the fingerboard can increase the instrument’s brightness and volume, whereas moving it towards the tailpiece creates a fuller, yet quieter tone.

The F-holes were given such a specific name due to their resemblance of the cursive letter ‘f’ and are cut into the front panel of the violin’s body. In acoustic models, these two holes help the amplified vibration from the strings project outward towards the audience.

Interestingly, F-holes date back to the Renaissance and have been found to deliver double the amplification of circular holes, which were often used in 10th-century fiddles. As well as this, elongating these engravings can increase the loudness of sound leaving a violin, so it can lead to a louder performance.

Some types of violin such as the electric violin don’t even have F-holes since the instrument’s volume comes from an amplifier, rather than the body.

The bridge is located between the F-holes, outside the front panel of the violin’s body. Its main function is to transfer sonic vibration from the strings, into the instrument’s body, via two feet. It’s really important that the bridge is crafted from a sturdy piece of wood, such as maple, in order to withstand pressure from the strings.

Changing the size and shape of the bridge will also drastically alter your tone. For example, the flatter variety makes it easier to play multiple strings at once, so are popular among folk musicians whereas curved bridges are favorites among classical artists, who need to focus on single strings without accidentally hitting another.

Incidentally, for amplification, you can attach a violin pickup to the bridge (some bridges have pickups built into them).

The fine tuners are found on the tailpiece of the violin, near the bottom of the front panel. These act as screws which move a lever to slightly adjust the tension of the strings. If you take a look at several different violins, you’re likely to notice that some have a set of four fine tuners, whilst others have just one in line with the E string.

If you’re a beginner, then choosing a model with a set of four is a wise move, as you’ll be less likely to break the strings when tuning. On the other hand, more experienced players should be precise enough to tune the violin solely using the tuning pegs, without damaging them.

Saying that, the type of string you use will also change which set you need. For example, traditional gut strings are stretchier and more pliable than modern steel strings, so will work better with just the one E string fine tuner. Steel strings, however, change pitch easily with only slight adjustments, so work well with a complete set of fine tuners.

The chin rest is a thin, circular area of material, made from plastic or wood which helps to support the musician’s head, whilst they play. Ultimately, the chin rest is designed to let the player hold the violin correctly (and comfortably), whilst also being able to move their left hand freely across the fingerboard.

Getting the right chin rest for you is very important, as an ill-fitting variety makes the player more likely to develop bad posture and to experience aching muscles or soreness. Some even contain extra foam padding, whereas others have more height to help support taller musicians.

All the options can seem overwhelming, so the best way to find your perfect match is to try out as many different varieties as possible in a shop, before buying.

Parts of the Bow

The bow hair is the part of the bow that rubs against the strings to produce a sound. Traditionally, real horsehair was used to craft almost every violin bow, however, nowadays a synthetic material is often used as well. In terms of tone, horsehair bows are almost always preferred over synthetic varieties, but either way, both types should be coated in plenty of rosin to produce a good sound (but remember to rub off the rosin after each use to avoid ruining your violin’s finish).

The frog is the part of the bow that the violinist holds whilst playing. In terms of function, this mechanism also connects the bow hair to the parallel running, stick we mention below.

The frog can be made from a variety of different materials, including tough ebony, ivory or tortoiseshell, and is often inlaid with mother of pearl for a nice aesthetic touch.

Although they look rather simple the frog is actually quite a complex device, as it contains technology that allows the screw to loosen or tighten the bow hair before and after playing.

The screw is found at the end of the frog and can be twisted to tighten or loosen the bow hair. If you completely loosen the screw, the frog comes off the bow, whereas if you tighten it, the hair tension becomes more intense.

This is important, as you should tighten the hair before you play, to ensure you get a rich tone. Then you should loosen the hair once you’re finished so that the extra stress doesn’t lead to the bow warping.

The bow’s stick is made from a flexible wood with a metal core. The wood’s bendiness is important, as the stick has to be able to adjust to account for any change in hair tension. Saying that, it should be lightweight too so that the musician can hold it without getting an aching arm.

As well as this, the stick must be balanced in a way that lets the musician play technical pieces of song, in a spiccato style. To be specific, this means that the bow should have a balance point at about one-quarter of the length up from the frog.

You can check this out by trying to balance the bow on your finger in this area. If it wobbles from side to side, it’s not balanced properly, so you’ll want to purchase a different variety.

The violin pad lies on the stick of the bow, in front of the screw and provides some extra grip for the musician’s index finger whilst they play. Usually, it is made from leather or snakeskin however, some manufacturers use rubber pads too.