13 Songs from the Iconic Pretty in Pink Soundtrack 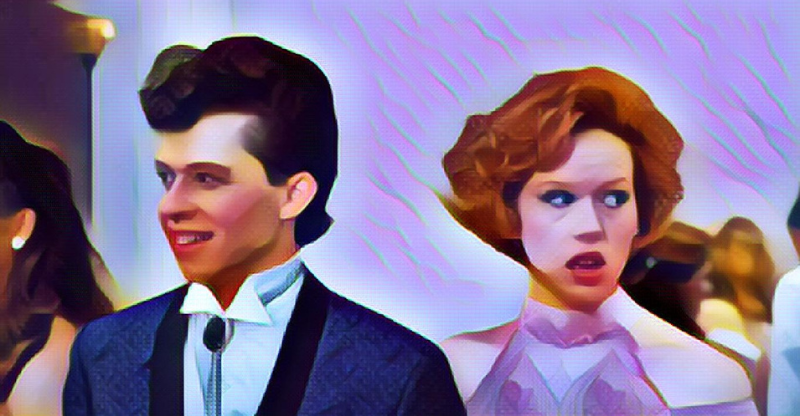 This classic tale explores the concepts of class, money, romance, and discovery of self as Molly Ringwald’s character tries to choose between her childhood sweetheart and a rich but sensitive player who might actually want to change his ways.

The Pretty in Pink soundtrack is packed with charting hits and has been acclaimed as one of the best modern cinema soundtracks of all time. Take a listen and relive the good memories or explore new sounds you just might love.

If You Leave – Orchestral Manoeuvres In The Dark

Featured in the final scene of the film, ‘If You Leave’ by OMD was written for the movie score. Andy McCluskey from OMD said they got to go to the film lot to watch Molly Ringwald and John Cryer filming. The original song they wrote for the score didn’t end up filming, so they had just two days to rewrite a new song. They stayed up till 4 am working and sent the song by motorbike messenger. The film team loved the new song, so ‘If You Leave’ was given life in the film.

Related: Listen to similar songs on our goodbye songs list.

“If you want me, you can find me left of center.” The song takes its title directly from the lyrics as Suzanne Vega sings the song included on the Pretty in Pink soundtrack. The song was released as part of the soundtrack in 1986 and featured Joe Jackson on piano. It was released as a single and reached the top 50 in Australia (#35), Ireland (#28), and the U.K. (#32). The song’s meaning has been interpreted as either a love song or an introspective song by fans. Depending on your take, the meaning fits the film either way, as Ringwald’s character isn’t the “norm” in some regards.

Get to Know Ya – Jesse Johnson

This heavily rhythmic, electronically crafted song by Jesse Johnson isn’t necessarily the most well-known song from the soundtrack, but the message is clear: “I just want to get to know ya.” Johnson was part of the original lineup for the funk rock band The Time, formed by Prince. Shortly after The Time hit huge success, Johnson left the band to go solo and ultimately contributed this song ‘Get to Know Ya’ to the Pretty in Pink original motion picture soundtrack and others to John Hughes films.

Do Wot You Do – INXS

The pop rock song ‘Do Wot You Do’ by INXS (pronounced “in excess”) features in the Pretty in Pink film score with a throbbing sax solo, rhythmic lyrics, and a classic 80s sound. The Australian band was initially known for its new wave/pop style but later developed into a harder pub-rock style with funk and dance overtones. The song reflects on an individual’s unique qualities, strengths, and the love found therein. “I need every minute with you. No one else can do whatcha do whatcha.”

Pretty in Pink – The Psychedelic Furs

The titular song of the film, ‘Pretty in Pink’ by the Psychedelic Furs, was originally released in 1981 as a single for their second album, Talk, Talk, Talk. The song was later re-recorded for the film. The original version topped U.K. charts when it was released, while the later version barely missed the top 40 on the U.S. Billboard Hot 100. The song has mixed meanings, depending on who’s talking. Ultimately, according to the lead singer, Richard Butler, the song isn’t about popularity but about gossip and shame leveled at an insecure individual. Rumor says Molly Ringwald loved the song and brought it to John Hughes.

Related: Find this song on our list of the best songs about colors.

By British group New Order, ‘Shellshock’ was released in March of 1986, appearing originally on the soundtrack for Pretty in Pink. The unique song uses a mix of freestyle music sounds and arcade-inspired sound effects. The song has two major versions, the six-minute version from the film and the original ten-minute cut used for the single. The song title refers to the shock of war, “shellshock,” a condition that soldiers and those nearby incidents may experience due to the trauma of war and enemy fire.

Round, Round – Belouis Some

Recorded by Belouis Some (born Neville Keighley), a British singer/songwriter, ‘Round, Round’ is a love song on the Pretty in Pink soundtrack. Love is challenging—and this song seems to be all about the intricacies of relationships that run in circles. “Going round and round, round again. I’m saying things I really shouldn’t say. I’m going round and round again. I guess you matter to me.”

The second single released by artist Nik Kershaw, ‘Wouldn’t It Be Good,’ was released in 1984. The song appears on the Pretty in Pink soundtrack two years later. Kershaw says the song is about “always wanting it better than everyone else,” a sort of “the grass is always greener” sort of vibe to the lyrics, with the same sort of lesson that it seems like a great idea, but probably won’t go well for you.

Bring on the Dancing Horses – Echo & the Bunnymen

‘Bring on the Dancing Horses’ by Echo and the Bunnymen first appeared on their compilation album Songs to Learn & Sing one year before Pretty in Pink came out. The song runs during the scene when Molly Ringwald’s character banters with her love interest (Andrew McCarthy) while they work at the record store. The song itself, according to the lead singer, Ian McCulloch, is about the way people view themselves. “People would sooner look at statues than themselves.”

A tender, acoustic song, ‘Please, Please, Please Let Me Get What I Want’ comes from The Smiths, an English rock band. The song is told from the perspective of someone who really just needs a bit of luck right now—for the first time. The melodic song evokes a deep longing and need, which fits the introspective question of the film—what is most important? Since the original release, many other bands have also covered this beautiful song, including the Dream Academy, Slow Moving Millie, Muse, and The Halo Benders.

Related: Hear another version of this song on the Ferris Bueller soundtrack.

Many classic crooners have sung ‘Try a Little Closer,’ but the Otis Redding version has become a favorite for many and found its home on the Pretty in Pink soundtrack. The song was first released in 1932, and Redding recorded his version in 1966, making it his own with a unique style. The song opens with a smooth, slow, soulful style, ending with an up in a bright, energetic R&B conclusion.

Related: A cover of this song features on our list of karaoke songs for men.

Recorded and released originally in 1966 by The Association, ‘Cherish’ is a sweet love song written in only about half an hour by Terry Kirkman. The hope was for an evocative, slow-tempo song that felt a bit like the Righteous Brothers’ ‘You’ve Lost That Lovin’ Feelin’.’ The song nails that goal solidly with its sweet lyrics and easy melody. “Cherish is the word I use to describe all the feelings that I have hiding here for you inside. You don’t know how many times I’ve wished that I had told you.”

Interestingly, ‘Rudy,’ the song by Talk Back, is in the film Pretty in Pink, but it wasn’t released as part of the film’s soundtrack (at least initially at the time). The band was a bar band from the L.A. area, though later rebranded as Headbone. The song can be difficult to find in the version used in the film, but a live version from the band is easier to find and sounds pretty darn good.