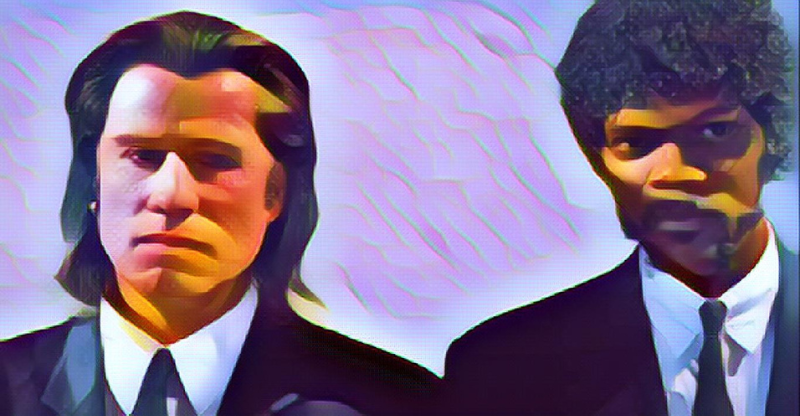 Quentin Tarantino has become one of the world’s most brilliant screenplay writers and film directors over the last two decades. He is known for hit films like Reservoir Dogs, the Kill Bill series, and 1994’s Pulp Fiction.

The cult classic takes place in Los Angeles, so the soundtrack features many surf-rock songs, R&B music, and rock classics. Take a look at the Pulp Fiction soundtrack below.

Quentin Tarantino’s iconic film Pulp Fiction opens with an epic guitar solo fit for the script. Dick Dale took ‘Misirlou,’ originally a folk song, and turned it into an electrified rock anthem with his band His Del-Tones. As the opening credits roll, Dale’s energizing guitar riffs blare from the screen, giving viewers a little taste of what’s to come in the story.

Related: Listen to a song that samples ‘Misirlou’ on our playlist of sports songs.

Director Quentin Tarantino loves to hit viewers with a dramatic intro to his films, and he does so in Pulp Fiction with masterful skill. After viewers are introduced to Dick Dale’s ‘Misirlou’ in the opening credits, Tarantino serves fans a seamless segway into Kool & The Gang’s ‘Jungle Boogie.’ He takes us from the rock-centric ‘Misirlou’ to Kool’s funk-filled ‘Jungle Boogie’ effortlessly as the epic tale of Pulp Fiction gets underway.

Related: When times get tough, find encouragement with these songs about being together.

Not many movies can claim responsibility for the resurrection of an entire musical genre, but that’s exactly what this movie did for surf-rock. The wave-tinged Californian vibes of the rock subgenre can be heard on The Tornadoes’ ‘Bustin’ Surfboards’ during a scene between two characters, Lance and Vince, as they make an illicit trade. Viewers became so enamored with the song playing in the background that the entire surf-rock genre saw a resurgence in the ’90s.

Songwriter Baker Knight wrote ‘Lonesome Town’ as a cynical take on the dealings of Hollywood. Ricky Nelson released the song in ’59 and related to it because he grew up as a child star and was all too familiar with how the entertainment industry worked. The pop/R&B tune plays in a restaurant as Uma Thurman’s iconic character Mia Wallace orders a milkshake.

“The only one who could ever reach me was the son of a preacher man.” Dusty Springfield’s infamous pop hit was so crucial to the scene in the movie that he refused to film it if he couldn’t get the rights to the song! ‘Son of a Preacher Man’ plays as John Travolta’s character, hitman Vincent Vega, meets Mia Wallace for the first time. Because of the movie’s popularity, the song climbed the charts once more 27 years after it first hit radio stations.

Related: Find this tune on our list of song titles with a profession in them.

This easy-listening tune featuring saxophone creates a heavy duality during the scene in which the main character Vincent gets high. The surf-rock band’s song being featured in Tarantino’s infamous film was the catalyst for them getting back together about a year after the movie’s release, even though they had been broken up for some time.

You Never Can Tell – Chuck Berry

One of the most memorable scenes still talked about today is a dance sequence between the main characters Mia Wallace and Vincent Vega. They get caught up in a Twist competition, a dance move popular in the ’60s, and as Wallace and Vega shake, shimmy, and jive Chuck Berry’s ‘You Never Can Tell’ whales over the scene. Because the scene was so influential, Berry’s song has become synonymous with the film.

Mia Wallace’s wild ways catch up with her in one particular scene when Urge Overkill’s ‘Girl, You’ll Be a Woman Soon’ plays. As Vincent tries to bring Mia back from an overdose, the alt.-rock song backs up the scene. ’60s heartthrob Neil Diamond originally wrote the tune, but director Tarantino chose Urge Overkill’s gritty cover version for the movie. Their music’s inclusion in the film brought the independent band into mainstream music charts.

Related: Hear similar songs on our list of songs about growing up.

“If love is shelter, I’m gonna walk in the rain.” The only original song written specifically for the soundtrack is found in songwriter Maria McKee’s ‘If Love Is a Red Dress (Hang Me in Rags).’ The song accompanies a pawn shop skirmish and is sometimes overshadowed by the fighting. McKee scored her second soundtrack appearance with Pulp Fiction. Her first appearance was for Tom Cruise’s movie Days of Thunder with her song ‘Show Me Heaven.’

Related: Strut over to our playlist of songs about fashion.

Bring Out the Gimp/Comanche – Peter Greene, Duane Whitaker, The Revels

‘Bring Out the Gimp/Comanche’ is overheard in the movie during a pivotal scene when the main character Butch Coolidge is faced with a life-or-death decision. The surf-rock song wasn’t director Quentin Tarantino’s first pick for the scene, though. He originally wanted to go with ‘My Sharona,’ but the song was licensed to another project instead.

Flowers on the Wall – The Statler Brothers

“Smoking cigarettes and watching Captain Kangaroo.” Bruce Willis’ character sings this famous line from The Statler Brothers’ song ‘Flowers on the Wall’ during the scene when he’s attempting to escape hitman Vincent Vega. The song was a big hit when it was originally released in the 1960s, and Willis would go on to quote it again in his future Die Hard film franchise.

Related: Head over to our playlist of the best flower songs.

Surf Rider – The Lively Ones

The final song that plays in Pulp Fiction during a memorable closing diner scene is actually a mashup of two different songs. As the movie fades out and the credits begin to roll, Tarantino combined an instrumental track from surf-rock band The Ventures with a sax solo track by The Lively Ones. This combination created a whole new tune that ended up being a hit due to viewer popularity.

The main character Mia Wallace talks about her “fifteen minutes of fame” on a TV show that didn’t last past its pilot as Link Wray’s instrumental song ‘Rumble’ plays. Though it was instrumental, its title was supposedly a slang term for “gang violence.” When this got around, it caused radio stations across America to ban it because they feared playing it would cause an outbreak of violent tendencies in its listeners.

Out of Limits – The Marketts

Surf-rock fans find plenty of inspiration this Quentin Tarantino soundtrack. During one scene when Bruce Willis’ character Butch Coolidge makes a getaway from bad guys with his girlfriend via a motorcycle, The Marketts’ hit tune ‘Out of Limits’ plays. The song was wildly popular after its initial release in the ’60s. It sold over 1 million copies globally.

Since I First Met You – The Robins

R&B song ‘Since I First Met You’ appears as Vincent tries a milkshake, the subject of much discussion between him and love interest Mia Wallace. The Robins helped shape the modern doo-wop era in the ’90s. But by the time the movie was released, their band had already called it quits and moved on to other projects.

Tarantino featured this funky soul tune during a brief transitional scene. However, he used it as a feature song in his film Jackie Brown. During the 1970s, the song was a big hit on the charts. Much like the Strawberry Shortcake dolls from the ’70s, The Brothers Johnson vinyl featuring the single was strawberry-scented.

Related: Catch this song on our list of songs about strawberries.