14 Songs from the Reality Bites Soundtrack 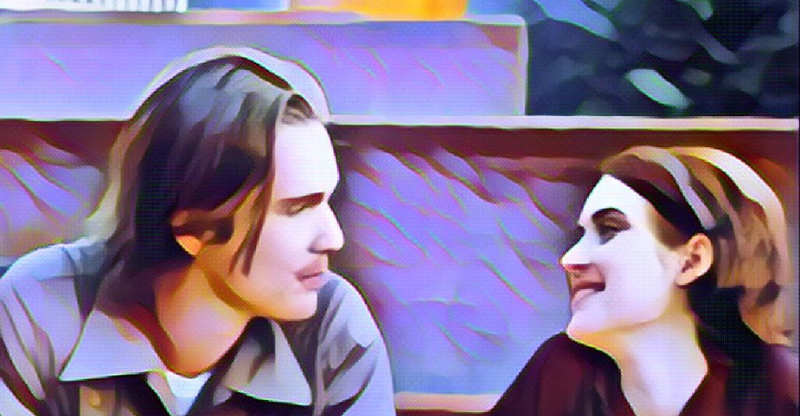 Reality Bites is considered to be a generation-defining film. As Gen-Xer Lelaina and her friends navigate newfound adulthood, she films their wins and losses documentary-style.

The raw, emotional film exposes the realities of a young workforce entering a less-than-welcoming market amidst personal dilemmas, existential crises, and coming to terms with reality after the safety net of college life.

Explore the Reality Bites soundtrack below which is full of dynamic and popular songs from various artists and bands.

My Sharona – The Knack

Considered to be one of Reality Bites’ most iconic scenes, The Knack’s ‘My Sharona’ plays as several of the main characters of the film dance in a gas station. The Knack’s own Doug Feiger wrote the song in the late ’70s. The subject of the song, Sharona Alperin, was only 17 at the time.

Related: Find this song on our playlist of songs about women.

As filmmaker Lelaina (played by Wynona Ryder) films her friend Vickie (played by Janeane Garofalo) at The Gap for her documentary in the film, The Juliana Hatfield Three’s ‘Spin The Bottle’ plays in the background. This short tune became a part of the grunge scene that took the US by storm in the 1990s.

Bed Of Roses – The Indians

Appearing on their album Indianism, alt.-rock band The Indians’ ‘Bed of Roses’ lends itself well to the coming-of-age Generation X story. Written by band member Angelique Bianca, the rock group consisted of both European and American musicians coming together for an original psychedelic pop-rock sound.

Related: Wake up and smell the roses while listening to these songs with flowers in the lyrics.

When You Come Back To Me – World Party

Playing during a montage of scenes featuring characters from the quintessential ’90s film, World Party is a side project of British solo artist Karl Wallinger. He wrote ‘When You Come Back To Me’ after being inspired by David Bowie’s mid-1970s song, ‘Young Americans.’ The song also plays as the end credits roll.

The Posies band member Ken Stringfellow once dated Wynona Ryder, the main character of the film, on which their song ‘Going, Going, Gone’ is featured. The Posies hail from Washington state, which was important at the time of the movie’s release when the pacific Northwest grunge movement was in full swing. Though the song made it onto the soundtrack album, it’s one of the few that ended up being overlooked by the Gen X audience.

Lisa Loeb didn’t even have a record deal when her song ‘Stay (I Missed You)’ was licensed for use in the youth-targeted soundtrack. That didn’t stop the single from climbing to number one on the charts and staying there for several weeks after the movie debuted. A 10th-anniversary song was released by Lisa Loeb & Nine Stories called ‘Stay (Living Room Mix).’

Related: This song features on our playlist of second chance songs.

Ethan Hawke’s character Troy is making his way to an airport as U2’s ‘All I Want Is You’ plays in the background. U2 frontman Bono originally wrote this song for his wife, Ali. The song’s lyrics chronicle the manic emotions often felt within relationships that ultimately go unfulfilled.

“I’ve been locked out. I’ve been locked in. But I always seem to come back again.” This moody song was featured on both Crowded House’s album Together Alone and on the soundtrack. The song can be heard playing in the movie when the main character Lelaina visits her friend Vicki at the popular clothing store, The Gap.

Spinning Around Over You – Lenny Kravitz

“Spinnin’ round and round and round.” This classic rock Kravitz tune fits in well with the soundtrack since it follows several disenchanted young adults around as they attempt to navigate a tough job market and tougher love lives. ‘Spinning Around Over You’ was released as a bonus track on Lenny’s Are You Gonna Go My Way album.

“I got a pothead mama, got a cokehead dad. I’m an ultramodern version of the American man.” Ethan Hawke asked several songwriters to write a song called ‘I’m Nuthin”. Though songwriters like Lisa Loebe pitched their ideas, the film crew went with artist David Baerwald’s version. Ethan’s character Troy sings this song in a poignant scene in the film when he takes the stage for a tell-all moment.

This angst-filled tune unapologetically combines genres like reggae, rock, and grunge for a unique sound fans have come to love from Dinosaur Jr. The band got their start in 1984, ahead of the grunge curve. Through the ’80s and ’90s, they carved out a path for their music, starting in their home state of Massachusetts and eventually reaching across the entire US.

Revival! – Me Phi Me

Rapper Me Phi Me has made a name for himself since the early 1990s by incorporating messages of African heritage, strength, and individuality in his music. This caught the eye of first-time director Ben Stiller. He was so enthralled with Me Phi Me’s song ‘Revival!’ that it became the only tune Stiller personally chose for the soundtrack.

There’s nothing like a good, ol’ fashioned car crash to captivate audiences, and in this ’90s cult flick, Squeeze’s ‘Tempted (94)’ plays just before main characters Lelaina and Vicki get into an accident. The song details a relationship that is failing and questionable decisions that former lovers make. The tune appears on the band’s 1981 album East Side Story.

Related: Be careful on the road! Here’s our list of the best driving songs.

During part of the movie, Stiller’s character Michael dates the protagonist Lelaina. As Big Mountain’s ‘Baby, I Love Your Way’ plays in the background of one scene, Michael and Lelaina are in the middle of their first date, hanging out in Michael’s car drinking Big Gulps.

Related: Hear this song on our playlist of love songs of the 90s.