Slang for Guitar – The Most Popular Terms You Should Know 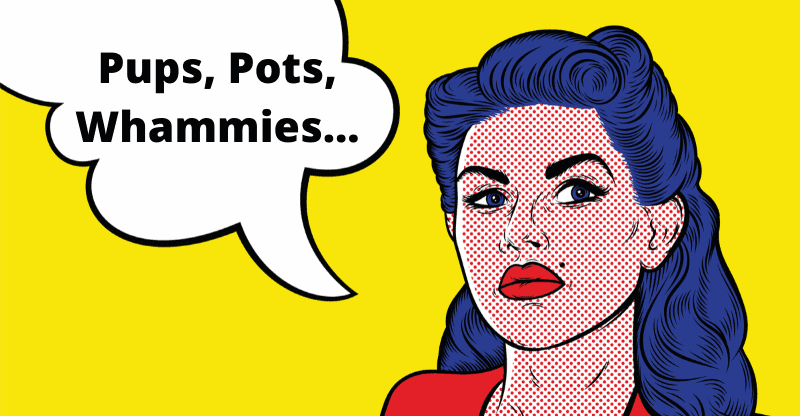 There is simply tons of guitar slang out there. In this article, we take a brief tour of the most popular terms you find used in guitar shops, recording studios, and online forums.

Using the term ‘ax’ to describe guitars dates back to 1955 when it was jazz slang for the saxophone. There has been speculation about whether this was because of the rhyme (Sax/Ax), or because of the swinging actions saxophonists tend to do mid-play.
The term then became popular with trumpets – because of the resemblance to an ax – and eventually became a common way to describe a guitar.

Bryan Adams described his guitar as a “six-string” in ‘The Summer of 69’. Although some guitars have twelve strings, and some even have seven, six is the most common number, so people know which instrument you’re referring to when you use this descriptive slang term.

The term ‘jazz box’ is sometimes used to describe semi-hollow body guitars. These guitars have violin-style f-holes, so they are lighter than solid-bodied guitars but can also cause feedback if you’re rocking out with them. They’re not hugely popular amongst rock players, but the likes of Dave Grohl and Chuck Berry have achieved brilliant results from them. As the name suggests, ‘jazz box’ guitars are most commonly used for jazz guitar.

Ever heard people talk about a “dirty” bass-line or a “filthy” guitar solo? The term simply means an overdriven sound. When the gain control on an amplifier gets cranked, the sound becomes increasingly distorted, or ‘dirty’. There are of course many guitar pedals available to create the same effect. ‘Dirty’ sounds are the norm in rock music, particularly on the heavier side of the scale.

The opposite of dirty sounds are clean sounds. Most songs contain at least some ‘clean’ guitar. This is when the gain on the amplifier is set below the threshold required to produce overdrive. When the electric guitar is clean, it sounds as close to an acoustic guitar as it can get. ‘Clean’ generally means free of any effects at all.

The type of distortion known as ‘fuzz’ could also be described as ‘dirty’. When a guitar sound is described as ‘fuzzy’, it means that it’s being clipped extremely hard, rather than being gently overdriven. Fuzz is heard all over the place, from Keith Richards (listen to Satisfaction) to Hendrix. Check out our review of the best fuzz pedals if you want to know more.

These technically aren’t slanged terms at all, they’re actually their proper names! They sound a bit jargon-ey, so we thought we’d include them anyway.

In both cases, these alternate tuning makes it easier to reach lower notes. It also makes it possible to play power chords with just one finger! Rock on!

Riffs – otherwise known as ‘ostinatos’ – are short, repetitive sections of music. These often become the theme of songs. Think ‘Smoke on the Water’, or ‘Sunshine of Your Love’; it’s likely that the riff is the first thing that jumps into your head. Popular riffs are usually simple sounding and easy to play, making them a huge part of most beginner guitarists’ learning process.

A lick is quite similar to a riff, as it’s a catchy melody that’s played on the guitar. However, licks don’t need to be repeated. They are often memorable parts of solos or used as intros to songs. Jimi Hendrix’s playing was full of licks, and it’s one of the words you’d use to describe the intro to ‘Purple Haze’, ‘Voodoo Chile’ or ‘Hey Joe’. Licks are usually higher in pitch than riffs, and often include a few more techniques such as bends, slides or hammer-ons.

Shred is a term used to describe very fast, impressive playing (using a technique called sweep picking). It’s most commonly associated with artists such as Yngwie Malmsteen, Steve Vai and metal guitarists like Dimebag Darrell and Zakk Wylde. The term is thought to originate from the idea that playing so fast and practicing for so long might literally ‘shred’ your fingers.

The whammy bar is the bit of protruding metal you often see on Stratocasters and many metal guitars (such as Ibanez). They let bend the pitch of your strings for some rather dramatic results (whammy bars are attached to what’s known as a ‘tremolo bridge‘).

There are numerous whammy bar tricks worth learning, with some pretty comical names such as a ‘dive-bomb’ or ‘lizard down the throat’. In the rock world, Jeff Beck is the undisputed king, check him out in action below:

Some people shorten the word pickups to ‘pups’ to describe the magnetic transducers that pick up the vibrations from the strings and convert them into signals to make an electric guitar sound. If you ever hear somebody in a guitar shop talking about swapping their pups, they’re probably not talking about exchanging pets.

Pots are the nickname for the tone and volume knobs on an electric guitar (short for ‘potentiometer’). When twisted, the electrical resistance of the circuit is altered, which in turn adjusts either your tone or your volume.

Another word guitarists often use is ‘rig’. ‘Rig’ is the term that describes the entirety of a guitarist’s equipment, including instruments, pedals, and amps. Guitarists often talk about “adding equipment to their rig,” or ask other guitarists what their ‘rig’ consists of.

So, we’ve covered some of the most frequent guitar-related slang terms, but there are plenty more. Be sure to check out our guitar anatomy article for a glossary of all the parts of the guitar (acoustic and electric).