15 Songs about Alaska, The Last Frontier 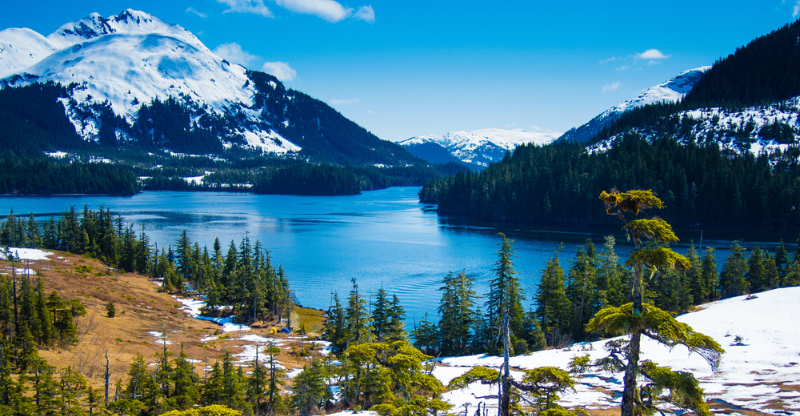 The U.S. state of Alaska is known for its stunning natural geography, incredible size (it’s by far the biggest state in area), and extreme, sub-zero weather conditions. It’s also an incredibly remote place, and as we’ll see in these songs, it’s often used to represent a place of innocence and beauty to escape to.

So grab your snow boots and prep the huskies. It’s time to check out some songs about Alaska!

This classic song talks about the early settlement by U.S. travelers headed “North to Alaska.” The lyrics tackle these adventurers’ gold fever and talks about falling in love in a new place. It reminds listeners that no adventure or fortune makes up for loneliness and the human need for affection.

Alaska and Me – John Denver

John Denver sings of Alaska and its people here. He talks about how he dreamed of the state when he was a young boy living in the city and knew that he wanted to live there – a dream he eventually brought to fruition. The song also highlights the freedom that Alaskans enjoy as American citizens.

Here’s a folk-dance piece that’s about leaving a person or place behind and finding a new beginning. This track first came to public attention after a video of Maggie Rogers’ session (at Pharrell Williams’ Clive Davis Institute of Recorded Music class) went viral. The song was inspired by Rogers’ own experiences in Alaska and highlights the challenges we face in life.

The narrator here seems to be in a downward spiral. He also doesn’t seem to be moving forward in life or improving himself: “I haven’t checked my time and I haven’t checked my mind/Since I saw the northern lights in Fairbanks, Alaska.” He doesn’t know who he is and doesn’t want anyone else to make assumptions, either.

This piece has a protagonist who wants to move and begin a new life in Alaska. He wants to separate himself from the people, places, and things of his past that caused him hurt. It seems like Alaska is a symbol for any new, faraway place that someone can find a new beginning in.

Sophia Kruithof sings of a young man who has left home here. His family hopes he will come back, but he wants to be free in the wild of Alaska. He realizes that this is where he belongs, even if his loved ones haven’t come to terms with it yet.

Where Legends Are Born – Hobo Jim

This track talks about the rich history of Alaska and the legendary people that came from the state. Hobo Jim sings of the different types of people who made Alaska their home and the impact that they had on the area and the world.

‘Alaska’ ties into the album it appears on, 11:11, as the time and its potential to bring on wishes and new beginnings make an appearance in the lyrics. The song finds its protagonist using time on an airplane as a survey of both the landscape and life in modern society.

This is Johnny Cash’s cover of Johnny Horton’s classic track. It finds the narrator getting involved with the wrong woman; the listener is led to believe that he meets an untimely end by the song’s finish and that he realizes that Alaska is a cruel place for him to be.

This song is about a young woman who realizes she has made mistakes and wasted her life so far. She has given her life to people who weren’t as dedicated to her. People call her Alaska, which seems to mean that she’s tough or strong in some way.

Here, Lacy J. Dalton says she’s going to go to Alaska to have fun. She talks about the highlights and weather in the state, and says that she isn’t worried about the coldness at all. She seems to think she’s going to change once she goes there and even find romance so she won’t be lonely anymore.

To the Wild Country – John Denver

The protagonist here doesn’t know who he really is, as he seems to have lost himself. He is called to Alaska by its wild and natural beauty. He feels like he can be free there and feel like he belongs. He also laments the changes that happen at a rapid pace in society and says that Alaska helps him deal with these facts.

Hailey Gardiner says she will go back to Alaska one day and return to her roots in this acoustic song. The song is a gentle celebration of the Earth’s natural beauty and slowing down in a place that feels like home.

The Bee Gees talk about different states and cities here. The song seems to compare these locations to women and also talks about the narrator’s love life. It seems that this guy is down on his luck and wants to go back to his home of Alaska to regroup and see what he can do with his life moving forward.

This song is about the life of a travel agent. It was part of a series of songs by Jethro Tull about everyday working people. The travel agent wishes that he could go on adventures with his clients to the places that he helps these people get to.