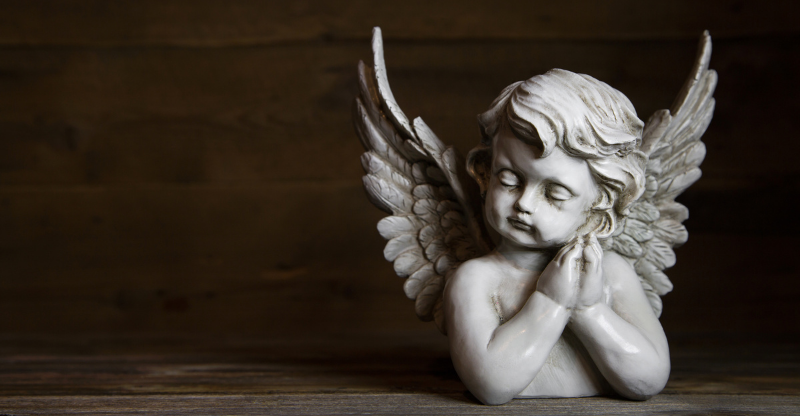 It’s easy to see how angels could inspire music. The very concept of angelic beings creates creative opportunities that many a music artist has taken advantage of. Here are some of the best songs about angels or that use angels as a symbol of something else (often love) to inspire you.

Angel of Harlem – U2

The angel of this song is Billie Holliday, who moved to Harlem in 1928. It’s a tribute to Holliday and her struggles but also to the gospel, blues and jazz music that U2 listened to while traveling America as a touring band. Holliday’s nickname “Lady Day” is also referenced in the song.

Related: This also features on our list of new york city songs.

The protagonist of this dream finds the clean-cut mental images of his high school crush ruined when he sees her in the centerfold of a magazine. He is disappointed by the fact, finding his memories of the girl he put on a pedestal to be destroyed forever. This 1981 release has remained popular over the years, making numerous television and film appearances.

Robbie Williams sings of a guardian angel—in this case, a loved one who has passed on and watches over him. This touching piece went on to be Williams’ most popular and best-selling track. He makes it clear in the song that when life and other humans have let him down, he’s “loving angels instead.”

Lips of an Angel – Hinder

This track is about the challenges that come with trying to let go of a love that has ended. It was written by Austin Winkler and Cody Hanson of Hinder in 30 minutes or less in Hanson’s living room. The song was inspired by real-life experiences, giving it an authenticity that listeners can relate to.

Mariah Carey asks a love interest if they can try their relationship again after a tumultuous breakup that takes her by surprise in this track. The song first appeared on an EP in 2009 but was re-released in 2010 on the album Angels Advocate, now aimed at Urban A/C radio stations. Ne-Yo features on the 2010 version.

She Talks to Angels – The Black Crowes

This song was inspired by people that the Black Crowes band members knew from clubs; it’s about the dark side of humanity and feeling lost while giving in to bad habits while out on the town. Lead singer Chris Robinson hadn’t experienced these issues himself, so he had to draw on others’ experiences and his imagination to write the track.

There Must Be an Angel (Playing with My Heart) – Eurythmics

This is a rare joyful love song from Eurythmics, where lead singer Annie Lennox says that angels might be playing with her heart, as she feels so surprisingly happy with her love life. Stevie Wonder provided a harmonica solo on this piece, which ended up being the band’s only song to chart in the United Kingdom.

Jealous of the Angels – Donna Taggart

Jenn Bostic wrote and sang this song after the death of her father, finding popularity that led the track to Donna Taggart’s ears. Taggart eventually recorded her own celebrated version. It’s about missing someone special and wishing you could be like the angels around that person so you could be with them again.

Send Me an Angel – Scorpions

In this story-based tune from Scorpions, the narrator is being instructed by a wise man character. The wise man is helping him to fulfill his life’s purpose by getting over the things that bother him in life. In the chorus, the protagonist asks for a wise angel of sorts to be sent to him to help him on his journey.

This song talks of activist and 1980 vice presidential candidate Angela Davis, who ran into some legal trouble in 1970. The song criticizes racist stereotypes that may have been considered offensive even at the time of its release if it had not been a clear criticism of the terms sung.

Earth Angel (Will You Be Mine) – The Penguins

This Penguins hit is considered to be one of the best doo-wop tracks in history. It was originally recorded in a garage and released on a small Black-owned label, but went on to sell over four million copies. The protagonist sweetly asks an angelic love interest to be his girl throughout the track.

Angel of the Morning – Juice Newton

Chip Taylor wrote this 1960s classic, with many artists singing it in addition to Juice Newton around the time that it was created. It’s about a difficult yet passionate love affair that may have been considered quite scandalous at the time. It was nonetheless an international hit, charting in many countries after its release.

Charley Pride says “You’ve got to kiss an angel good morning” to have a happy marriage in this track. The angel of this track is not a spouse, however; writer Ben Peters was actually talking about his newborn baby, Angela, whom his wife reminded Pride to kiss every morning before heading to work.

Billy Joel attempted to answer his young daughter’s question about where people go when they die with this track, which serves as a lullaby to the seven-year-old. Joel promises her that he will always be with her in some way, as his love and her connection to him cannot die.

Angels and Sailors – The Doors

This Jim Morrison track features his band The Doors. It reflects on some of the darker sides of life that we don’t always face out in the open—as well as some of the brighter parts of existence, such as love. Morrison asks a love interest, “Will you die for me?”, which seems to ask a larger question about how important romantic connections are to individuals when viewed as part of the song’s broader context.