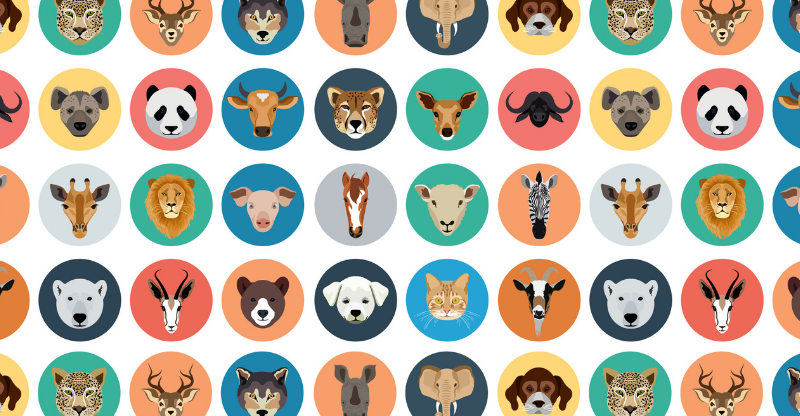 This playlist is a bit like a zoo of tunes. You’ll find dogs, cats, zebras, buffalo, and even a dragon!

As you’re about to see, these songs about animals are full of symbolism that create the perfect metaphors (most aren’t really about animals). So sit back and enjoy.

I Love My Dog – Cat Stevens

Dogs are man’s best friend, and here we have a man—whose name is Cat—singing about how much he loves his pal! He equates his love for his dog to his love for his lover and claims that the dog will be more loyal than his lover could ever be. This popular dog song wasn’t a hit in the US, but it reached the Top 30 in the UK.

Here’s a classic cat song. However. the “cats” in this song refer to cool guys, and the title of the song is a reference to a TV show of the same title that ran in the ’50s. The narrator is at the pub telling stories, and then he goes to a club and finds a girl to take home. In all the stories, the main character is disappointed with the outcome, including the guy after spending the night with the girl.

‘Free Bird’ was on Lynyrd Skynyrd’s debut album in 1973 and quickly became an instant classic. It charted at 19 and 21 in the US and UK, respectively, and people have associated it with different meanings over the years. This bird song was intended to be about a man telling a woman that he’s a free spirit and can’t be caged, but many people understand it to be inspirational and emotional, using it at funerals and graduations.

In this song, a man is trying to convey to his lover just how much he loves her as their relationship is falling apart. She wants to leave, but he wants her to stay, saying that “wild horses couldn’t drag me away.” This song was initially written for Keith Richard’s son, but it was rewritten about Mick Jagger’s failing relationship.

This song tells the story of Rocky Raccoon, who got in a fight with Dan after he stole Rocky’s girlfriend. The story has a wild west theme, and Rocky’s name was chosen because it made him sound like a cowboy. Rocky didn’t do well in the fight and misunderstood the Gideon’s Bible – which is in almost every hotel – as a sign that he needed to stop fighting. Fun fact: the Marvel character Rocket Raccoon was named after Rocky.

There are many different interpretations of ‘Slow Cheetah’ and what the animal represents. A popular understanding of this song is that it’s about struggling to fit in. A slow cheetah is unnatural, and the girl mentioned was told she’d never be like the girl in the magazine. Others assume it’s about battling with addiction and loving the struggle, even if it’s bad for you.

The pigs in this song are corrupt politicians who started a war but wouldn’t dare go fight it themselves. The singer says that they’re “making war just for fun.” But, God will make the corrupt war pigs pay for their crimes. The song ends with a harsh vision of the pigs begging for mercy. This song about war came out in 1970 during the Vietnam conflict when many citizens were being subjected to a draft.

Bat Out of Hell – Meat Loaf

You can assume that a bat flying out of hell would zoom past your head, so it’s the perfect analogy for this fast-paced song. The song is about a guy who wants to hit the road on his motorcycle but ends up in a fatal crash. His heart broke out of his body “like a bat out of hell.” That’s quite the visual, isn’t it?

Zac Brown pretty much wrote a list of everything he loved, put it to music, and made a song that made it to number 20 in the US. He likes his chicken fried, perfectly-fitting jeans, family, and freedom, all of which are pretty typical in the southern United States. This song has a nostalgic and comforting feel to it that’ll make you want to grab some comfort food and watch old home videos. Unsurprisingly, it’s on every country karaoke list.

You’ll find yourself dancing to this song even though the story it tells is a downer. It tells of a man who loved to dance the Crocodile Rock (which isn’t a real dance), but as the years went by, the dance fell out of popularity, his girlfriend left him, and he didn’t even have his favorite pair of jeans anymore. He was left at the jukebox to dream of better days. Everyone in the UK and US was dancing along since it made it to the Top 10.

Ants are methodical and are programmed to do the same thing every day, which is to work. Dave Matthews sings of a man who’s living a similar life. He “never changes a thing, the week ends, the week begins,” and that’s his life. It’s one of the more interesting songs about working in recent years and inspires people to break out of their boxes and lead interesting lives.

Kurt Cobain is talking about the “macho men” who are, as he describes them, “very ape and very nice.” He didn’t respect this type of man very much because he saw them as shallow and fake. The song is sung from the perspective of one of these guys, and “I’m too busy acting like I’m not naive” is the perfect way to describe how Kurt felt about them.

Perhaps one of the most popular motivational songs ever made, ‘Eye of the Tiger’ is frequently used by people training or working out to get hyped up and power through the pain. Survivor recorded the song for the movie Rocky III, and it instantly became a hit. It’s still one of the best songs about never giving up.

This song was written and sung by Grace Slick, who had grown up in the suburbs but didn’t want to be a housewife. Instead, she went and joined a band and experimented with different substances that eventually led to her writing this song. The song is about Alice’s Adventures in Wonderland and draws attention to how many substance references there are in this children’s story. Unsurprisingly, the song was a favorite with hippies in the ’60s.

Many people assume that this song is one big analogy for a certain popular herb that will make you fly like a kite, high up in the sky. This song was released in 1963, but Peter Yarrow wrote it in college in 1958. The band insisted that the song was about childhood innocence and nothing more, especially since Peter didn’t know what this herb was when he wrote the song. The song almost hit number 1 when it came out.

Some say that the name “Buffalo Soldier” was what Native Americans called black soldiers. The buffalo were recognized as brave animals, so it was a positive term. Bob Marley sings of these Buffalo Soldiers who were “taken from Africa, brought to America, fighting on arrival, fighting for survival.” He’s undoubtedly talking about enslaved black people who had to fight wars for America.

This song is about a man who is (metaphorically) chasing after a woman he desperately wants to be with. He compares his desire to a hungry wolf as though he’s on the hunt for her. This song was responsible for making Duran Duran known in the US, and it was probably because of the music video that aired on MTV. The wolf song actually charted higher in the US than it did in the UK!

The black cow in this song is a beverage, most likely a root beer float or a milkshake. The song is about a man and woman who split up but seem to run into each other every now and then and rehash the past over a “black cow.” Even though this song wasn’t released as a single, it was still played on the radio and was pretty popular, although it couldn’t be ranked on the charts.

This monkey song has a self-deprecating tone since the singer is referring to himself as a monkey. “Shock the monkey” isn’t as gruesome as it sounds; he’s saying that his lover is going to make him jealous. Calling himself a monkey may mean that he’s a fool for getting jealous in the first place.

Like many other songs from The B-52s, ‘Rock Lobster’ has playful lyrics that are fun to dance to and don’t require much thought. A rock lobster is another name for a crayfish or crawdad, but in this song, it also doubles as a musical crustacean that created a “motion in the ocean.” Each lyric is short, so the emphasis is on the music in this one, making it a good one to play at a party – it’s also one of the top karaoke songs of all time.

And Dream of Sheep – Kate Bush

Kate Bush sings of someone who is alone and afraid in the water. They want to fall asleep and “dream of sheep” to escape their fears, but it’s too dangerous to do so since they’re just floating there (they probably won’t wake up). This situation is a bit like a metaphor for real-life fears. You may want to sleep to escape your anxieties, but sleeping (in other words, ignoring) will only make it worse. You have to stay awake and endure the storm. This track appears on our playlist of dream songs.

This dreamy song will have you wishing you could run away like a zebra or fly away like an airplane. The song may transport you back to the 2000s because it was written back then but wasn’t released until 2014. Alicia Keys was inspired by a painting when she wrote this, which is probably why it sounds so dream-like.