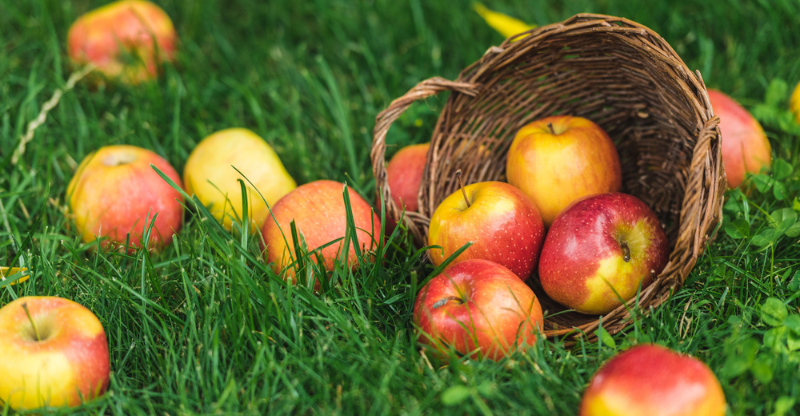 How many songs about apples do you know?

No fruit is quite as iconic as the apple. No wonder musicians have drawn inspiration from this delicious, juicy, and eye-catching fruit to write songs about various topics.

Here are some of the most well-known songs about apples for you to learn more about. You’ll crave an apple pie in no time!

This is a somewhat undecipherable track by Bob Dylan and The Band that discusses two people sitting beneath an apple tree. It’s never been performed live, and its lyrics were always considered a mystery, seemingly even to The Band. It has a classic blues and folk sound that was inspired by the music of the 1920s and 1930s.

Many different artists performed this classic piece, but the Andrews Sisters popularized it after singing the track in the movie Private Buckaroo in 1942. The protagonist reminds her love interest that she’s been faithful to him and asks him for the same loyalty. It’s a feel-good song that was designed to boost morale in a time of war.

Related: Feel good with our list of uplifting songs.

This track compares fruits and vegetables to various aspects of life, particularly the hardest to deal with. The inevitable end of life and rotting of fruit take center stage, with the lyric “I’m losing things so fast” highlighting the protagonist’s struggles with adjusting to change. ‘Applesauce’ was rewritten at least two times before its release.

Here’s the title track to Nina Nesbitt’s second EP album. It compares a love relationship failing to the downfall of Adam and Eve in their Biblical story. Nesbitt was inspired to write the song after seeing an apple orchard in which the Sticky Studios recording studio was built; the album was produced at that studio.

Related: Here are the best songs about trees.

Beady Eye talks about love and life in the first single from their second album, BE. The 1969 song ‘The Old Man’s Back Again’ by Scott Walker inspired this piece. It’s an interesting track in that it contains no chorus, highlighting the main lyrics instead to make its point about the present themes.

In this track, a female protagonist sees an attractive man in a club that she compares to sweet desserts. She tells him how she feels about him even though he is good-looking enough to be intimidating. It turns out that his personality is as appealing as his appearance is, much to her satisfaction.

Related: Nothing’s sweeter than our list of the best songs about sugar.

The male protagonist of this track notices a cheerful, fashionable, and attractive woman shopping—eventually, the two fall in love. Pink Floyd performed this track during their first American television appearances. “Apples and oranges” in this case refers to the woman’s shopping list rather than comparing two opposite things.

Related: Energize your shopping spree with this list of songs about shopping.

This 1947 track finds the protagonist discovering a woman he wants to know near an apple tree. He describes what she looks like and what is standing between him and her to the listener. Sonny Boy Williamson died in a Chicago robbery the next year after performing at his last concert.

The White Stripes sing of a woman who’s been hurt by the man she loves. The protagonist has feelings for her and encourages her to let him help her in a somewhat pushy way. It’s a simple song in the band’s typical style. It was the first piece that the band performed on television.