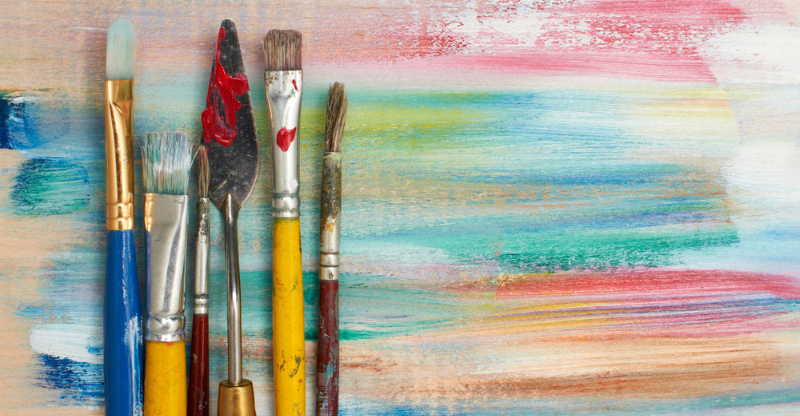 Are you feeling artistic today? This playlist will be perfect for you!

Making music is an art form all its own, and these songs use it to celebrate other types of art. There are many references to famous painters, paintings, and the power of art in general found in this list of songs about art.

Though art is subjective, there’s no doubt these are some amazing tunes. Let’s get artistic!

Andy Warhol was a prominent figure in the pop art movement and a big inspiration for David Bowie. Though the lyrics aren’t exactly flattering—”Andy Warhol looks a scream, hang him on my wall”—the song reminds us of his integral role in film and music. The disjointed guitar playing and interesting melodies make this song a unique listening experience.

Related: Hear this song on our list of the best hand clapping songs.

This emotional piece is an ode to the life and work of Vincent Van Gogh. Van Gogh created many beautifully iconic art pieces, but his life was fraught with mental health struggles. Don McLean describes his work, “starry, starry night, paint your palette blue and gray,” and alludes to how people overlooked Van Gogh’s struggles because he was still able to create such good art. “They would not listen,” but with his death, “perhaps they’ll listen now.”

Related: Listen to these star-filled songs about night sky.

This waltzing tune was inspired by a photo called “Rene and Georgette Magritte with their dog after the war.” This was an actual photo of the couple, comprised of the artist René Magritte (known for surrealism) and his wife, Georgette. It’s a tribute both to the peaceful love of the couple and to the bands the couple was a fan of (at least according to the song).

‘Blue Period Picasso’ personifies one of Picasso’s art pieces, taking on the perspective of the painting. The painting is tired of hanging on the wall and being gawked at, begging for someone to let it rest. It says it is “trying to figure out how to get down, ’cause this solitude is bringing me down.”

Related: Exhausted? Here’s a playlist of tired of life songs.

‘Artists Only’ is a lyrically sparse song with instrumentation that makes you anticipate each section. There seems to be a sort of anger towards the general perceptions of art and artists. The line “I don’t have to prove that I am creative!” references how frustrating it can be that certain people will only think you’re talented if you do art their way. The weird vocal adlibs in this song prove that the Talking Heads don’t need to conform to be creative.

Related: Show the world you’re proud of yourself with these songs to post yourself to.

This attitude-filled song features a steady beat and uses only one chord for the whole song! It is still sonically interesting, though, especially with the lyrics. The narrator uses a comedic tone to talk about how Pablo Picasso must have had it easy since he wasn’t ever called names for trying to pick up girls.

‘Waste of Paint’ is, at its core, depressing. With the opening line, “I have a friend, he’s mostly made of pain,” you can expect a sad song with gloomy lyrics. Bright Eyes tells the stories of different people, but each verse returns to the bleakness of life. Hard times and poor decisions can damage your self-esteem and outlook on life, making you feel like a “waste of paint” yourself.

This beautiful piano ballad is filled with emotional melodies and lyrics like a gut punch. Rufus Wainwright sings from the perspective of a girl who fell in love with her art teacher and never moved on, despite her later marriage to a wealthy company executive. Through each phase of her life, she still says, “never have I loved any other man.”

Related: Check out the best songs about loving someone you can’t have.

This song is intense and moving, using an alternative rock style to convey its message. Willem de Kooning was an expressionist painter with Alzheimer’s disease, clearly referenced with the line, “say you can remember, say where is the tomorrow.” Manic Street Preachers seem to mourn the public’s inability to have an eye for beauty, wishing we could be more like this artist.

Harry Belafonte’s crisp, reverberating vocals carry us through the fable-like feel of this song. It’s stripped back and soothing and seems to sing about an old west kind of life. Belafonte loves his land, his horses, and his life. It sounds like he’s ready to move on, though, with some references to death like “when I die, take my saddle from the wall, put it on my pony.”

René Magritte was an artist well-known for his uniquely strange paintings (you are probably familiar with his piece The Son of Man, which features a man in a bowler hat, his face mostly covered by a green apple). Magritte’s paintings can sometimes be unnerving for inexplicable reasons, and this song’s thrumming drums and ominous strings match that idea very well.

Third of May / Ōdaigahara – Fleet Foxes

The Third of May 1808 is a painting by Francisco Goya, a Spanish painter aiming to represent the Spanish resisting Napoleon. This song by Fleet Foxes is about unrequited love, but it drew some of its imagery from the painting. They sing, “light ended the night, but the song remained.” No matter how many days pass, the love won’t fade away.

Nat King Cole’s honey vocals pair with the romantic strings of the song to make a gorgeous ballad. This song compares a woman to the famous painting Mona Lisa, wondering if her cold and mysterious exterior is her true personality or if she is hiding her warmness from the world. “Are you warm? Are you real, Mona Lisa? Or just a cold and lonely, lovely work of art?”

Related: Find more of the best songs with girls’ names.

When I Paint My Masterpiece – Bob Dylan

This song features a narrator that seems to be blinded by longing. His goal is to paint his masterpiece, and everything he does falls into the background compared to this desire. He’s missing the people and places around him as he strives for his masterpiece, and he doesn’t realize the problem, saying, “Someday, everything is gonna be different when I paint my masterpiece.”

Related: Feel hopeful with our list of hope songs.

Going Down – The Stone Roses

This indie song has intricate drum lines and melodic electric guitar, and its suggestive lyrics give meaning to its title. ‘Going Down’ is about spending a night with someone and feeling drunk on their beauty. The narrator compares the woman he’s with to art, saying, “she looks like a painting, Jackson Pollock’s No. 5.” This painting is incredibly famous, but maybe not the best one to be compared to since it is super abstract and looks messy at a surface-level glance.

Related: Here are the best songs about beautiful women.

Coldplay got the name for this song from the painting of the same name by Frida Kahlo. The song tells the narrative of a king who has lost his kingdom, and the intense strings and ringing bells help to add a royal quality to the track. The narrator reminisces the world he has lost, singing, “one minute I held the key. Next, the walls were closed on me.”

Related: Start your morning with the best wake up songs.

The Jam celebrates the freedom of art school and the talent of artists in this rocking song. People might criticize you for pursuing art, and society might tell you that it isn’t a realistic occupation, but you “don’t need permission for everything that you want.” You’re allowed to do whatever you want for the sole reason you want it!

Related: Feel good with these songs about self esteem.

What the Water Gave Me – Florence and the Machine

Florence and the Machine have many songs with that satisfying combination of rock and indie, and ‘What the Water Gave Me’ is certainly one of them. The song is named after the painting by Frida Kahlo, which features a bathtub full of strange and thought-provoking imagery. Haunting lyrics like “lay me down, let the only sound be the overflow, pockets full of stones” offer a glimpse into the power, deadliness, and freedom found in the water.

‘Picasso Baby’ mainly centers around having wealth and wanting more. Jay-Z raps about his success and riches, naming several famous artists whose paintings would make his house comparable to the Louvre. These artists’ work is almost exclusively found in museums, so owning any of them would certainly be a sign of Jay-Z’s unattainable status.

Related: Can’t get enough? You might want to hear these songs about selfishness.

‘Painter Man’ is one of The Creation’s most popular songs, with its echoing drums and riveting group vocals. The song tells the story of a painter, alluding to the often unsuccessful journey of a career in the arts. Artists of all kinds are often discouraged from pursuing their talents in the “real world” because it’s supposedly unrealistic, and they won’t make a good living. The subject of the song says he “studied hard, gained my degree but no one seemed to notice me.”

Max Ernst was a German poet, sculptor, and painter. This punk-rock song talks about some of his art pieces and how many people at the time rejected his ideas. “People did not like that man Max Ernst.” The repetition of “dada” at the end references how Ernst is one of the figureheads of the literary and artistic Dada movement.

Cézanne is an iconic artist that is sometimes called “the father of modern art.” He was one of the first to start painting images with heavy texture and depth. Like any revolutionary, Cézanne was criticized for his new techniques—”early on the reviews, they were bad.” But his style changed art forever, and this song celebrates his passion.

‘The Night Watch’ is a famous painting by Rembrandt in 1642. The size and style of this painting, which depicts a militia, were revolutionary for its time. This song works to tell the different stories that can be gleaned from the artwork with lines like “they make their entrance one by one, defenders of that way of life.”

Picasso’s Last Words (Drink to Me) – Paul McCartney and Wings

The chorus of this slow and peaceful ballad features the lines “drink to me, drink to my health, you know I can’t drink anymore.” These were Picasso’s last words. Picasso is one of the most famous artists of all time, and his death left a lasting impact on those who were not even in the art community. This song works to celebrate his life and etch him into time.