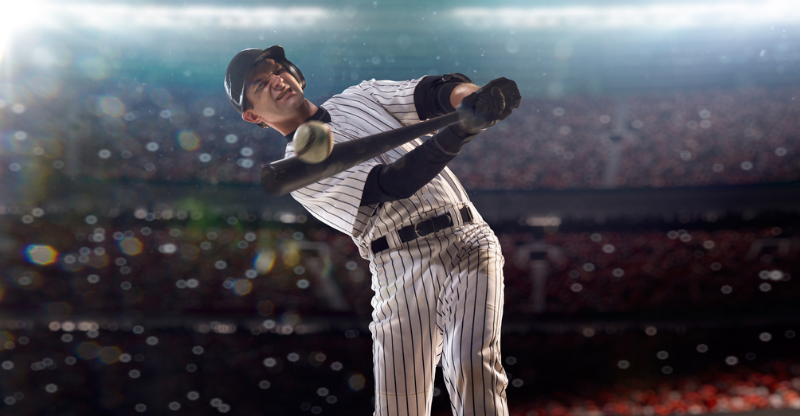 Baseball is one of America’s top longstanding traditions. Families and friends have long gathered in front of TVs and at legendary stadiums like Wrigley Field to watch their favorite players and teams battle it out.

With references to greats like Willie Mays and Joe DiMaggio, here are some of the best classic and contemporary songs about baseball.

After a friend gave Cashman a picture of several Mets players posing centerfield at Shea Stadium, the songwriter began composing a tune honoring the storied history behind one of America’s favorite sports. Greats like Yogi Berra and Bobby Bonds are mentioned in the tune. ‘Talkin’ Baseball’ appeared on the 1981 album, Cooperstown.

Les Brown and his orchestra took the song written in 1941 by writers Alan Courtney and Ben Homer and gave it new life. With lyrics paying tribute to one of football’s greatest players, centerfielder Joe DiMaggio (who spent some time married to movie star Marilyn Monroe), ‘Joltin’ Joe Di Maggio’ covers his epic career highlights and his “one man show” status.

After being approached by The Red Sox organization to record the song for the team in Boston, Celtic-punk band Dropkick Murphys jumped at the chance. ‘Tessie’ was a song from the 19th century Vaudeville era that became a popular tune to sing at baseball games. The Red Sox brought the tune back to life with the punk band in 2004, which must have been a good luck charm. The team won the World Series the same year.

This tune was featured on Bruce Springsteen’s chart-topping 1984 album, Born In The U.S.A. ‘Glory Days’ is about a real-life encounter with a high school buddy who was a baseball star. The song features Springsteen and his high school buddy taking a walk down memory lane. This is one of Bruce’s favorite songs to play acoustically when he sits in at bar gigs on the Jersey shore.

Related: See our top pick of song for the good times.

Released by Epic Records in the early 1950s, this is a song about Giants star player Willie Mays. It was covered many times by different artists like The Singing Wanderers and Johnny Long. Epic Records was formed in the 1950s in order to feature artists of marginal genres such as jazz and classical.

Taking a darker turn than the average baseball-themed tune, Paul Simon’s ‘Night Game’ tells the story of a player who dies suddenly during a game. Though light-hearted in production, the overall theme poses questions about the trivial nature of things like sports when it comes to the realities of mortality.

Singer-songwriter Billy Bragg and rock band Wilco were given journals written by the late Woodie Guthrie which contained old bits and pieces of lyrics that had never been constructed into complete songs. After rifling through the pile, the musicians sat down and wrote ‘Joe DiMaggio Done It Again’ based off of Guthrie’s unfinished lyrics. The main moral of the story is: Never underestimate “Joltin’ Joe.”

Included on Kenny Rogers’ 1999 album She Rides Wild Horses, his tune ‘Baseball Song’ features the story of a little boy playing baseball by himself in the yard. He throws the ball high in the air and attempts to hit it but he always strikes himself out. Pitching doesn’t go much better. Despite his less-than-stellar playing, he tells himself “I’m the greatest player” when being called in for supper.

Sports can often serve as inspiration for artists, and for Fogerty his tune ‘Centerfield’ is about his early days watching his favorite game. He loved listening to his father’s stories about legendary Yankees player Joe DiMaggio, who hailed from San Francisco just like Fogerty. He wrote the lyrics to serve as a metaphor for overcoming life’s challenges and staying motivated in the face of opposition.

Related: Go to our playlist of songs about overcoming challenges.

Released towards the end of their career on their 1987 album No Easy Walk to Freedom, Peter, Paul, and Mary’s song ‘Right Field’ reflects on sports played as children, and the positions on the field given to kids with less athletic ability than others. Despite the kids not being as gifted as the others, they still had fun playing the game. This song also appeared on a themed album for children released in the 90s.

Load Up the Bases (The Baseball Song) – Whiskey Falls

Whiskey Falls didn’t stick together for too long. They released music from 2007-2011, and ‘Load Up the Bases (The Baseball Song)’ was one of them. The sports-themed tune features a cocky player predicting his home run hit before a game while detailing how much he loves baseball. The catchy song has been used in various advertisements for teams like the Atlanta Braves and the Colorado Rockies.

Pirates pitcher Doc Ellis served as inspiration for this self-reflective tune written by singer-songwriter Todd Snider. Snider was amazed Ellis once pitched a no-hitter while under the influence of illicit drugs and decided to write a song about it while relating it to his own struggles with addiction. He used the lyrics to also ponder his depression and wonder why he struggled with out-of-control emotions despite being a successful artist.

This early 90s UK rap song is a tribute to African-American athletes’ many contributions to the game of baseball. The lyrics mention several early legends like Leon Day and Alex Radcliffe. Many of the players mentioned in the song played in segregated leagues from the 1930s until the 60s when the sport was finally integrated.

Baseball player James Hunter pitched for New York, Oakland, and Kansas City in the 60s and 70s and his nickname was “Catfish.” Dylan co-wrote this tune with Jacques Levy about Hunter’s legacy. The song was written in 1976, the same year Hunter reached the impressive milestone of 200 game wins. The song wasn’t released until 1991 when it was included on a compilation album.

Related: Love the Big Apple? Then head on over to our playlist of songs about New York City.

Co-written by songwriters Randy Sharp and Marcus Hummon during their first ever session together, the duo takes a comedic approach to Hummon’s obsession with Nashville baseball team, the Sounds. At the time, the team had a diehard fan base that celebrated elaborately even if the final score only resulted in a tie. Alabama ultimately recorded it for their early 90s album by the same name, The Cheap Seats.

This Haggard rewrite is a playful rendition of his hit 1993 single, ‘That’s The Way Love Goes.’ This remake is a tribute to Rangers manager, Ron Washington. The title of the song is a famous quote spoken by Ron himself. It became a popular one-liner during the Ranger’s World Series run.

The Baseball Song’ appears on Smith’s ninth album, his first studio album with a major independent label. As an avid baseball fan and recognizing the game’s poetic relation to life itself, he wanted to write a song that encompassed baseball as a metaphor for living. Smith refers to himself as a “fan-made” artist, recording nine albums independently before signing on to Sugar Hill Records.

Part-serious, part-comedic, Steve Goodman wrote ‘A Dying Fan’s Last Request’ in 1981 just before a huge football players’ strike went underway. This tune wasn’t the only song Goodman wrote for the Chicago-based team. He also wrote the much-beloved ‘Go Cubs Go’ song. When he passed away from leukemia, some of his ashes were scattered at Wrigley Field in honor of his legacy.

Based on the Dodgers 1962 season, and the last several weeks of season-closing games known in baseball as the Pennant Race, Danny Kaye takes on the role of comedic storyteller for this fun tune. While the Pennant Race isn’t as significant as it once was due to championship games determining winners, instead of overall season wins and losses, this 1960s throwback tune is a great story highlighting vintage baseball.

This quirky song features two lovers who want to elope to get married, and many baseball references can be found throughout the lyrics. Using metaphors instead of the players’ actual names, Belle and Sebastian reference baseball legends like Willie Mays, Mike Piazza (a pitcher for the New York Mets), and Sandy Koufax. This song was featured in the hit indie film, Juno in 2008.

Related: Love the Big Apple? Then head on over to our playlist of songs about marriage.

Knock It out of the Park – Sam & Dave

Full of creative baseball metaphors, this upbeat song by R&B duo Sam & Dave also features a protagonist who is seriously crushing on a girl. While the lyrics can at times seem nonsensical, the rhythm and groove of the song make it a great one to play while starting your day. This popular duo performed together from 1961-1981.