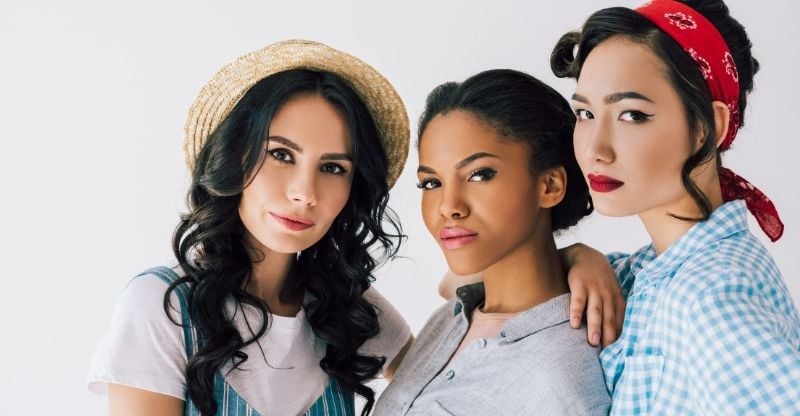 One constant source of inspiration for songwriters through the ages has been beauty – especially beautiful women.

From pop to rock to country and more, singers across all genres and genders have been writing songs that discuss the beauty of women for decades.

Here are some of the most famous songs about beautiful women that demonstrate how prevalent this theme has been throughout history. Remember, beauty is in the eye of the beholder 😉

The Most Beautiful Girl in the World – Prince

Prince suggests that a special someone could truly be “the most beautiful girl in the world” in this pop track, which was the artist’s first number one hit in the UK. It’s a beautiful, romantic ballad that was written for Mayte Garcia, who would become Prince’s fiancé soon after the song was written and released. Besides being a hit in the UK, ‘The Most Beautiful Girl in the World’ was hugely popular throughout the world.

Related: see our playlist of songs with ‘girl’ in the title.

This sweet and romantic track about appreciating a lady wearing red was written by Chris De Burgh after an argument with his wife, Diane. He was having trouble finishing the song until one day when he saw his partner looking lovely in red from across a crowded nightclub. The song isn’t about De Burgh’s wife as much as it’s about the importance of appreciating your significant other for who they are as the years go by.

Who Says – Selena Gomez & The Scene

Selena Gomez sings about a different kind of beauty than many of her fellow artists in this track, which was written with the aim of helping her young female fans feel better about themselves while living in the age of social media, self-esteem issues, and comparison. Gomez also inspires listeners to feel good about themselves and be unique individuals even when others try to bring them down or make them feel strange for standing out from the crowd.

Related: see our playlist of songs about believing in yourself.

This classic hit tells the story of a “Pretty woman, walkin’ down the street.” It was inspired by Roy Orbison’s wife, Claudette, who was going out shopping on the day that Orbison and fellow songwriter Bill Dees were trying to write a song. Orbison asked her if she needed any money before she left; Dees said that pretty women never need money, inspiring the starting line of the track. It was finished by the time that Claudette came home.

Related: this song appears on our list of timeless old love songs.

Lady Gaga uses the concept of a beautiful woman as a symbol of a harsh, party girl lifestyle in ‘Beautiful, Dirty, Rich.” Gaga has said that the song is based on her own life experiences as well as the lives of her friends while living in the gritty Lower East Side of New York City. She has also said that the song was written to inspire people to feel beautiful and rich, no matter who they are or where they live.

Toots & The Maytals sing of the pains and confusion that can come with loving or being attracted to a beautiful woman in this interesting Jamaican reggae track. The fictional woman in question seems to have an interest in ‘ugly men’ and act in questionable ways, which is at odds with her beautiful, ladylike appearance. This is an overall interesting track about how looks and style can be deceiving, especially where an enchantingly beautiful woman is concerned.

This powerful and haunting ballad encourages listeners to feel beautiful and confident, no matter what other people say about their appearances. It was released at a time when cyber-bullying and similar interpersonal concerns related to social media were on the rise. While many were confused by the conventionally beautiful Christina Aguilera’s decision to sing this song, she found that her own deep insecurities improved after performing it. Sometimes it’s the people who appear the most attractive on the outside that need the most help when it comes to loving themselves.

When You’re In Love With A Beautiful Woman – Dr Hook

Here’s a track that addresses the heartache, jealousy, and other emotional troubles that can plague someone who loves a beautiful woman that has many admirers. Songwriter Even Stevens followed producer Ron Haffkine into a studio bathroom to pitch the song—talk about dedication! This song’s country-pop/disco beats made it an instant hit during the disco craze that it was released in; the track charted in the US and the UK after it hit the airwaves in 1979.

Eric Clapton wrote ‘Wonderful Tonight’ as a biographical track about waiting for future wife Pattie Boyd to get dressed for a Buddy Holly tribute organized by friend Paul McCartney. This gentle, romantic hit about loving how your significant other looks is just one of several tracks that was inspired by Boyd—Clapton wrote at least three songs about her, while former husband George Harrison also wrote a few tracks with her as the inspiration behind them.

Related: this appears on our songs about soulmates playlist.

While this song is often interpreted as a sweet love song, James Blunt actually wrote it about a desperate stalker watching his ex-girlfriend and her new lover on a subway train. The track was inspired by Blunt’s ex-girlfriend Dixie Chassay, though it’s not clear if the subway encounter is a true story or not. In any case, the end of the song veers toward the topic of moving on from an obsession, which makes the track a bit more inspiring.

This Sean Kingston hit—which was designed to work around the bassline riff from the classic song ‘Stand By Me’ by Ben E. King—is written from the perspective of a teenage boy after breaking up with his beautiful girlfriend that just broke his heart. It highlights that beauty isn’t everything, and can even cause some individuals to feel high and mighty, causing heartache for their romantic interests. Kingston has said that the track was inspired by his own three-year relationship with an ex.

‘Just The Way You Are’ was the lead single and first musical release from Bruno Mars’ debut album, Doo-Wops & Hooligans. Its sweet lyrics revolve around helping an insecure partner see her own beauty and implore her not to change herself in any way. The hit single has been certified thirteen times platinum in the United States among hitting other wildly impressive milestones worldwide. Perhaps its earnestness and romantic themes are simply that appealing and relatable to audiences.

Related: see our songs about crushes list for this song and more.

Beautiful to Me – Olly Murs

Olly Murs sings about a significant other who feels self-conscious about her appearance and doesn’t see her own beauty in this track. He implores her not to change anything about herself and avoid covering up her so-called imperfections. A music video was filmed for the track, but Murs was only able to make a small cameo appearance in it, as he was on tour during filming. The track inspired two remixes but only charted at the 98th position in the UK.