16 Great Songs about Being 19 Years Old 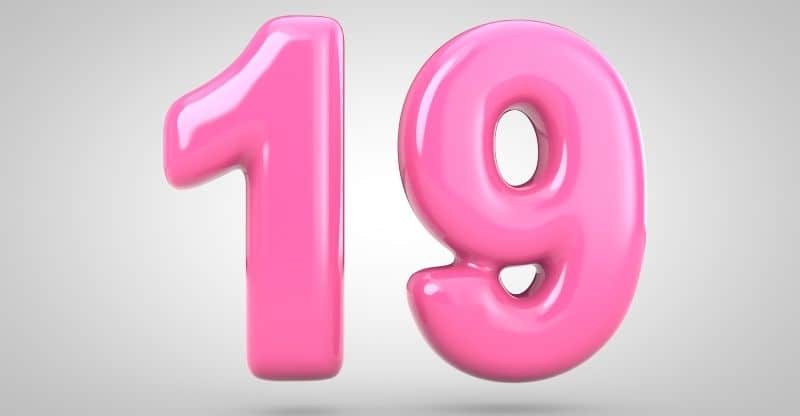 Being nineteen years old is a significant turning point in everyone’s life. There’s pressure to make your last teen year memorable while also being stressed about starting your twenties. Teenage years are full of fun, memories, but also life lessons. Your final year as a teenager is sure a special one, so we decided to make you a playlist filled with songs about being 19 that will add some magic to your late teens.

Teenage years and having fun often makes us forget that this period won’t last forever. The day comes when you realize being young, crazy, and free is a part of your past. This upbeat country song tells a story of a woman reminiscing her teenage years. She sings about all the fun she had when she was younger, as she wishes to keep that lifestyle forever.

Yes, your teenage years can be some of the wildest and most exciting years of your life, but they often carry a lot of life lessons that you learn the hard way. ‘Dear John’ is about a short relationship between Taylor Swift and a 10 years older John Mayer. The singer addresses her ex-boyfriend, calling him out for manipulating her when she was only 19. Imagine the whole world thinking you’re this bad of a boyfriend? Yikes.

I Was Only Nineteen – Redgum

Reading our title, most of you probably thought about songs that sing about being young, wild, and free. Our next song’s thematic, however, is a bit more serious. ‘I Was Only Nineteen’ is a tribute to Australia’s Vietnam Veterans. Written in the first person, the song shows what most Australian soldiers experienced in the war – from training and combats to returning home and dealing with psychological scars.

Relationships with big age differences can seem like a good idea at first, but over time these couples can face a lot of challenges – this song tells us one such story. In ‘Hey Nineteen,’ an older man who’s dating a 19-year-old girl realizes they don’t have much in common as he learns how little she knows about the music of his period. Sometimes, physical attraction is simply not enough.

Living a life of a party animal seems fun to a lot of people, but is it really a key to happiness? Young Lorde tells us what this kind of a lifestyle brought to her. In ‘Perfect Places,’ the singer admits to using partying to cover how deeply unhappy she was. Although losing yourself in things that will make you feel good for a brief moment might seem like a good idea, it’s not a long-term solution.

Written by Tegan Quin and covered by Hayley Williams, the song explores a young and idealized love. Here’s a pro tip: don’t romanticize someone you don’t know. ‘Nineteen’ tells a story of a girl who created a glamorized idea of her partner long before she even met them. The perfect image she had in her mind helped her fall in love fast, but it also left her feeling hurt in the end. Are we surprised?

Becoming worldwide famous almost overnight can be a lot to deal with for a teenager. Unfortunately, a lot of young stars turn to drugs as a way to cope. Juice WRLD tells us how it was for him to live under the spotlight during the most vulnerable years of his life. Although he became wealthy and independent at a young age, this kind of upbringing wasn’t as perfect as it seems.

Being 19 and rich seems like a dream when you’re that age, but it’s probably not the best and safest idea…no, it definitely isn’t. With a great amount of money comes great responsibility, and giving it to a teenager might be something you should reconsider. Richman (no pun intended) sings of all the trouble the narrator of the song went through as a rich kid in Naples.

Anything You Want – Spoon

Outgrowing your partner is a common issue in long-term relationships, especially ones that started when the couple was very young. Sometimes, you just feel like you deserve more, and that’s okay. The singer openly admitted that ‘Anything You Want’ is about his ex-girlfriend. The singer feels as if she hasn’t changed since she was 19, and that he’s starting to feel pretty lonely when he’s with her. We’d say that’s a pretty good sign to move on.

There comes a time when you simply have to speak out about all that you were holding in for years, and life becomes a little easier after you do so. Your inner child finally breathes. Our singer describes the burning passion he feels in his heart to speak about what’s been troubling him for years. Miranda admitted that he had a terrible relationship with his father, and this song is his way of saying what he never could as a kid.

Feeling lonely and empty can lead to finding some bad coping habits, such as drinking or excess partying. Has that ever ended well? For anyone? In ‘Coxton Yard,’ the narrator questions whether drinking and ‘draining out your insides’ is really what’s supposed to make you feel alive at the young age of nineteen? As he watches the train pass by, it reminds him that he’s not the only one who feels lost and alone.

Not Nineteen Forever – The Courteeners

We all dream of staying forever young, but that’s all it is – a dream. After all, you have to get bored of all those nights out and bad hook-ups one day, right? This song describes an encounter between an older woman and a younger man who had just met. After spending some time together, the woman was far from impressed by his lifestyle. Some people try really hard to stay young forever, huh.

Once And Never Again – The Long Blondes

It’s often hard to see just how bad things really are when you’re in the middle of it all. Once you realize, however, it might be too late… ‘Once and Never Again’ tells a story of a girl in an abusive relationship. The song reminds her that she’s young and has a lot more to experience in life if she left the man who’s hurting her. If you’re going through a similar thing, we hope this song can be your wake-up call.

There’s something so sweet about someone who’s a free spirit not afraid to live their life unapologetically. They make you feel free, don’t they? ‘Kilby Girl’ is just like that – she’s young and wild, yet there’s something mysterious about her. Our singer simply can’t resist spending time with her, and we totally get it.

Don’t Like Who I Was Then – The Wonder Years

Going back to your teenage years with a mind of an adult and thinking about some critical moments that happened can be eye-opening. In this song, Dan appreciates his growing maturity. This song is all about embracing your past mistakes. The singer encourages his younger self and his listeners to take risks and not be afraid to mess up.

Every playlist needs a song that will strike you straight in the heart, and we’ve got one that can hardly leave anyone indifferent. ‘Twinkle Lights’ captures the singer’s personal story of being sexually assaulted. Writing this song was a way for her to cope and heal, and we hope it will find the hearts of those who need it and heal their scars just like it helped heal hers.