21 Songs about Being Broke and Having Financial Struggles 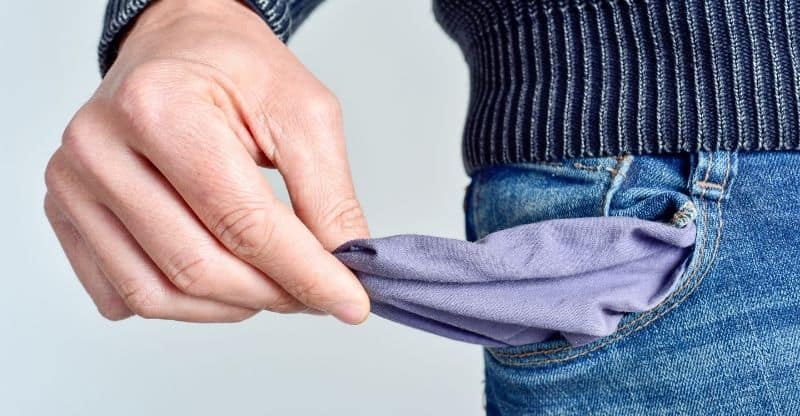 Are you facing financial struggles? Out of money? Dead broke? While these songs won’t fix your problems, they may give you some respite and remind you that you’re not alone.

Because here’s the thing: many of us have been in your shoes. Including a surprising number of musicians (the music industry is full of rags to riches stories.)

So, without further ado, here are some of the best songs about being broke ever written. Better days are coming. Hang in there.

Nobody Knows You When You’re Down and Out – Eric Clapton

With fame and wealth comes a lot of people who disguise themselves as your true friends, loving you not for who you are, but for what you have. But, when hard times come, who’s by your side? In ‘Nobody Knows You When You’re Down and Out,’ the singer remembers living the life of a millionaire, sharing his riches with his friends. However, once hard times come, his so-called friends are nowhere to be found. Charming!

I Need a Dollar – Aloe Blacc

Sometimes, losing your job can be the best thing that could’ve happened to you, no matter how scary it might seem at the time. After losing his job as a business consultant, Aloe Blacc decided to focus on his music until he got a new one. That’s when he wrote ‘I Need a Dollar’ which became an instant hit – it did so well, he never needed a job again. Some things really do happen for a reason.

Here we find Dylan requesting some leniency from his landlord (“My burden is heavy, my dreams are beyond control”). Dylan had some legal wrangling going on with his manager Al Grossman at the time, and it’s generally believed the song was written about that. Subconsciously perhaps, because when this was pointed out to Dylan, he replied “Well, maybe it could’ve been.”

Drowning your sorrows with alcohol is a popular coping mechanism and a widely used theme in many songs, this one included. ‘Liquor Store Blues’ follows a story of a man fed up with his job and the way he’s been living his life, so he finds relief in a local liquor store. If some of you are struggling the same way, don’t forget – this too shall pass.

Experiencing money issues is something most of us struggle with from time to time, but the narrator in ‘Busted’ has it really bad. The 1963 Grammy-winning blues number tells a story of a poor farmer who struggles to feed his family. After he asks his brother for help, he realizes they’re both in the same situation. Next time you’re feeling sad because you can’t afford something, think of this song. We guarantee you’ll feel better.

Get your tissues ready, it’s time for a moving ballad that this playlist simply couldn’t go without. Inspired by the band’s own financial issues, ‘Mr. Banker’ tells a touching story of a struggling man. This beautiful tale follows a son who’s pleading for the bank to help him bury his father so he can rest in peace, offering them the last thing he has – his guitar: “I got me a 1950 Les Paul guitar, won’t you take it mister banker, won’t you bury my papa for me” he sings.

No one deserves a song more than working men who are slaving away to feed their families and survive. ‘The Downeaster Alexa’ is a folk song about Long Island fishermen, struggling to make ends meet as they fight through things that are out of their control. Being a native Long Islander and someone who’s in love with the sea, this song is very personal to our singer.

Unfortunately, we live in a world where rich people have a lot more privilege than those of lower social and financial status. Sometimes, those differences can mean life or death, as was the case during the Vietnam War. In this song, the singer puts himself in a position of a less privileged man who’s getting drafted into the military. His high-profile peers (rich kids), however, were much more fortunate.

Life in the ghetto is a common theme in rap music. Growing up in such an environment often leaves long-term effects, no matter how far an individual comes in life. Jay-Z is a perfect example of someone who came from the ‘hood’ and climbed his way to the top, and he sings about his experience in ‘Hard Knock Life’. In the song, he compares his days on the streets to his current life of luxury.

Eminem’s rough childhood is no secret. Unfortunately for him, family issues continued in his adulthood as well, which inspired ‘Mockingbird’. In one of his most personal tracks, the rapper addresses his daughters. The song can be seen as an apology for the way their lives turned out, as his marriage with their mother fell apart. It’s no surprise that this is one of the rapper’s most influential songs, and it definitely deserves a place on our list.

For the First Time – The Script

Often it’s the tough periods that bring you closer. And so it is here. This song tells the story of a young couple affected by a financial crisis, but the hard times help them connect on a deeper level (“but we’re gonna start by drinking old cheap bottles of wine, sit talking up all night”.)

Originally written in 1929 after the stock market crash, Springsteen put his own twist to the song. His version of the track describes the devastating effects Hurricane Katrina had on New Orleans. The song shows his disapproval of the government’s negligence – those below the poverty line were less fortunate than those of a higher status, as most of them were left with no help, which resulted in a large number of deaths.

Related: check out our playlist of hurricane-related songs.

Nothing better than a good old story-telling track, and how could a playlist like this one go without such a song. ‘Mr. Wendal’ was inspired by the singer’s experiences in his home city, where he became friends with homeless people. The song teaches us about the life lessons you can learn from interacting with those less fortunate, as it reminds us they’re still human. After listening to this song, maybe you won’t simply turn away the next time you’re asked for a dime.

A bit different from what the audiences were used to from The Kinks, the song depicts the hopelessness of the lower classes. In the pre-chorus, the singer asks “what are we living for?,” as he believes the Swinging Sixties were nothing but a facade. The times were rough for those who were struggling to make ends meet, and ‘Dead End Street’ is a song dedicated to them.

Many often mistake the pursuit of happiness for the pursuit of wealth, as they believe money will bring them the luxury of contentment. Our next song is a blues tune about this illusion of consumerist ideals, and how people relate self-worth to material things. There’s no one better to poke fun at consumerism than a hippie icon herself, Janis Joplin.

Related: see our playlist of songs about cars.

If we’re to believe this song, it seems Bob Dylan’s initial stay in New York City wasn’t all wine and roses. Based on ‘Down on Penny’s Farm’ (recorded by The Bently Boys), the song shows the hardships of living in the big smoke. Although the original song’s setting is a rural one, Dylan keeps the original mood of the track, but sets it in a more urban environment.

Related: see our playlist of songs about cities.

Can You Spare a Dime – Bing Crosby

Considered one of the first protest songs, ‘Brother, Can You Spare a Dime’ was the anthem of the Great Depression of the 1930s. The song hit home for many people at that time, as it was a period of homelessness, joblessness, and a loss of morale. The track follows a story of a man who put his life into building a nation by working his fingers to the bone but still finds himself in bread lines begging for help to survive.

No Woman, No Cry – Bob Marley

Although many interpret the title as ‘if you don’t have a woman, there’s no reason to cry’, in reality, it’s the exact opposite. The song celebrates the power of women, and the title itself means ‘woman, don’t cry’. In one of his most popular songs, Marley remembers the childhood he spent in poverty, as he reminds a woman in his life, possibly his mother, of nice memories they’ve made.

Pulp’s breakthrough hit, ‘Common People’, was inspired by the singer’s high-class friend wanting to “live like common people”. Coming from a working-class family, the idea of wealthy people trying to blend in as a sort of cultural experiment irked the singer which he used as inspiration for this song.

Related: check out our list of songs about underdogs.

Livin’ on a Prayer – Bon Jovi

Everyone and their mother knows Bon Jovi’s signature song, ‘Livin’ On a Prayer’, but have you ever thought about the meaning behind it? The 1986 rock anthem tells a story of a working-class couple struggling to make ends meet, yet they decide to hold on to what they’ve got. Some of the bandmates had a tough upbringing, making this a partly autobiographical song.

Another Day in Paradise – Phil Collins

When you first read the title of the song, the last thing you’d think about is the theme it actually deals with. The lyrics of this Grammy-winning track talk about the issue of homelessness. The singer encourages us to stop ignoring the pleas for help of the homeless, as we might be their only hope. It just reminds us that one person’s paradise is another person’s hell. Makes you think, don’t it.