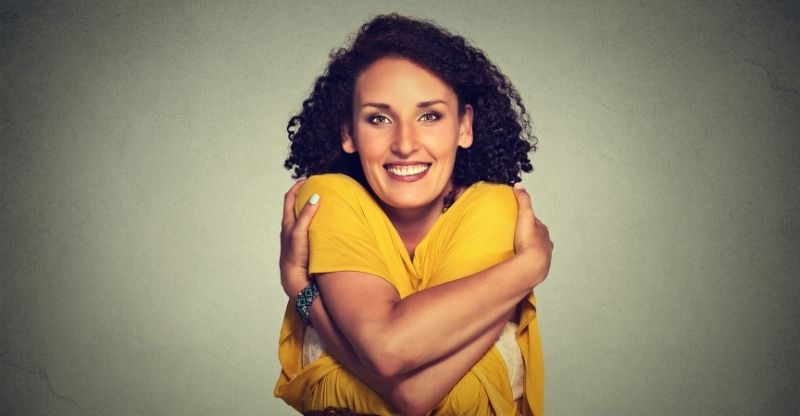 Life is about coming to terms with who you are and being proud of it.

Many people put up various fronts (or ‘masks’) to disguise the people they really are. It’s a defense mechanism to stop them from getting hurt, and an attempt to cover up things they don’t like about themselves.

But what if we stop caring so much about other people’s opinions and start being proud of who we are, despite what others may think?

So, here are some of our favorite songs about being yourself. They will give you the courage to embrace who you are and find some much-needed self-love.

Besides, as the great writer Oscar Wilde once said, “Be yourself. Everyone else is already taken.”

‘This is Me’ – The Greatest Showman Cast

Here’s a rousing song about self-worth, regardless of what you look like.

It was written by Hawaii-born Keala Settle, who plays the bearded lady, Lettie Lutz, in the movie (based on the real Annie Jones Elliot, a regular at Barnum’s Greatest Show on Earth circus).

If this doesn’t make the hairs on the back of your neck stand up, nothing will!

Lady Gaga wanted to write a “this-is-who-the-f**k-I-am anthem,” as she put it. The result was one of the best songs about loving yourself in the whole of pop music.

She allegedly wrote it in just ten minutes and compared the process to the Immaculate Conception. The song has a “magical message,” she said in an interview.

The song reminds you to be your own biggest fan. “Don’t hide yourself in regret, just love yourself and you’re set.”

‘Come as You Are’ – Nirvana

Here’s a great song about being yourself and doing away with all the pretenses. It’s a song about tolerating people that was way ahead of its time. It appeared on their classic album, ‘Nevermind’ (with its classic album cover or a baby underwater reaching for a dollar bill).

“Come doused in mud, soaked in bleach, as I want you to be.”

‘By Yourself’ – Ty Dolla $ign feat. Jhené Aiko and Mustard

In a Rolling Stone interview, Ty Dolla $ign called this song an “ode to all the amazing women, especially all the single women and the single mothers, who do this thing called life on their own.”

It reminds us not to be afraid of being you.” Say you ain’t afraid to be by yourself”

Few songs get a room full of people singing along like this one (hence why it’s such a popular karaoke song to sing). ‘My Way’ is a song that celebrates individuality and aspiration, and there’s probably no bigger finish than the crescendo of this song (it’s massive).

“For what is a man, what has he got, if not himself, then he has naught.”

There’s also a fun connection between this song and Bowie’s ‘Life on Mars’ that we discuss in our list of popular songs about life.

‘An Englishman in New York’ – Sting

This one is about embracing the quirks that the country you’re from has given you. It’s actually about gay author Quentin Crisp who moved to New York in the ’80s and felt like an outcast (he appears in the video.)

“Be yourself no matter what they say.”

Also, check out Sting’s ‘If You Want Someone, Set Them Free,’ a song featured on our list of songs about letting someone go.

You know the expression “life is no dress rehearsal”?

Well, that’s the point of this brilliant bit of rap. This adrenaline ride is one of the best songs about being brave ever. It takes you by the scruff of your hoodie, sticks the mic in your hand, and tells you, ‘this is your chance to be you, go take it.’

“The moment, you own it, you better never let it go.”

This song of freedom is the perfect mantra for anyone who wants to forge their path. You are free to be whatever you choose, whatever anyone else says, or whether you measure up to society’s standards.

“I’m free to be whatever I, whatever I choose and I’ll sing the blues if I want.”

In a gesture of solidarity, singer Tim Booth invites others who have been depressed, down-trodden, or brought to their knees by life, to join him.

Those who “feel the breath of sadness”, “touched by madness”, or “find themselves ridiculous” can “sit down next to me”.

Back in the early ’90s, when this song was huge, people used to sit down on the dance floor during this song!

This anthem is about female empowerment. Here, the Queen of Pop tells women, “don’t go for second best.”

Don’t be won over by “fast cars,” “diamond rings,” or “eighteen karat gold” if he’s doesn’t love you or you’re in a toxic relationship.)

“If you don’t say what you want,” she explains in her book Madonna in Her Own Words, “then you’re not going to get it.”

‘Within You Without You’ – The Beatles

Let’s get even more profound for a moment. This song by George Harrison is about self-discovery and finding answers inside us, rather than through the myriad of distractions we face in the outside world (even more so today with social media and the 24-hour news cycle).

“When you’ve seen beyond yourself, then you may find peace of mind is waiting there.”

If you like this, check out ‘Give Me Love’ from our peace songs compilation, another fine composition of his.

Of course, being yourself may require some more significant changes. This could entail breaking up with a lover if you’re in a bad relationship, especially if your partner can’t accept the person you are (or have become during the relationship).

“You don’t need to discuss much, just drop off the key, Lee, and get yourself free.”

For more Paul Simon, check out’ Me And Julio Down By the Schoolyard’ from our songs with whistling playlist.

‘Who Says’ – Selena Gomez & The Scene

Unfortunately, with all the good from the internet and social media, young people (especially) can easily get humiliated and bullied online. It’s a song about self acceptance and was written to fire back at these haters and cyber-bullies who revel in making other people’s lives hell.

“You’ve got every right, to a beautiful life, come on.”

Here’s a message about self-love from a woman’s perspective (not in an egotistical way, but about being nice to yourself).

“Curl your hair, run the extra mile, keep it slim, so they like you,” she sings in the opening verse. Sometimes you can be your own worst critic.

But, she affirms, “you don’t have to change a single thing.”

She told Billboard that the song was borne out of “personal insecurities, imperfections, and self-confidence issues.”

This song from the band Jimmy Eat World was a runaway hit in the early 2000s and has one of the most straightforward messages of all these songs. Namely, that “it doesn’t matter if it’s good enough for someone else.” If you like it, then that’s good enough.

All of this is made up, anyway. “It’s only in your head you feel left out or looked down on,” he sings.

This self-help ballad features the line: “Don’t lose who you are in the blur of the stars.” She loved the line so much that she had it tattooed on her hip.

However, the sentence passed to the tattoo artist was incorrect (she wrote ‘loose’ instead of ‘lose’), so it reads: “don’t loose who you are in the blur of the star.” Oops!

“Tears don’t mean you’re losing, everybody’s bruising, just be true to who you are.”

Most of us have some inner demons and issues with self-esteem. As is evident in this song, Sara Bareilles is no exception.

In this song about being comfortable in your own skin, she asserts, “say what you wanna say, and let the words fall out, honestly I wanna see you be brave.”

‘The Revolution Will Not Be Televised’ – Gil Scott-Heron

The theme of this article is all about self-empowerment. Of course, that can take many forms, but one thing we haven’t touched on is racial empowerment.

Well before the advent of hip hop and rap, Gil Scott-Heron was spitting truth to whoever was willing to hear it. This is his wake-up call to black brothers and sisters to stop being brainwashed by TV and come together.

More ‘Be Yourself’ Songs