18 Great Songs about Believing in Yourself and Your Own Abilities 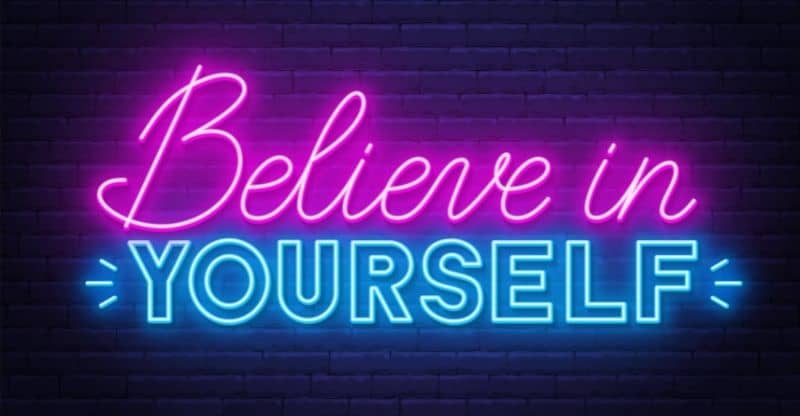 It’s not always easy to believe in oneself. Living in a world that’s full of challenges and outside pressures can cause even the most self-assured of people to question their abilities from time to time.

Fortunately, sometimes the right song is all it takes to help you feel strong once again. So here are some of the most inspirational songs about believing in yourself from artists who know how to make a listener feel confident.

‘You’re Gonna Be Okay’ is an inspiring song about never giving up on life, even when it feels like your future is as dark as it can get. Jenn Johnson was inspired to write this song after her own husband, Brian, experienced a nervous breakdown, giving the track a personal feeling that makes it all the more powerful. As Johnson sings, there’s never any reason to give up on yourself, because “You never know just what tomorrow holds.”

Who Says – Selena Gomez & The Scene

Selena Gomez sings an empowering song that encourages listeners – especially young female ones navigating school, first love, and friendship drama – that feel compelled to follow the crowd rather than allow their individuality to shine through in all they do. It also serves as a message to naysayers who encourage others to change themselves. This track has an acoustic sound that makes it earnest and pure, giving Gomez’s vocals an authentic feel that allows the listener to trust her advice.

Sometimes, what should be the most natural act of being oneself ends up being one of the bravest acts of all. Colbie Caillat encourages listeners to believe in their own natural beauty and worth in this track. She explained to Billboard that this song was inspired by her own struggles with self-confidence – triggered by inner and outer influences – and that she wanted to inspire other men and women who felt similar insecurities to love themselves just as they are.

Related: see our playlist of songs about insecurity.

Taylor Swift and fellow singer Brendon Urie convince their lovers of their value in this hit. This turns the idea of believing in yourself on its head, with protagonists who already understand their own worth. It does a fantastic job of encouraging listeners to spend time with romantic interests who understand the value that complementary partners can bring to a relationship. It also highlights the uniqueness of each individual and how important it is to embrace that uniqueness.

This lovely and powerful track tells a story of continuing to fight against your personal challenges even after life has taken one too many tolls on your confidence and energy levels. It also points out how helpful it can be to have someone by your side to help you feel stronger and more optimistic through life’s disappointments and struggles. As Andra Day sings, “All we need, all we need is hope/And for that we have each other.”

Breakups – particularly ones that involve supremely hurtful partners – can cause people’s self-esteem levels to reach new lows, even if the individuals in question were highly confident people to begin with. Kelly Clarkson encourages listeners to feel stronger rather than weaker after losing a destructive partner. She speaks directly to such an ex-love, stating “You know in the end the day you left was just my beginning.” This track was inspired by the classic Friedrich Nietzsche quote “That which does not kill us makes us stronger.”

The Voice Within – Christina Aguilera

Christina Aguilera directly tells the protagonist of this song, a young girl, to look within herself for strength, courage, and hope when all feels lost. She also encourages the subject to find self-confidence no matter what the world at large or other people are saying to her or trying to make her feel like. Aguilera wrote the track when she was quite young and felt unsure of herself as far as her self-image and the direction of her career were concerned.

You Can Get If You Really Want – Jimmy Cliff

Everyone needs a motivational pep talk now and then. This reggae track serves as such a pep talk, letting the listener know that you can get what you want as long as you work toward your goals and have patience. It is the perfect song for those days when you feel like giving up on your dreams and just need that gentle push to keep going and working toward greatness. It has been covered by a wide range of artists due to its inspiring theme.

Journey tells the story of people who are trying to create new lives for themselves so they can follow their wildest dreams. This song sends an important message to listeners, reminding them not to give up on their most precious dreams, even if they seem too big to achieve. This much-loved tune has always been famous for its unusual structure, where the pre-chorus and chorus are not introduced until the latter half of the track.

Rachel Platten serves as this song’s protagonist, proclaiming that it is her “fight song/Take back my life song/Prove I’m alright song.” What’s fascinating about this wildly popular track is that it did, indeed, become Platten’s fight song, as it provided her with chart-topping success after ten-plus years of creating music to little fanfare as an unsigned artist. Her frustrations with coming to a seeming standstill in her career were also the original inspiration for the song’s motivational theme.

Related: see our playlist of songs about fighting.

It sometimes takes a unique type of bravery to stand up for yourself and say what’s on your mind. Sara Bareilles encourages the listener to “say what you want to say/and let the words fall out” in this rousing hit. She focuses especially on facing one’s most feared enemies as a common human concern that can be overcome with bravery and self-confidence. The song’s uplifting beats help to inspire confidence in even the most unsure of listeners.

Eminem spins a tale about facing your nervousness as a musician, but this track’s message about the importance of believing in yourself is relevant in a larger sense, as well. The rapper wrote the song with the express purpose of telling his life story through the eyes of the fictional protagonist in his first film, 8 Mile. This song is unique to the rap genre in that its power chords are played on a guitar.

The frustration of holding your emotions and thoughts in and not being your true, authentic self can become overwhelming at times. Sometimes this overwhelm leads to something powerful in the end. Katy Perry discusses a similar struggle in this empowering pop hit, which was inspired by her divorce from Russell Brand and the moments of self-discovery that came with it. This track was a worldwide success, reaching Number One in 15 countries after its release.

Sometimes the purely relatable lyrics of a song are what make it magical. Shania Twain lets out her frustrations with even the smallest of life’s disappointments in this country-rock track. However, the song is a positive one overall, reminding listeners that when your life seems to be at its lowest point, things can only start looking up. Things always have the potential to get better, so why not look at the brighter side of life?

This Is Me – The Greatest Showman

This show tune – much like The Greatest Showman itself – promotes being unapologetically and proudly yourself, no matter how others think of or respond to you. The song allows the Barnum circus “freaks” in the film to break free from their insecurities – if only for a few precious minutes – and be proud of their unique, authentic selves after facing discrimination. The characters, their scene, and this song inspire the audience to celebrate diversity, self-love, and individuality in a spirited and joyful way.

If anyone understands the struggles of being a human, it’s Demi Lovato. This track shows that understanding all too well, addressing the pain and scars that a heartwrenching breakup can cause – as well as the strength that can come out of such a traumatic situation. Lovato declares that “All the pain and the truth/I wear like a battle wound.” Something beautiful and powerful often arises out of what looks to be a hopeless and unfair event.

Miley Cyrus sings a unique song in that it addresses the fact that our lives are filled with challenge after challenge that must be overcome with confidence and a certain level of optimism. The title alone demonstrates how important it is to celebrate and appreciate the challenges themselves for what they are and how they shape us into better, wiser individuals. This was one of Cyrus’s first country tracks and the first single from the soundtrack for her film Hannah Montana: The Movie.

Keep Your Head Up – Andy Grammer

When life’s struggles and worries pile up, it can be easy to lose one’s confidence. Andy Grammer’s inspiring anthem encourages listeners to look on the bright side and keep trying, even when it feels like they’re facing insurmountable burdens. This track served as Grammer’s big breakthrough into the music industry and launched a successful career full of pop hits – which is interesting considering the singer-songwriter created the song to motivate himself to keep pushing forward when his career wasn’t taking off.