19 Best Songs about Books for All You Bookworms 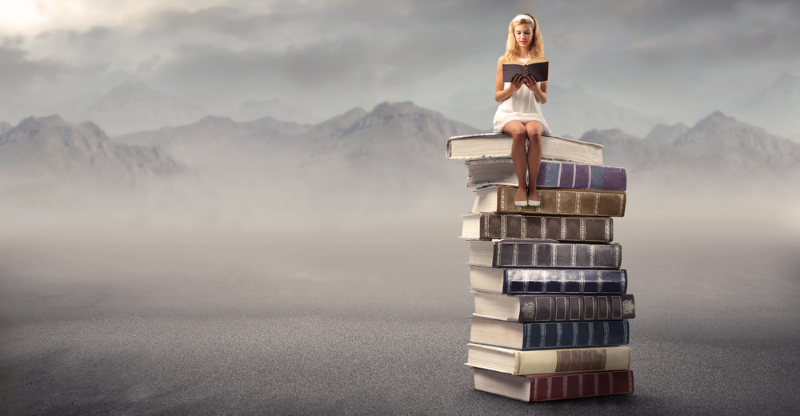 Songwriters are influenced and inspired by literary works just as much as musical works. Bands such as The Beatles and Led Zeppelin, and artists like David Bowie penned many hit songs dedicated to some of their favorite books. In this list, you’ll find references to literary classics like Wuthering Heights and 1984, and tributes to poets such as Edgar Allen Poe. If you’re a fellow bookworm, you’ll love this playlist featuring songs about books.

Before Taylor Swift released her musical retelling of Shakespeare’s classic Romeo and Juliet via her hit song ‘Love Story,’ songwriter Kate Bush released ‘Wuthering Heights’ on her album The Kick Inside in 1978. Bush uses the song to reimagine the emotional romance of main characters Heathcliff and Catherine in the classic novel Wuthering Heights by Emily Bronte.

In the 70s, a musical adaptation of George Orwell’s futuristic-dystopian classic novel 1984 was in the works. Songwriter David Bowie was busy developing his “plastic soul” sound and jumped at the opportunity to write the music for the play. Though the play would never come to fruition, Bowie included the title track for the play on his album, Diamond Dogs.

Lucy in the Sky With Diamonds – The Beatles

John Lennon’s son Julian brought home a picture from class that he drew which inspired the title of this Beatle’s hit. ‘Lucy in The Sky with Diamonds’ was the title Julian gave to his drawing, a sketch of one of his classmates. Lennon ran with the title and used imagery from Alice In Wonderland sequel Through The Looking-Glass to serve as inspiration for the verses of the song.

Band member and songwriter Robert Plant’s admiration for Lord of the Rings writer J.R.R. Tolkien is well-known. ‘Ramble On’ contains quite a few references to Tolkien’s book series. He would later admit he was embarassed about it because the song’s references aren’t in keeping with Tolkien’s story. Though this was a popular song, Led Zeppelin never played the song from beginning to end live as a band.

Holden Caufield is the main character in J.D. Salinger’s book, The Catcher In The Rye. It’s overarching theme deals with disaffected youth. Surprisingly, when tasked with reading it in high school, Green Day frontman Billi Joe Armstrong hated reading it. Later on however, he revisited it due to its “punk rock” themes and developed a new appreciation for the American classic.

This Nirvana collaboration was inspired by the dark novel, Perfume, written by Patrick Suskind in which an apprentice at a perfume shop begins taking women’s lives for their scents (the apprentice has a keen sense of smell, but no smell of his own). All three members of Nirvana are credited with writing this track. A nine minute version is included on one of their compilation CDs.

Don’t Stand So Close To Me – The Police

The Police frontman Sting wrote this secret love song about one of the most controversial novels of all time, Lolita by Russian author Vladimir Nabokov. The story revolves around an older man’s infatuation with a young girl. Before joining The Police, Sting was a teacher. When the song came out there was speculation it was autobiographical until he set the record straight. In the UK, this was the best-selling song of 1980.

China in Your Hand – T’Pau

Lead singer Carole Decker watched a documentary on Frankenstein author Mary Shelley and other poopular writers during Shelley’s time. Though Shelley was younger, she outsold many of her writer friends after the release of her gothic novel. This created a lot of resentment in both her marriage to fellow writer Percy Bysshe Shelley and other professionals. The song echos Shelley’s story and a line from the book, “Don’t push too hard, your dreams are china in your hand.”

Wrapped Up in Books – Belle and Sebastian

Detailing two lovers’ intimate thoughts about each other and where they are headed, Belle and Sebastian draw on literary metaphors to tell this demure, romantic story. Nods to poet Robert Frost’s The Road Not Taken are tucked away in the lyrical story. Literary genres like fantasy are also referenced to represent the wishful thinking of the characters in the song.

Paul McCartney wrote this tune with the writing industry as a whole in mind. He had just finished helping set up the Indica bookstore, and bandmate John Lennon had two published books under his belt. The idea behind the song is a writer pitching a publisher a story idea. Paperback books were once considered of lower quality than hard copies because they were written for mass consumption. Thus, in the song about a profession, it is insinuated the author isn’t all that great.

A metaphorical story of friendship, Arkells’ tune ‘Book Club’ reveals how “women and music” can help two people bond. Lyrics from the song talk about two friends trading so many books they felt like a library, driving around listening to music, and growing up with all of these artistic influences greatly affecting their life into adulthood.

MC Lars tackles the complicated world of poetic meter with this rap, referencing writers like Poe and Shakespeare who had a particularly melodic feel to their writing. The rapper goes over definitions for phrases and words like iambic pentameter and tetrameter, and relates them to how he flows when he’s on the mic. The song is a great lesson, and represents the poetic nature of spoen word and rap that often gets overlooked.

The Book I Read – Talking Heads

This quirky tune takes on a double-meaning when you listen to the lyrics. Told from the perspective of a man who’s fallen in love, the listener is left to wonder as he analyzes the lines if it’s a person he’s fallen in love, a book, or both. Take a listen to Talking Head’s ‘The Book I Read’ and see what you think it’s about.

Venus in Furs – The Velvet Underground

Rock band The Velvet Underground often loved recording music that would shock listeners, and ‘Venus in Furs’ did just that. Written in honor of an illicit novel popular with the counter-culture at the time, it brings together taboo subject matter meant to stir up buttoned-up audiences at the time of its release in the late 60s.

Space exploration was huge during the release of Elton John’s ‘Rocket Man.’ Naturally, due to its title and space-themed lyrics, many assumed songwriter Bernie Taupin was inspired by the timely Apollo missions. However, Taupin wrote the lyrics for ‘Rocket Man’ after reading sci-fi writer Ray Bradbury’s short story. The Rocket Man. The short story tells the tale of the emotional departure of a father who is an astronaut being sent on a mission into space.

Two Ramones songs appeared in the 1989 movie Pet Cemetary, a film adaptation of Stephen King’s popular, eerie novel by the same name. Aside from the Ramone’s ‘Pet Cemetary,’ their tune ‘Sheena is a Punk Rocker’ also made it into the soundtrack for the film. Though they didn’t get much airplay at first on MTV, their creepy music videos caught the channel’s attention and they began featuring the band more.

Related: This features on our list of Halloween songs.

Anthony Kiedis’ lyrics for their song dedicated to the Dr. Suess book came directly from the book itself. Drawing on lines from the story, the moral is that all creatures should be free. Dr. Suess wrote the book in a post-WWII era still reeling from the fallout of several despotic rulers. Dr, Seuss stories didn’t just rhyme, they had a specific poetic style to them known as “meter.” In his case, he wrote in anapestic tetrameter.

The Book Of Love – Peter Gabriel

Often used as a wedding song over the years, ‘The Book of Love’ is different from much of what Gabriel has previously recorded. It’s a deeply romantic tune that creates a bridge between the long journey of love between two people and the metaphorical book they write over the years while together.

Related: This brilliant piece appears on our playlist of romantic songs.

Blue Oyster Cult band member Eric Bloom developed a close relationship with science fiction writer Michael Moorcock which had a large impact on Bloom’s songwriting. ‘Black Blade’ is inspired by one of Moorcock’s fictional characters who carried around a large sword that got stronger as it took lives. Bloom and Moorcock became so close, the sci-fi writer helped Bloom write lyrics by snail mail correspondence in the 70s and 80s.