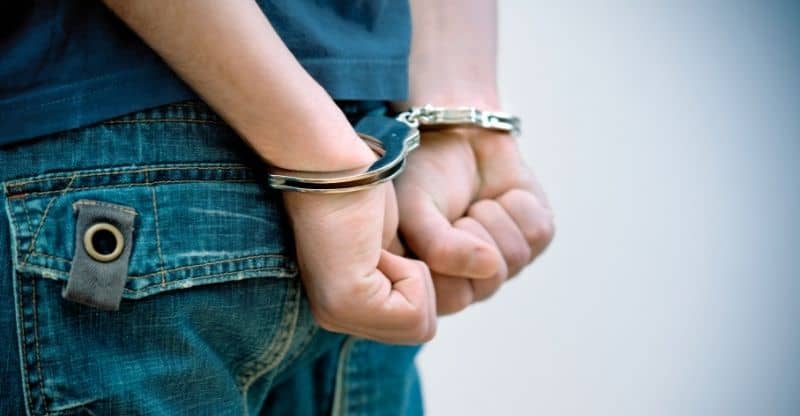 Since civilization began, there have been law-abiding citizens and people who don’t (who we call ‘criminals’).

While committing a crime is usually a bad life choice, there are some great songs about breaking the law as you’re about to see.

‘I Fought The Law’ – The Clash

If you needed one and only one song about breaking the law, this is it. The Bobby Fuller Four popularized the song, but this version by The Clash nailed it.

Here’s a guy who regrets taking on the law. He took them on ‘cos “I needed money, and I had none,” but now he’s in big trouble. He feels guilt for letting his woman down, too, “she’s the best girl I’ve ever had.”

It’s such a great song you could play it on repeat all day and still not tire of it.

‘I Shot The Sheriff’ – Bob Marley

Here, the narrator shoots Sheriff John Brown, but “I swear it was in self-defense.”

Marley is making a bid for freedom in the song and starts to leave town, but the mean Sheriff – who’d always had it in for him – starts “aiming to shoot me down.” “So I shot, I shot, I shot him down,” Marley sings.

Eric Clapton did a respectable version of this song, but Bob Marley’s original version hit a home run.

This song is a plea for peace because Police and Thieves are “scaring the nation with their guns and ammunition.”

Produced by the legendary reggae/dub producer Lee “Scratch” Perry, this would always be a great song with him at the controls of his ‘Black Ark’ (the name he called his studio in Jamaica.) The Clash also covered it.

‘Crime in the City’ – Neil Young

A lesser-known Neil Young song from his late ’80s Freedom album, ‘Crime in the City’ (or ‘Sixty to Zero’ as it’s sometimes called), is a superb example of a story within a song.

The version on the album was relatively short. However, in this brilliant live version, it goes on and on. I’ve no idea how he remembers it all!

Lyrically, Young has never been better than in this song.

‘Caught By The Fuzz’ – Supergrass

The Fuzz, in case you were wondering, is a slang term for The Police in the U.K. (they probably don’t like it very much, though).

The song’s lyrics are about when the frontman of the band Gaz Coombes was caught in possession of weed at the age of 15. He was pulled over for a faulty headlamp in his car, which led to him getting busted. Check your lights, people!

Here’s the narrator’s Dad was a bankrobber and did it ‘cos “he just loved to live that way.” He’s the lovable rogue who “hurt nobody.”

There’s a realism about inequality, “some is rich, some is poor, and that’s the way the world is.”

But a resistance to settle with his lot in life, “I don’t believe in laying back / Sayin’ how bad your luck is.”

In this contemplative tune, the narrator is lying in bed watching his love sleep, “her hair, in a fine mist, floats on my pillow.”

But this is his last bit of refuge before the morning comes. He knows “with the first light of dawn, I’ll be leaving” as he committed a crime (robbed a hard liquor store) and is on the run.

It’s easy to forget just how brilliant Simon & Garfunkel were. This is right up there with their best songs.

We’re never told what the crime was that led the protagonist to be on the verge of getting hung (the gallows pole), but unsurprisingly he’s rather desperate for someone to come to his aid to pay off the hangman.

Unfortunately, his friends don’t have the cash, “You know that we’re too damn poor, to keep you from the gallows pole.”

Finally, his sister shows up and offers herself up for the hangman. Rather cruelly, he hangs him anyway (“I laugh and pull so hard”). Note, some think he hangs the sister, not the protagonist. See what you think.

Here’s a classic jailbreak song from the mesmerizing Thin Lizzy. The protagonist and his boys have had enough on the inside and are “bustin’ out dead or alive.”

He suggests you make yourself scarce (“don’t you be around”) as there’s going to be trouble. Probably a good idea to stay home tonight then :p

Here’s a Dylanesque song about a guy trafficking drugs (“bringing in a couple of keys,” keys = kilos) as he travels from London to L.A. “over the pole.”

He asks the “customs man” not to check his bag. Yeah, not sure that will work!

It’s also a pretty bizarre flying song, with mention of “chickens flying everywhere around the plane.” No wonder the crowd at Woodstock festival (where he played it) loved it so much. It’s completely off the chain!

A Bonnie and Clyde story about a young couple (“Billy Joe and Bobbie Sue”) on the run after a robbery gone wrong in “old El Paso.” They’re pursued by detective Billy Mack who “makes his livin’ off of the people’s taxes.”

“They headed down south and they’re still running today.”

While Steve Miller Band’s ‘Take The Money & Run’ (see above) treats them as heroes, Georgie Fame is far less impressed, “they were the devil’s children,” he sings.

They meet their end when “a federal deputation laid a deadly ambush” and “half a dozen carbines opened up on them” (a “carbine” is a rifle.)

There’s no riding into the sun for this pair.

‘Shoplifters Of The World Unite’ – The Smiths

Famously known as Morrissey’s favorite Smiths song, ‘Shoplifters Of The World Unite’ is a play on the communist slogan “workers of the world, unite!.”

Quite whether Mozzer was encouraging actual theft or a more figurative “taking things and using them to your own advantage” (which there was a lot of in the ’80s) is anyone’s guess.

‘Tweeter and the Monkey Man’ – The Traveling Wilburys

The brilliant ‘Tweeter and Monkey Man’ is a ballad about two delinquents who run into trouble with the law.

They encounter an undercover cop who “never liked the Monkey Man,” who hunts them down. It doesn’t end well for him either, “the undercover cop was found face down in a field.”

Of course, this song gets a mention on our songs about monkeys playlist too!

This early Dylan song resembles the story in Led Zeppelin’s ‘Gallows Pole’ (see above). It’s a song about injustice, like many early period Dylan songs were.

Here, a man is sentenced to hanging for stealing a stallion. To free him, his daughter has to ‘pay the price’ with the judge. She carries out the grizzly task, but the cruel judge fails to free her father.

In the morning, “she saw that hangin’ branch a-bendin’, she saw her father’s body broken.”

Cash performed this song in prison, so the cheers you hear in the background are actual inmates!

Johnny Cash performed around twelve shows a year throughout his career, mostly in Folsom and San Quentin prisons – he did them for free. He was critical of the prison system, famously saying, “I don’t see anything good come out of prison.”

The narrator in the song “shot a man in Reno just to watch him die.”

The Hendrix classic ‘Hey Joe’ was written by a Greenwich village regular named Billy Roberts. It’s a song about infidelity and murder.

Joe catches his woman cheating on him (“I caught my old lady messin’ ’round town”) and shoots hers. The narrator (Jimi) then asks her, “Where you gonna run to now, where you gonna go?” So he heads down south to Mexico.

The song is a comical story of a heist at a gas station gone wrong. His passenger pulls out a pellet gun and tells the gas attendant, “this is a holdup, keep a pumping, and don’t run.”

They then go for a beer (as you do when you’re on the run!)

When they’re about “as drunk as we could be,” the deputy sheriff walks in, and off to jail, they go. “It cost me two good years,” he laments.

Better pay for your gas, next time :p

More songs about the breaking the law