18 Songs about Breaking Up That Will Help You Get Through 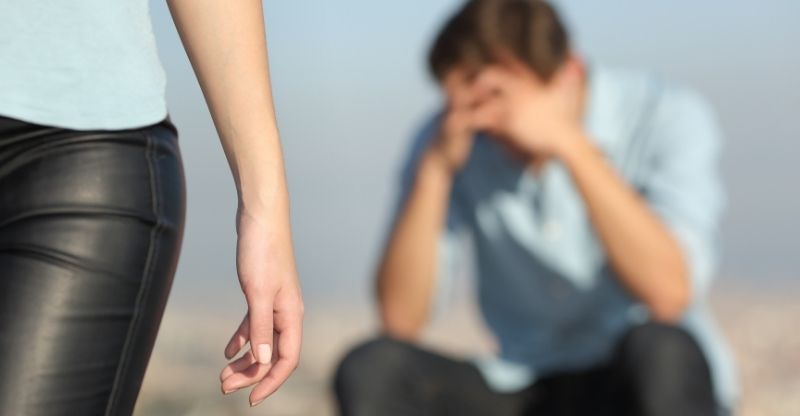 Breakups are hard to get through, whether you’re the one who initiated it or are on the receiving end.

If you’re suffering heartbreak or are angry at someone for breaking up with you, this list of songs about breaking up – written by some of the best songwriters that ever lived – might just help you process what’s happened.

Somebody That I Used To Know – Gotye feat. Kimbra

In this song, the narrator reveals that even though the woman had been happy in the relationship, he was unhappy and felt lonely with her (“but that was love and it’s an ache I still remember”).

Even though he’s happy to be out of the relationship once it ended, he’s upset over how the woman cut him out entirely and won’t even talk to him even more, even though she promised they could stay friends.

Tangled Up in Blue – Bob Dylan

From the infamous ‘Blood on the Tracks’ sessions in the mid-70s, this is a very personal song Bob Dylan wrote about relationships going wrong. It’s also one of the best examples of storytelling in a song.

Like a mini-novella, the timeline of the events is jumbled up. The story begins in the present after everything has fallen apart (“wondering if she’d changed at all, if her hair was still red”), reminisces about the past, and then returns to the present.

This acoustic version – released in the Bootleg Series – really is special and captures the essence of the song far better than the album version (in my opinion.)

What do you do when you run into an old lover you’re still in love with? You cry, and then you cry some more.

When the singer runs into his ex again, he’s reminded how much he loved them – the tears come thick and fast and his heart is broken all over again.

Related: check out our list of songs about exes.

In this song, the singer practically begs her lover not to leave. The maps that are mentioned in the song are a reference to new locations or the directions you can take in life.

“They don’t love you like I love you” is the singer telling her lover that the new people they’re going to meet will never compare to the love she was able to give them.

Related: see our list of love songs for him.

In this classic Coldplay song, the singer is trying to repair a relationship that is over. He apologizes and tries to convince his partner to take him back.

Unfortunately, its all a bit too late, there is no saving things. “I’m going back to the start” could either mean he’s going to keep trying to make it right or act like it never happened.

Related: this song features on our playlist of lost love songs.

I Know its Over – The Smiths

Here’s Morrissey at his melancholic best. Some interpret the singer to be at the end of his life – reflecting over the days he spent alone – but it can also be understood as a jealous man watching other couples be happy.

He pleads to a bride and groom to be happy and kind to each other, most likely because he can’t bear to see another relationship end as badly as his did.

Written by the late Danny Whitten, ‘Don’t Want To Talk About It’ has been covered numerous times (including a great Rod Stewart version). In this superb version by Everything But The Girl, the singer sings of her broken heart after a breakup. It hurts so bad, she can’t even talk about it. That’s how bad it feels.

‘Landslide’ can be interpreted a number of ways. Many see this song as a father-daughter relationship song, while others see it as about people growing up and out of their relationships. It works well as a breakup song since it questions the meaning of love and acknowledges how making your life revolve around someone can cause you to fear change. Some relationships can feel stifling.

Related: see our mixtape of songs about change.

Christmas doesn’t always put you in a jolly mood – sometimes, it makes you lament over your mistakes. Here, the brilliant songwriter Joni Mitchell sings of everything that went wrong in her relationship. She mentions all of her faults that drove her lover away and reminisces about the good times they shared together. While everyone celebrates the holidays around her, she just wants to ice skate away from her problems – don’t we all?

Related: check out our playlist of songs about rivers.

‘Someone Like You’ is an emotional song about getting over someone after a breakup. With the line “I heard that you’re settled down,” we can assume that either the ex moved on quickly – the thought that someone you care about has settled down with someone else is never an easy one to stomach.

She wishes her ex well but hopes to find someone just like them because she loved them so much. Perhaps it’s not the best way to move forward, but hey, it’s still moving forward.

People change, and love fades, and according to the brilliant lyricist Leonard Cohen, “it’s just the way it changes, like the shoreline and sea.”

Nothing Compares 2 U – Sinead O’Connor

In this brilliant song, no matter how hard the narrator tries to forget her ex, everything reminds her of him. This song was originally written and recorded by Prince, but it was this version that nailed it.

Here, Alanis Morissette is hopping mad. Her fella broke up with her out of the blue – she was ‘ceremoniously dumped’ – you could say.

She interrupts his dinner to grill him about his new woman and asks him whether or not he still thinks about her. With such a tirade of abuse, it’s enough to put him off his steak!

I Can’t Make You Love Me – Bonnie Raitt

In this song, the singer asks for one final night with her partner before they part ways. She’s still deeply in love with her him, but knows her man doesn’t feel the same. In a very grown up way, she accepts its over and accepts she has to let her unhappy lover go. As much as she wants to stay, she knows it’s wrong to keep them in a situation where they’re unhappy.

Related: go to our songs about not being good enough.

Bill Withers sings of a former lover he’s parted ways with – although, he hasn’t fully parted with her mentally. He’s hung up on the thought of what she’s doing without him and whether or not she’s found someone else. The idea hurts him, and he can’t find peace without her.

Related: see our list of songs about craving someone’s company.

In this song, the singer recognizes that his relationship isn’t what it used to be. He and his lover argue and don’t seem to make each other happy anymore. As much as he’s hesitant to leave the relationship behind, he would rather make his partner happier by leaving, rather thant forcing them to stay in a relationship that isn’t fulfilling. Sometimes letting go can be the best way to show someone you love them if it just isn’t working out.

Related: see our playlist of songs about letting go of someone you still love.

Dry Your Eyes – The Streets

This song is about the difficulty of letting go of someone who’s ready to leave when you’re not. The man desperately wants his partner to stay, but she’s already decided that she doesn’t want to be in the relationship anymore.

He tries to convince her to stay by hugging her to remind her of how good it was between them, but it isn’t enough. He has no choice but to let her go and try to find someone new and move on.

Tell Me How – Paramore

The relationship in this song has gone south and is about to end. Her partner won’t even pick up the phone. She’s frustrated and angry, but she still has feelings for him. “Tell me how to feel about you now” shows that she doesn’t know what they want anymore and that it would be easier if he would just tell her.