16 Best Songs about Breathing That Will Take Your Breath Away 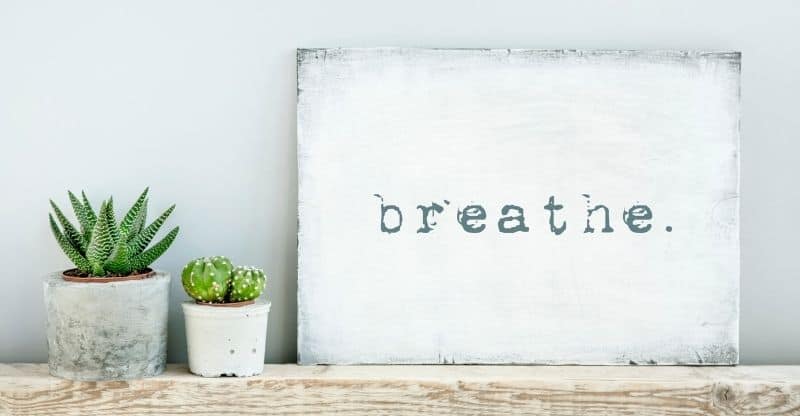 To live, we need to breathe. It’s something we all take for granted, but we don’t last long when we stop.

In contrast to eastern religious practices where breathing exercises are crucial (e.g., meditation, for example), we don’t give it much attention in western culture.

Songwriters are no fools, though, and have observed its importance. As you’re about to see, there’s a lot of songs about it.

So, here are the best songs about breathing (or songs with breath, breathe, or breathing in the title).

A song from Pink Floyd’s classic album, Dark Side of Moon. Not only did the album feature one of the most iconic album covers in history, but it also included a ton of amazing songs like this one.

‘Breathe’ sees an older man speaking wisdom to a young child. He urges the child to “breathe in the air” (meaning be yourself – everybody else is taken.)

Of course, it wouldn’t be a Pink Floyd song if it didn’t have a poke at the establishment. Here, the narrator warns ‘the machine’ is ready to send you to an early grave (listen to their ‘Welcome to the Machine’ from the album Wish You Were Here for more on this).

The song is really about how to live a good life, years before ‘self-help gurus’ were a thing.

Every Breath You Take – The Police

One of the most famous songs about breathing is one of the most misunderstood. It’s often considered a love song (popular at weddings and the like), when in fact, it’s a song about a creepy stalker. Time to revise the wedding song list then!

Fans of Puff Daddy’s ‘I’ll Be Missing You’ will recognize it, as it’s sampled on that track (we include it on our list of songs about losing someone.)

The song has a famous bridge too, called “one of the great bridges ever written” in a fascinating Rick Beato interview with Sting.

Take My Breath Away – Berlin

Let’s stay in the ’80s with this classic love song from the Tom Cruise hit movie Top Gun.

This synth ballad was played in a steamy scene between Cruise and Kelly Cruise and McGillis. It did so well; it even won an Oscar for Best Original Song in 1986.

Many of us suffer from anxiety, and despite being an award-winning pop star, so does Ariana Grande. This song is about her crippling anxiety attacks when she struggles even to breathe.

Her panic attacks were made worse after the horrific terrorist attacks at one of her gigs in Manchester, England when 22 of her fans were tragically killed.

There are plenty of references to “getting high,” which suggests this song by the British electronic duo is about drugs. Still, it’s more likely about an addictive relationship than a substance. She can’t help love this person, even though she knows she probably shouldn’t.

The song comes from Frou Frou’s only album, Details, a pretty cool mix of electronic music and trip-hop, pop, and rock.

Have you ever lost your breath? Well, you might just if you dance along to this one.

With a frantic marching band drumbeat along with a military call of “hit me!” at the beginning, this is a girl-power anthem that puts the guys in their place.

Here’s one of the best songs on the list, written by Pearl Jam’s Eddie Vedder. It touches on the important things in life: gratitude for the special people in your life, and ultimately, losing people.

Country music legend Willie Nelson covered it as a testament to how good the song is. We’ve included his version here as it’s so great – the video shows Nelson and his son Lukas (a musician) on a father-son road trip.

Here’s a song about the end of a relationship and saying goodbye.

The narrator is sad that it’s all over but accepts it has to happen. The song doesn’t point any blame, just an acceptance that it’s nobody’s fault, “I can’t breathe without you, but I have to.” A very grown-up attitude.

People go crazy about this song. With good reason, too. It’s superb in every way.

Kevin Parker (aka Tame Impala) makes a refreshingly alternative blend of psychedelic rock/pop music that you have to hear. This one (together with the trippy video) is about calming yourself down with deep breathing so you can “let those colors run.” It was inspired by a time Parker went shopping while he was stoned (never a good idea).

You can’t have a list of songs about breathing without this one by Kate Bush. It’s a very disturbing song, sung from the point of view of a fetus in the womb.

In the song, a nuclear war has happened in the outside world, and the baby has to breathe radioactive air into its lungs – what a depressing thought, having a baby should be a joyful thing. It’s a deep song and is really about us homo sapiens tendency to want to destroy each other.

The song also gets a mention in our list of family songs.

Air That I Breathe – The Hollies

Here’s a song about falling in love so deeply that you’re willing to forego most things – cigarettes, sleep, light, sound, books, even food (come on, food?!).

All he needs to live is the air he breathes and her love. Sweet, right. K.D. Lang also did a great cover of this in the ’90s.

Breathe You In – Dierks Bentley

Here’s a song by American country music star Dierks Bentley about a guy who’s wary of love but ends up so madly in love that he wants to “breathe her in” (sounds a bit weird, I know).

The song also includes the line, “I wanna be so close, you can wear my skin like a new set of clothes.” I’m sure Hannibal Lector would approve.

If we boil things down to the core, if you’re still breathing, you’re still alive. You haven’t had your last breath yet.

That’s the essence of this song that explores the theme of individuals (a drug addict, a gambler, a fatherless child, a single mother, a soldier returning from war) who find strength in the face of hardship and challenging times. His “head’s above the rain and roses.” It’s a great song about the resilience of the human spirit.

You Take My Breath Away – Queen

Queen’s Freddy Mercury wrote some of the best love songs of our time (his song about a long-lost love. ‘Love of My Life,’ is often held up as one of the best ever written.) This one isn’t far behind and appeared on Queen’s celebrated ’70s album, A Day at the Races.

Maroon 5’s first single gave us a taste of things to come. In the song, singer Adam Levine feels suffocated and unable to breathe. The lyrics are a reaction to the band’s record label putting pressure on them – ironically, it seemed to work, serving as the for this song.

You don’t often associate Nick Cave with joyful love songs, so this might catch you a little off guard. You can’t help but feel all this optimism is a little tongue in cheek, but let’s go with it. I need a happy love song….er, you need some Nick Cave then. Job done.