23 Best Songs about Brooklyn That Celebrate Its Edgy Culture 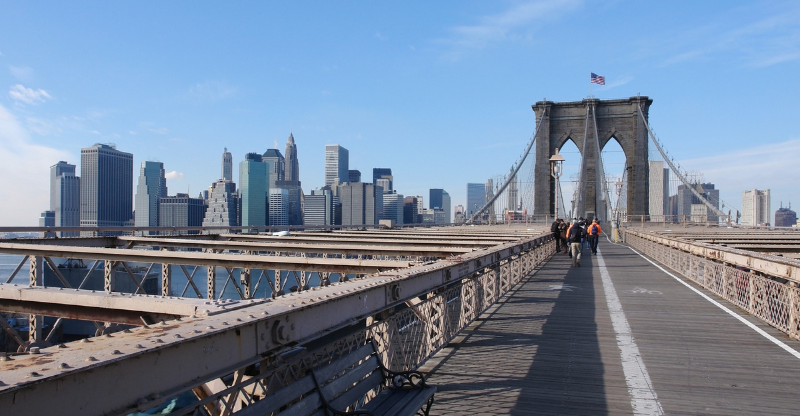 Brooklyn is one of the most well-known boroughs in New York City, celebrated for entertainment attractions like Coney Island, the community, and of course, the pizza. Even if you’ve never been to Brooklyn, the promise of the city is something we all dream of sometimes.

These songs about Brooklyn capture the good and bad aspects of the city from lifelong Brooklynites, new residents, and those who can’t wait to leave.

This funky hip-hop song celebrates Brooklyn and the unmatched swagger of the people that live there. A few different people take a verse on this track, each rapping about what living in Brooklyn is like and what it means to them. It’s a fun song showing off how “Brooklyn is the illest, the realest.”

Mos Def feels lonely on this track but finds solace in knowing that his city will always be there for him. He raps about the animals, people, and streets of Brooklyn, telling us just how amazing the city is. Even though it’s not perfect, he wouldn’t ever consider leaving, saying, “Brooklyn my habitat.” It’s truly the place where he belongs.

Related: Here are some more of the best songs for when you feel alone.

Biz Markie raps about his connection to Albee Square Mall, a mall in Brooklyn that closed down in 2008 after about 40 years of business. The heavy beat and impactful vocal delivery show how important this mall is to him, especially when he drops lines like “you wouldn’t think it’s a store, you would think it’s my home.”

Related: If you feel at home in a mall, you’ll love the best shopping songs.

‘Brooklyn Bound’ is a gritty and unapologetic song about running away to Brooklyn to escape an unhealthy life. Grungy electric guitar and filtered vocals show the complete lack of remorse present in the narrator—he can’t wait to get out. Even though he has no money, his awful partner gives him all the motivation he needs to escape to Brooklyn, and he tells them, “well, I’m leaving you, babe. Hope you burn in hell.”

Related: Make a run for it with our playlist of escaping music.

The relaxing guitar riffs and laid-back, almost conversational vocal style in this song makes it feel calm, but it covers some heavy topics. Much of the song deals with the pressure on men to be stereotypically masculine. Towards the end, Lou Reed finds the “glory of love,” and a ‘Coney Island Baby’ finally accepts himself.

This is a moody track with tons of echoing reverb, all about Lana Del Ray being an authentic ‘Brooklyn baby.’ She talks about the people that call her vintage aesthetic fake, saying, “they think I don’t understand the freedom land of the seventies.” She clears up the rumors while poking fun at the hipster aesthetic with lines like “I’ve got feathers in my hair, I get down to beat poetry, and my jazz collection’s rare.”

Related: This song features on our playlist of the best NYC songs.

Bruno Mars sings about an enigma of a woman in this pop track. It seems he met this girl at a train station, but before he could get her name or number, her train came along and swept her away. All he knows is that she’s wearing “red Nike high tops” and “listenin’ to hip-hop” somewhere out in Brooklyn. Hopefully, they found each other again!

Related: Searching for someone? Listen to these looking for love songs.

‘Brooklyn Roads’ is a beautifully nostalgic track everyone can relate to, even if you haven’t ever been to Brooklyn. Neil Diamond sings about his childhood and all of the memories that the Brooklyn roads carry. The memories of his family, friends, and younger self all live on those streets.

Related: Take a trip with these songs with road in the title.

Brooklyn’s in the House – Cutmaster D.C.

This electronic hip-hop song celebrates the vibrant community of Brooklyn. Its inhabitants are full of energy and heart and are certainly always ready to party. This borough seems to be the basis of that classic description of New York, “the city that never sleeps,” based on the line, “you can tell it’s Brooklyn by the way we rock: 24/7, around the clock.”

Coney Island is a huge summer destination in New York with its long boardwalk, amusement rides, and countless concessions and souvenirs. Death Cab for Cutie doesn’t seem to take this stance, singing about the joy they feel when Coney Island is closed—”everything was closed at Coney Island, and I could not help from smiling.” They know that Brooklyn, and life in general, is not permanent, which can sometimes make it hard to enjoy the present.

The Crooklyn Dodgers wrote this Brooklyn anthem as an ode to the city, rapping about a range of topics like nostalgia, racial tension, and stereotypes. The riveting and impactful lyrics are all set to a groovy beat emphasized by a ringing bell. The line “Brooklyn: the name alone holds Godly” tells us just how notorious Brooklyn is as an amazing city.

I and Love and You – The Avett Brothers

Though the “Brooklyn” in this song seems to be a woman, not the city, the song was actually inspired by a welcoming crowd at a show The Avett Brothers played in Brooklyn. The narrator has cut ties and is running away, asking, “Brooklyn, take me in. Are you aware the shape I’m in?” Using a word that is both a place and a name is a creative touch; he could either be asking a woman to take him in or a city to accept him.

Related: What are you avoiding today? Here are some songs about running away from problems.

Brooklyn Bridge to Chorus – The Strokes

The narrator of ‘Brooklyn Bridge to Chorus’ is having some kind of life crisis, looking back at his youth in the 80s and wishing he could make new friends. The alternative electronic song captures that helpless feeling of loneliness well, saying, “I want new friends, but they don’t want me.”

Related: Our playlist of music about friendship celebrates friendships of all kinds.

Al Stewart tells the (fictional) story of meeting a woman in Brooklyn and spending the night with her as they spoke about the stars and their lives. The song is a great narrative full of descriptors like “the violent day runs wild” and “she spoke of astrology while muttering apologies.” Each description always leads back to Stewart being with this woman in Brooklyn.

Related: Go stargazing with these songs about the night sky as background music.

Brooklyn can be a great area, but living in the city always comes with financial risks—it’s expensive! This acoustic song features lovely guitar plucking and raspy vocals as Justin Townes Earle sings about how he can only take one more night in Brooklyn. He wants to provide for his woman, but his lack of money means he can’t afford to get her anything. The pair is going to pack up and go west, but right now, they have “one more night in Brooklyn.”

Related: Can’t afford the things you’re after? See our playlist of songs about struggling.

Brooklyn (Owes the Charmer Under Me) – Steely Dan

Steely Dan sings about everything he believes Brooklyn owes the subject of this song. He may be talking about himself, his partner, or someone else entirely—there are many ways to interpret the track. The piano backing and emotional vocals almost make the song a ballad, but the high energy combats this a bit. Steely Dan gets creative with the city’s debts, naming things like “an evening with a movie queen” and “a piece of island cooling in the sea.”

Frank Sinatra is known for his honey vocals and smooth jazz style. The humble horns and gorgeous strings give ‘The Brooklyn Bridge’ such a peaceful feel as Sinatra personifies the bridge. The song was made for the 1947 film, It Happened in Brooklyn, and talks about how this bridge is such a landmark of Brooklyn it is instantly associated with the city.

The first line of this catchy hip-hop track immediately sees Lil’ Kim claiming her hometown: “I come from Bed-Stuy,” or Bedford-Stuyvesant, a neighborhood in Brooklyn where Lil’ Kim grew up. She sings about the community, claiming “Brooklyn home of the greatest rappers.” And she’s not wrong! Many big rappers, like The Notorious B.I.G., started out in Brooklyn.

This funky track features unique electronic elements, fun record scratching, and addictive rap melodies. The song talks about the community of Brooklyn, critiquing the queens of Brooklyn that want the narrator only for his money and fame. Based on this song, a Brooklyn Queen is a woman who is flirtatious, confident, and maybe not always in it for the right reasons.

Related: Check out these songs about selfishness and greed.

‘Bucktown’ is another name for Brooklyn, and the song has both pride for the city and criticism for how the law tends to treat the people that live there. The line “pigs look me up and down with a frown, is it because I’m brown, or is it because I’m from Bucktown?” references the stereotype that the people of Brooklyn are dangerous, which may be a prejudice intertwined with racism.

The quick drumbeat and slightly messy vocal melodies add to the chaotic feelings Andrew McMahon is experiencing. Even though Brooklyn is a special place to him, he feels overwhelmed by the city, saying, “Brooklyn, my dear, you’re killing me.” Sometimes when life feels like too much, that urge to get out of town takes over. McMahon captures that perfectly with this song.

Related: Feeling stressed? Here are some songs that describe anxiety.

The Place Where We Dwell – Gang Starr

No matter where you grow up, the community and environment around you certainly play a huge part in shaping who you are. Sometimes this can be a good thing, but sometimes it can be stifling. Lucking for Gang Starr, living in Brooklyn, has positively impacted him, teaching him not to cheat his way through life or settle for less than he deserves.

This song is short and sweet, coming in at just over a minute long. Despite its length, it’s packed with love for Brooklyn, the city that Art Garfunkel says “will always be home.” It’s nostalgic and simple, with crooning strings that provide a backdrop for Garfunkel to reminisce on the childhood memories that Brooklyn holds.