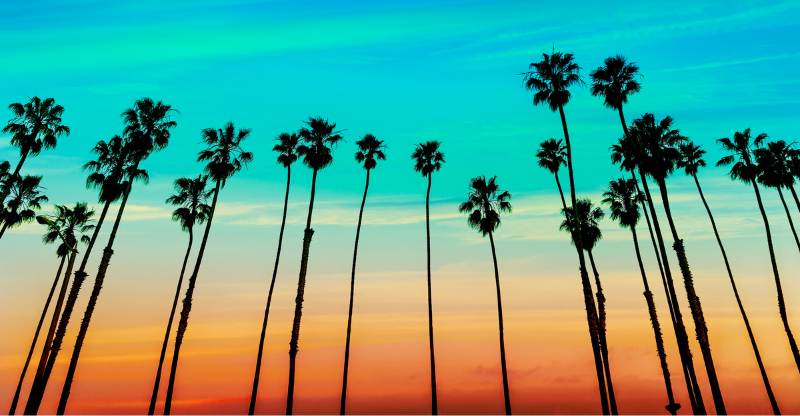 The Golden State is one of the United States’ most famous and loved states, with iconic cities (San Francisco, Los Angeles, San Jose, Santa Monica, San Diego), famous landmarks (The Golden Gate Bridge), and the stunning California coast (take a trip down the Pacific Coast Highway). It’s also the home of Hollywood.

It’s an influential state for music too and has been home to numerous musicians (see Jacob Dylan’s brilliant documentary about Laurel Canyon) and the birthplace for several musical ‘scenes’ including rock (e.g. The Eagles, The Byrds, The Doors, Grateful Dead, Red Hot Chilli Peppers) to hip hop and rap (e.g. The Pharcyde, Snoop Dogg).

So to celebrate this fabulous state, here are some of the most famous songs about California.

While California is in its title, this Eagles staple is really a criticism of cultural obsession with excess and materialism. It paints the American Dream in a dark light through an unusual musical story presented from an outsider’s viewpoint.

Related: This classic also appears on our road trip playlist.

John Mayer sings of getting over past troubles and looking to the future with enthusiasm in this track. It references the early 1970s and its bohemian Los Angeles vibes that influenced many musicians of the time, particularly LA rock artists (in particular, Neil Young with a nod to the guitar riff in his song ‘Ohio’.)

California Dreamin’ – The Mamas & the Papas

No list of California songs is complete without this classic inspired by Michelle Phillips’ homesickness for her home of California while dealing with a cold New York City winter. It’s about dreaming of and hoping for another place rather than the location you’re currently living in. It’s a unique piece for the pop genre in that it contains a flute solo.

Related: We also include this track on our songs about cold weather.

Robert Plant sings as a man who is leaving a hurtful woman and going to California to find a new life and—hopefully—a new lover. Joni Mitchell’s song ‘California’ was an inspiration for this track; the dream woman characterized in ‘Going to California”s lyrics was even based on Mitchell’s look and characteristics.

This song paints a lovely picture of laying beneath a star-filled California sky and having wonderful dreams. The lyrics were written by Woody Guthrie, who died 30 years before the song was released by Billy Bragg and Wilco. Guthrie never wrote any music to accompany the lyrics or recorded any part of the song.

The “Dani” of this track is a mixture of every woman that Red Hot Chili Peppers’ lead singer Anthony Kiedis encountered in his life. The same character appeared in two other songs by the band. The song appears in the Japanese film Death Note and won two Grammy Awards.

This is a simple song about love and California’s cool factor. Marlena Shaw’s cover of the Messengers Motown classic was released in 1969 and has appeared in various television commercials since then. Several hip-hop producers have also sampled the track for their own works. The track is a funk-soul piece that has been covered by numerous artists in addition to Shaw.

This song finds its protagonist yearning to get back to a lonely and quiet life. It was originally recorded for a Kings Of Leon EP but was redone for a later album. However, the band is said to prefer the first version over the remake.

This sunny beach piece celebrates the women of California in typical Beach Boys fashion. The song is interesting in that it uses a contrasting verse-chorus structure. Mike Love provided lead vocals, but the rest of the group lent their voices to the backing track.

Related: This also features on our playlist of songs with the word girl.

Here’s a simple piece about going to California to lead a fun and carefree life. The Rivieras were the second act to perform the track and became one-hit wonders as a result; they were a simple garage band from South Bend, Indiana, before then. The song was not popular during its original release by Joe Jones, but the Rivieras turned it into a cultural force that is still featured in pop culture and covered by artists to this day.

This ode to California and finding a new home there was first released by Neil Young on 12 August 1985. The Clampetts released a cover version of their own in 1987. Canada-born Young has lived in California since 1966 but was not granted U.S. citizenship until January 2020.

This is Phantom Planet’s tribute to the Golden State that also highlights the culture of California. It was used as the theme song for the U.S. television series The O.C. in 2003; the series was set in Orange County, California. It was also featured in a documentary titled Enron: The Smartest Guys in the Room.

Albert Hammond discusses the struggles of his life in this piece, which was written during a period of struggle in the singer-songwriter’s life. Hammond has said that it’s one of his best and most important songs since it tells of his life and is something that he wrote, sang, and produced; many of Hammond’s works were sung by other musicians.

Related: This is one of the classic rainy day songs.

R.E.M. seems to imagine and mourn a fictional California that has been destroyed in this piece. Some have suggested that this is instead a breakup song, or something more abstract. It could also be about facing the disappointment that comes with having something turn out to be less wonderful than you expected it to be.

Back To California – Carole King

Carole King begs to be taken back to California in this track so she can feel like she belongs somewhere again. It paints a picture of feeling out of place and weary from being away from home too long that many listeners can relate to.

Katy Perry pays homage to The Beach Boys and their hit ‘California Girls’ with this pop hit. She also hoped to demonstrate the way that summer changes one’s mood and personality through the track. Perry has also said that she wanted people to book tickets to California when they heard her song.

This song shows that it can be okay to run away and find adventure in any place as long as your loved one is by your side. It was Jo Dee Messina’s debut single and provided her with critical acclaim as well as success on the music charts.