Get Your Sugar Rush with These 26 Songs About Candy 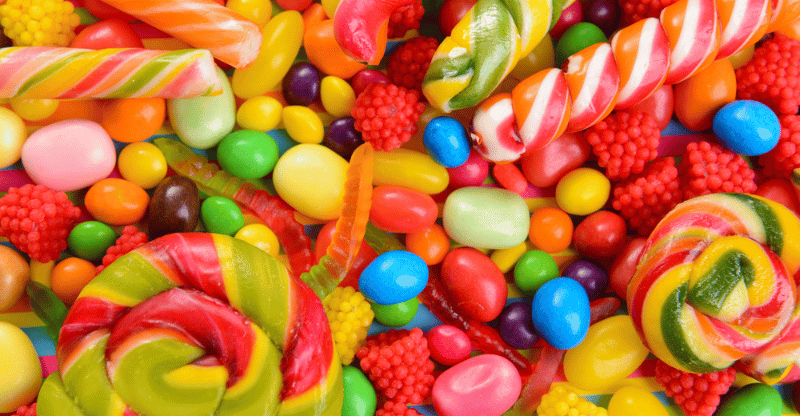 It’s hard to resist candy. Its sweet flavor, often attractive appearance, and reputation as being fun and sometimes “forbidden” make it a favorite for many food lovers. As you’ll see, many songs use candy and its sweetness to symbolize love and more.

Keep reading to learn about some of the most iconic songs about candy that can help you build a sweet new playlist.

Iggy Pop signs about a girl named Candy that left him and moved away in this track. It has been 20 years since she left, but he still can’t forget about her. Kate Pierson is featured on the track, both in her own verse as well as on the bridge and last chorus with Iggy Pop.

I Want Candy – Bow Wow Wow and Razed in Black

This song finds a female protagonist feeling great about her sweet lover. She wants this guy and isn’t ashamed to admit how strong her feelings for him are. It seems that they may not be a real couple, as she vows to make him hers eventually. The song was originally sung from a male perspective by The Strangeloves in 1965.

This track was designed to be as kid-friendly as possible—what better way than talking about sweet candy? The song also appeals to adults with its themes of wanting to be with a sweet lover. The protagonist can’t believe how great he has it in this relationship.

Sunshine, Lollipops & Rainbows’ was supposed to be released on Lesley Gore’s first album, but it was found that it didn’t fit the sadder themes of the other tracks. As a result, it was saved for her second album. The song finds Gore singing about how happy she feels whenever she is with the guy she adores.

This track’s style was inspired by The Jackson 5’s ‘ABC.’ In the lyrics, a narrator can’t stop thinking about a sweet girl. He isn’t sure if she really loves him, but she makes his world brighter every time he’s around her.

In this staple, a woman calls the man she loves “lollipop” because he is as sweet as can be. This track has become a mainstay in popular culture, making several film and commercial appearances since its release that keep it in the public awareness. It even made its way into a 2007 Dell laptop commercial.

Here, Christina Aguilera is head over heels for a sweet-talking love interest. She is happy to have passionate encounters with him because he is so charming. She highlights how dangerous a guy like this can be in the lyrics. While the song was generally well-received, some critics were offended by its strong innuendos.

Candy’ was the debut single from Mandy Moore’s first studio album. The song was a fairly successful hit that ended up being certified Gold in the United States. In the lyrics, Moore misses a guy who makes her feel weak and romantic. She hopes that he will come back to her because he is like a sugary candy that she craves.

The narrator here shares a sweet love with his romantic interest. The song hit Number Four on the US charts and was also successful around the world as one of the greatest candy-themed staples in music. Here’s an interesting fact about this piece: none of the studio musicians on the track were considered actual members of Ohio Express!

This is a lullaby of sorts where Elvis Presley tells listeners that they will travel to “cotton candy land” after the Sandman comes to put them to sleep. Presley goes on to tell a descriptive tale of what will happen in Cotton Candy Land and the magic that will occur there.

Here’s an R&B staple that has been sampled numerous times and was also featured in the Grand Theft Auto : San Andreas video game. The song finds Cameo craving a sweet experience, either with a lover or some kind of substance. He has trouble moving on in life without the candy-like feeling he craves.

Sammy Davis Jr. covered this track from Willy Wonka and the Chocolate Factory in 1972, a year after the film was released. The lyrics tell the simple story of a man who makes candy in a special way that demonstrates his love for his craft. While Davis Jr. didn’t like the sugary-sweetness of the song, it became his only Billboard Hot 100 hit in the United States—where it stayed at Number One for three weeks.

Sweets For My Sweet – Doc Pomus, Mort Shuman, and The Drifters

The Drifters first recorded this sweet classic in 1961, where it hit two US Billboard charts. The song was a rare Drifters release in that it didn’t contain a string section. The lyrics find a man wishing to give his love everything sweet that the world has to offer and basking in their time spent together.

Candy Rain’ samples ‘Baby, This Love I Have’ by Minnie Riperton. The lyrics use exaggerated candy metaphors to demonstrate how hard it is for the protagonist to describe the sweet, overwhelming, and unexpected love he has for the woman in his life.

The lead vocals of this song were actually sung by a non-member of Strawberry Alarm Clock. That non-member was then-16-year-old Greg Munford who was simply a guest in the studio the day the song was being recorded. The song was so popular after its release that it went Gold in the US at the end of the ear it was released in. The song seems to explore the dissatisfaction of youth in the 1960s with the state of society and injustice in the world.

This song is about Marshall Mintz, a friend of Cheap Trick who died. The song was tweaked to sound happier than its tragic backstory; they even changed Mintz’ name to “Candy” in the song to anonymize him and make the song almost seem like it was about a woman. Even so, the lyrics remain quite dark.

Neil Young wrote this somber piece about saying goodbye to one’s youth and holding on to happy childhood memories for dear life when he was nineteen; he released it several years later. Joni Mitchell was quite affected by the song—so much so that she wrote her song ‘Circle Game’ as a response to it.

Related: Check out more songs with mountains in the lyrics.

Here, Rihanna wants to meet a guy she can have passionate fun with. At the same time, she wants him to be the right guy so she can know she isn’t making a huge mistake. She wants him to prove his worth to her. She can’t get enough of him, but he has to prove that he feels the same for her to feel confident about their connection.

Dolly Parton shows listeners how bittersweet life can be in this song—especially at the holidays. She wonders what she will do to make this Christmastime special, but decides that it will be okay if all she does is hang out at a bar and let loose with friends. Life is hard, so it’s okay to let your hair down and have fun once in a while.

Robert Plant sang this track’s recorded vocals from a wheelchair after falling victim to a car crash in Greece. The lyrics find him asking a love interest to give him a chance to show how sweet of a lover he is. He can only think about her and wants more from her so he can feel fulfilled.

This was a b-side to Pink Floyd’s first single. The song originally had questionable references and was rewritten due to pressure from the record label. The band’s rebellious response was to write a song with both illusionary and explicit references to passionate connections. The narrator is clearly happy with his lover.

While this song may be critical of racial disparity in the United States, there could be other heavy and even controversial topics at play. On a universal level, listeners can relate to it as a song about making a hard choice that you aren’t sure if the right one and feeling conflicted.

The narrator here is remembering a past love, which seems to be the kind of nostalgic summer romance that many people remember from their younger years. He has kept his memories of the girl he loved then, but he hides them away because it is hard to face that this connection is over forever.

Here is one of many songs from the 1960s that talks about a female love interest in terms of being sweet like candy. The narrator has been searching for that type of love interest, and he has finally found her. Besides being sweet, she also thrills the narrator and the two have a connection that is easy for everyone to see.

Tom Waits tells listeners that he eats religious candy rather than going to church to keep his faith in God and Jesus here. Waits was inspired to write the song when his father-in-law was trying to get him interested in Testamints, which were lozenges with crosses on them that supposedly could help one worship God wherever they were.

Related: Go to more songs with chocolate in the lyrics.

This compares winter snow to a world made of marshmallows. The narrator encourages the listener to take advantage of the beauty of winter and go out and have fun in the snow, particularly with a love interest.