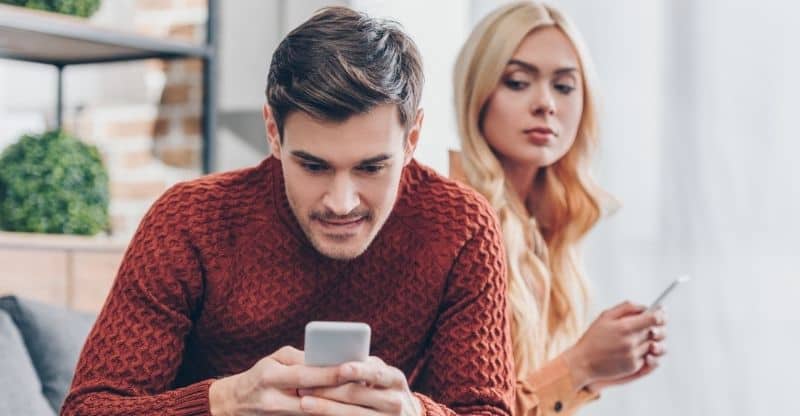 Has your other half ‘done the dirty’ on you? Or do you suspect they have?

Then here are some of the best songs about cheating ever written to remind you that you’re not alone.

As you’re about to see, some of the best songwriters have been lied to and deceived. Fortunately for us, they’ve written songs about it (there are so many cheating songs).

So here’s our pick of the cream of the crop. Some songs will comfort you, others will make you angry, and many will remind you that you’re better off without them in your life, anyway!

Her lover has cheated on Beyoncé. Rather than get mad, she sends him packing and tells him, “I could have another you in a minute.”

In other words, he’s not irreplaceable. She’s a class act!

‘Caught Out There’ – Kelis

While Beyoncé is the embodiment of calm (see above), Kelis is mad as hell. She screams in the chorus, “I hate you so much right now.”

It’s a display of utter contempt that many of us feel when somebody wrongs us.

‘Cry Me A River’ – Justin Timberlake

A song about Timberlake’s split with Britney Spears, who allegedly made off with her choreographer, Wade Robson. In the tune, the girl keeps calling him, but he refuses to answer. What’s done is done, and he’s on with his own life.

Related: Check out our playlist of songs about water.

If you’re intent on getting your own back, this is the song for you. Here, Blu Cantrell makes him pay (literally) by going crazy on his credit cards and selling all his gear.

I bet he regrets his infidelity now!

While we’re on the subject of getting your own back, we have to include this one. Here, Sullivan is so enraged with her cheating boyfriend that she takes to smash up his car windows.

It’s safe to say he won’t be taking ‘the other woman’ out for a drive later then!

Serious point: you could get yourself in serious trouble for damaging your ex’s car or anything of the sort. Your ex has hurt you enough, don’t make it worse—time to move on.

‘Break You Off’ – The Roots

A cautionary tale about an affair gone wrong, with dire consequences for the man. The moral of the story is that guys, don’t be led astray, or it could end up costing you big time.

Just how good is this song!

Based on a true story about lead singer T-Boz, who was unhappy with her man (who she knew was cheating on her). However, she still loves him and doesn’t want to leave, so she starts to fool around too, “cause I need some affection.”

It’s never too late to say sorry. Actually, for Taylor Swift, it is.

Here, her ex is asking for forgiveness, but she can’t bring herself to pardon his actions. You “shouldn’t be beggin’ for forgiveness at my feet,” she says.

He’s getting his comeuppance.

In this song, Sam Smith sings from the wife’s point of view, who’s a victim of an adulterous marriage. This married woman puts on a brave face but is really in pieces, resorting to “Jack Daniels for breakfast” and a “cap of valium mixed with antidepressants.”

It’s a desperately sad song, and the video hammers home her predicament.

This unrequited love song is about a woman who loves a guy, but the feeling isn’t mutual. But she’d sooner be deceived and hear lies (e.g., I love you) than know the truth and not have him.

Here’s a song about regretting hurting someone.

Here, Rihanna is cheating on her man. He knows she’s unfaithful but has stuck around (that’s probably the problem right there).

She knows the thought of her being with another guy “kills him inside,” but she can’t help herself.

This is one of the most famous songs ever about getting cheated on. Here, Morrisette is the scorned ex-girlfriend who’s been given the heave-ho.

She doesn’t go down lightly, though. Listen as she sends ‘Mr. Duplicity’ a tirade of abuse. It’s great fun.

‘Before He Cheats’ – Carrie Underwood

Carrie Underwood’s ‘Before He Cheats’ is one of the best revenge songs you’ll ever hear!

Like ‘Bust Your Windows’ above, Underwood takes a baseball bat (“a Louisville slugger”) to his “pretty little souped-up four-wheel drive” to teach him a lesson.

Here’s a song about women’s intuition from the guy who brought us ‘No Shirt, No Shoes, No Problem’ (one of the best beach songs).

The basic gist is when a man cheats, the woman will figure it out. “What she don’t know, won’t hurt her,” the guy tells himself. But that’s nonsense. She can feel her (the other woman) “all over her man.”

And guys, yes, that includes a one night stand!

Here’s a woman who suspects her man is with another woman when she’s talking to him on the phone.

Does he have a little secret he’s hiding?

Singer Adam Levine gets a ‘wake up call’ when he arrives home to find his girl with another guy. That is not the sort of wake up call you want.

In a somewhat rash move, he kills his girl’s lover and pays the consequences. What were you thinking, dude?

‘I Heard It Through The Grapevine’ – Marvin Gaye

So worse than getting cheated on? It’s finding out from word of mouth (“through the grapevine”) that you’re other half has been fooling around.

That’s the subject of this brilliant Marvin Gaye track.

In this song, Dolly Parton challenges a woman who’s taken a fancy to her man.

It’s supposedly based on a true story. The story goes that a flirty, red-headed bank clerk had got overly friendly with Parton’s newly married husband.

It’s also one of the best songs for karaoke ever!

Country song ‘Long Black Veil’ speaks about a man wrongly accused of murder but has no alibi as he was sleeping with his best friend’s wife.

His silence costs him his life. Then, finally, his lover comes to visit his grave dressed in a long black veil. This version here from Johnny Cash at Folsom Prison is superb.

A guy gets caught red-handed (or ‘with his pants down,’ you could say :p) but denies it even though he’s guilty as sin.

Eddie Murphy’s standup performance in the movie Raw inspired the song’s lyrics, where he advises that whatever you get accused of by your missus, just say “it wasn’t me.”

Country music is full of songs about cheating. Perhaps the most famous of the lot is ‘Your Cheatin’ Heart’ by Hank Williams.

His girl has wronged him, and he’s letting her know that someday she’ll pay the price for her infidelity.

As well as being one of the best car songs, ‘Maybellene’ is also about a two-timing girl who likes to fool around (“Maybellene, why can’t you be true”).

It seems she’s returned to bad habits, “You’ve started back doin’ the things you used to do.”

The story goes that an ex-girlfriend cheated on lead singer Brandon Flowers.

The feeling of jealousy overcomes him. He can’t stop himself thinking about them together, “but she’s touching his chest now, he takes off her dress now.”

Here, the narrator has been unfaithful. However, he laments the loss of the relationship with his partner and deeply regrets betraying her. The guilt is just too much (“I’m never gonna dance again.”) The message is ‘stay faithful.’

This is one of the best betrayal songs you’ll ever hear. The song is also notable for its superb sax solo, one of the most popular in modern music (and one which Michael is on record as saying was his most significant contribution to music, despite not liking the song much).

In this song about a cheating woman, she tells her husband she’s going to meet a friend when really she’s hooking up with another guy with “fiery eyes and dreams no one can steal.”

The song was inspired by times the band would play at Dan Tana’s, a bar in L.A. where women would come and have fun.

‘Between The Cheats’ – Amy Winehouse

In a clever play on words (between the “sheets/cheats”), we get a glimpse of the majestic Winehouse not long before her untimely death.

She thinks she’s on a winner (“I’m sitting on the royal flush”) and struck gold with this guy (“the jack of hearts is my jackpot”).

Here’s a slightly more upbeat take on the cheating song here. This is about a couple having an affair, but who both know it can’t last.

The chorus is a sample from the brilliant ‘Me and Mrs. Jones’ by Billy Paul. As a treat, I’ve included it below.

This song is about an extramarital affair between a man and a certain Mrs. Jones. Despite knowing it’s wrong, they meet at the same cafe every day at six-thirty. It’s “much too strong, to let it go now.”

But they both have responsibilities at home, so they know there’s no future. There’s even an air of tragedy to the whole thing. With that fantastic voice and the jazzy accompaniment, it’s superb!

More songs about cheating (if you needed more!)