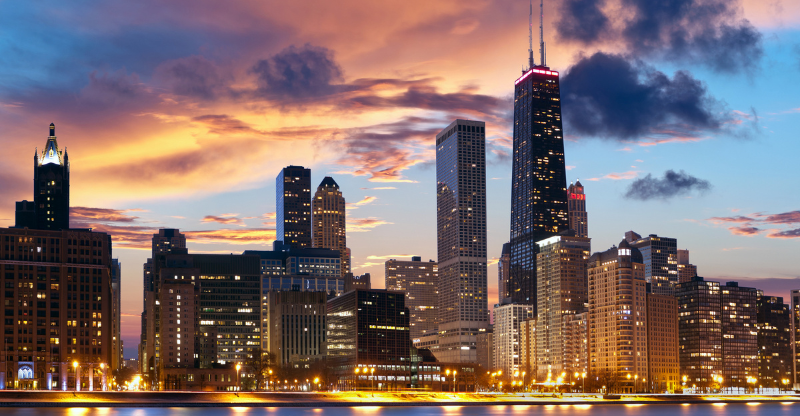 Chicago, Illinois, is one of the largest cities in the United States of America.

Many visitors and residents alike love the city for its unique charms. As it turns out, several musicians have had something to say about the Windy City.

Keep reading to learn about some of the most popular songs about Chicago.

My Kind of Town – Frank Sinatra

Frank Sinatra sings of the wonders of Chicago in this piece. It was written specifically for the musical Robin and the 7 Hoods in 1964. Sinatra recorded several versions; the lyrics make different references to the Windy City depending on which recording you listen to.

This song tells the story of Leroy Brown, a dangerous man who fights with other men and wins ladies’ hearts on the rough side of Chicago. The Leroy Brown character is based on a real man that Jim Croce met, though the story is embellished according to Croce’s wife, Ingrid Croce.

Related: Be careful with these songs about danger.

Here’s a song whose narrator is unsure about the choice he is making that will change the course of his life. He is following his love to Chicago, but only for her sake. He isn’t sure if he will like living there as much as she does.

While this song can be hard to interpret, Ryan Adams seems to refer to a past love as “Chicago” and a new love as “New York City.” He compares the two and seems to have trouble letting go of either one, where Chicago is a recent love and NYC is an older, dear love. He seems to finally be letting go and moving on with his life by the end of the track.

Related: Check out the best songs about moving on.

“Pulaski” refers to Pulaski Road on Chicago’s West Side. Andrew Bird seems to lament the negative changes he sees in his hometown. Bird seems torn between his nostalgia regarding Chicago’s past and his criticisms of its current flaws. He also struggles to describe the city’s charms to those who haven’t been there.

This song was written very quickly—backstage before a show, in fact. It seems to be about the day-in, day-out boredom that comes with touring after years and the feelings of being washed up that come with the whole experience. The narrator seems to be touring in Chicago during the time of the song.

The protagonist here tries to remain optimistic as he begins a new life, possibly with a new love. He regrets the choices he made in the past, particularly romantic ones. He also points out that “all things go,” highlighting the inevitable changes and losses we all experience throughout our lives.

Related: Starting over? Here are the best new beginnings songs.

This song is about Kanye West’s hometown of Chicago. The Chris Martin feature is thanks to a chance meeting between West and Martin in the studio they were recording in. It’s one of several collaborations between Martin and Hip-Hop artists.

Since this track refers to Chicago and California one line apart, it highlights Robert Johnson’s vagabond nature. Johnson seems unable to change his ways and has accepted that he is a traveler for life. The sound of the track and some of the lyrics are based on earlier blues classics.

Related: Hit the road with the best travel music.

This piece is full of religious symbolism; it may refer to Christian or gospel music making its way across the United States. In that sense, “Jesus” would be making his way through different parts of the country. Radio stations often play this track with ‘Waitin’ for the Bus,’ which comes before it on the Tres Hombres album by ZZ Top.

The narrator here is dealing with a fast-moving, exciting life. He is ready to use that adventure to his advantage to escape his troubles and start fresh. He will go to Chicago and try to make happy memories that will last for a long time.

Related: Get inspired to go somewhere with these songs about travel and adventure.

Take Me Back to Chicago – Chicago

This song finds its protagonist longing for the days when he hadn’t left his home of Chicago—when his life was much simpler. The track also became the title of a Chicago compilation album. It told the tale of Fred Page and his death but seemed parallel to Terry Kath’s death, which occurred shortly before the song’s release. It shows listeners that it is okay to slow down and enjoy the current moment rather than wishing years away due to impatience.

Related: Here are some inspirational songs about living life.

A man with a vicious mind sings to his lover about his dark daydreams in this track. Jeff Tweedy wrote the disturbing lyrics using a free word association approach, which helped him create something honest and emotional, if brutal.

Jon Fratelli wrote this song for his wife about her burlesque dancing career. It became the Chicago Blackhawks’ theme song in 2010, the year they won the Stanley Cup. It’s the band’s most famous track, but Fratelli doesn’t like it any more than the rest of The Fratellis’ songs.

While this is the theme for the Chicago Bulls, it has become popular at a wide variety of sporting events. It is a brief instrumental that opens the Eye In The Sky album. The Bulls created its popularity when they began using it as an intro for Michael Jordan at games.

Meet Me in Chicago – Buddy Guy

Buddy Guy wants to meet a “sweet home Chicago girl” in the Windy City and explore all it has to offer with her in this 2013 blues track. He’s been everywhere but craves the simplicity of walking around his favorite city’s downtown with the girl he loves as they make memories together.

This song has somewhat abstract lyrics. However, lead singer Billy Corgan has said that the track tells the true story of how he got out of Chicago—his hometown—and pursued his dreams. As the song says, “believe that life can change, that you’re not stuck in vain.”

Related: Head over to our list of the best songs about life changes.

The Sidewalks of Chicago – Merle Haggard

The protagonist here is only surviving, but it is evident that life and broken dreams have worn him down. He wishes he had been born in a different era, seemingly because he might have had better chances of having a good life in a different time. He even lives in a homeless shelter, highlighting the gravity of his situation.

Related: Need some encouragement? Here are the best survival songs.