These 15 Songs about Chickens Will Have You Clucking 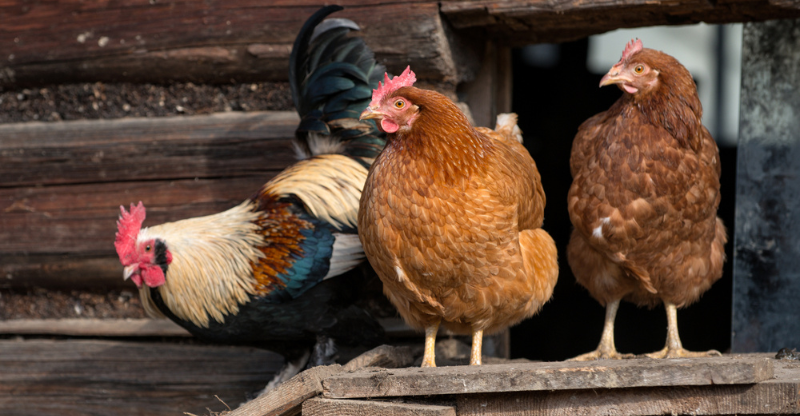 Chickens are quirky and loveable whether they’re roaming a farm or a backyard. Some people may find their behavior annoying, while others will find the same qualities charming and humorous. And let’s not beat around the bush—for meat eaters, they’re delicious!

No matter how you feel about hens and roosters, the following songs about chickens are sure to be of interest.

This song is a parody of Johnny Cash himself. In the lyrics, Cash undergoes a personality change after a brain transplant that may remind listeners of the Frankenstein story. It is also possible that the song is a criticism of Cash’s record label Columbia Records, and the lack of freedom he experienced due to his fame.

Do the Funky Chicken – Rufus Thomas

In this piece, Rufus Thomas teaches listeners a funky new dance called the Funky Chicken. Here are just a few of the ridiculous dance moves Thomas asks dancers to partake in: “You knees start wiggling all over the place. You flap your arms, and your feet start kicking.” The song was released on an album of the same name in 1970.

Ain’t Nobody Here But Us Chickens – Louis Jordan

The slang phrase that makes up this song’s title was widely popularized in this very piece. The song asks others to calm down because nothing extraordinary is going on. The song also seems to call out a boss and may reference past racial relations in several metaphorical ways.

Zac Brown began writing this piece several years before its 2008 release while living with a friend. In the lyrics, Brown encourages listeners to enjoy life’s simple pleasures, including Southern specialties like fried chicken and American freedom. The song also shows listeners that money doesn’t buy happiness.

Related: This song features on our playlist of songs about a food.

This song continues the album Dixie Chicken’s themes of heartache and infidelity in relationships. The track’s protagonist falls in love with a woman known to be the town’s heartbreaker. He realizes she has lived up to her reputation when she leaves him for other men after he has fallen head over heels for her.

Related: Check out our list of the greatest southern rock songs.

Here’s an odd song that talks about chickens as metaphors for different stages of the narrator’s life, from adopting two pet chicks to eating chicken with a lover and getting married. The couple has two “chicks” of their own near the end of the piece. One thing is for sure; the narrator knows all about chickens. Whether or not this is a metaphorical statement isn’t completely clear.

While this song seems abstract and humorous, it may have a deeper meaning if the lyrics are looked at more closely. It seems to be telling listeners about how humans have harmed various animals. The narrator then asks everyone to pay the creatures back for their poor treatment.

This song started as a joke when Mike Girard of The Fools started clucking like a chicken over a Talking Heads song. It soon became a humorous and dark piece about an out-of-control chicken seeking revenge on people like Frank Purdue and Colonel Sanders. The song fast became a hit after its release.

Related: Set the record straight with these songs about revenge and justice.

This song looks at the gritty aftermath of the Vietnam War. It mentions the brutal conditions at re-education camps and food scarcity in those days. The “chicken farm” of the title and lyrics refers to a specific Vietnamese re-education camp to teach those who were considered anti-government about the government of Vietnam.

Related: Listen to our playlist of war protest songs.

The Song of the One Legged Chicken – Tom T. Hall

In this country piece, Tom T. Hall sings about a one-legged chicken who lives in his barn. The first line finds Hall telling listeners that this is a true story. The song starts and ends with a chorus; there is only one long verse about the chicken’s birth and life in between.

Related: Sing about more critters with these songs about animals for adults.

This song has simple, repetitive lyrics about a mother chicken. Despite its odd nature and simplicity, the song became very popular; it was released on 22 October 2014 and had achieved more than 11 million views on YouTube by 13 December of the same year. The song was inspired by a dream that Rollin wang had about animals.

Here’s a song that seems to be about a dream that includes laser beams, among other bizarre concepts. One of these concepts is a train that runs all day and seems to take chickens away with it. The song was released on an album called The Lost Cabin Sessions by Ozark Mountain Daredevils.

Related: Our next stop is the best songs that mention trains. You won’t lose any chickens!

J-hope, a member of the group BTS, collaborated with Becky G to create this track, which interpolates the 2006 Webster and Young B song of the same name. Both artists said the song was a childhood favorite; this release appears to pay homage to it with multilingual lyrics about eating soup.

This song finds its narrator comparing a sweet love interest to the things he loves in the Southern United States. He loves hugging and kissing her and can’t get enough of her love or their relationship, which is also how he feels about eating chicken and biscuits.