11 Best Songs about Chocolate That Will Melt in Your Mouth 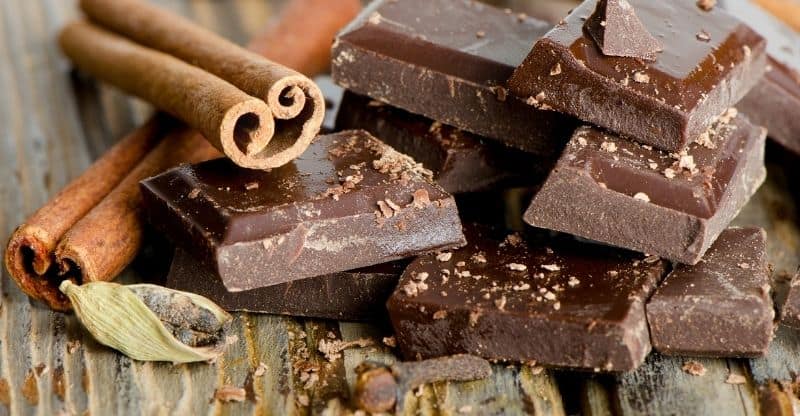 Author Wayne Gerard Trotman said, “As long as there is chocolate, there will be happiness.”

That might have been a slight oversimplification, but he has a point.

You meet the occasional person who doesn’t like chocolate (or can’t for medical reasons), but for the vast majority of us, chocolate is one of life’s little pleasures.

There’s Roald Dahl’s classic Willy Wonka and the Chocolate Factory tale. The fantastic movie Chocolat with Juliette Binoche and Johnny Depp. And let’s not forget the 70’s soul band Hot Chocolate – ok, perhaps not so much.

As we’ll see, chocolate has cropped up in a surprisingly large number of songs. Ok, ready to start salivating? Let’s crack on, then.

Song lyrics can come from the most unusual of places. Inspired by Eric Clapton’s love of choc (allegedly), George Harrison got the words for this sweet tooth romp from the inside lid of a box of chocolates.

If you’re old enough to remember, the chocs were Mackintosh’s ‘Good News’.

Here’s a song by punk rock band outfit, The Undertones. It looks like a shameful bit of brand advocacy, but back then, that sort of thing didn’t exist. I’m sure they didn’t receive a bean, not even a cocoa bean :-0.

Unsurprisingly, it’s about the narrator’s fixation with chocolate bars.

Here’s a little dig at modern consumerism. The song reminds us that the mass public isn’t interested in genuine art but prefers crowd-pleasing, sentimental stuff like Andrew Lloyd Webber musicals (e.g., Cats, or Joseph and his Technicolor Whatever Coat) and “cheap Picasso fakes” that look like art but are cheap imitations.

They make a good point. Unfortunately, the taste of the modern consumer is so dire.

In this song, Kylie uses chocolate as a metaphor to describe her obsession with love. But too much (chocolate or love) gets sickly. “If love were liquid it would drown me,” she sings.

Here’s one for the generation X’ers out there. It’s shot entirely using Facetime during a period of COVID self-isolation. It goes to show you what can be done in the confines of a tiny room with a mobile phone and a bit of imagination.

Here’s a satire on Christianity in the US and a commentary on how America has commoditized religion and disconnected it from its origins.

Here’s a portrayal of a Don Juan character who thinks every girl he touches melts like chocolate.

This top tune is from British indie-rock band The 1975’s self-titled album. The song is about drugs – ‘chocolate’ is another name for cannabis resin.

A Chocolate Sundae on a Saturday Night – Doris Day

A chocolate sundae, if you didn’t already know, is a bowl of ice cream with chocolate sauce. It was dreamt up by Charles Sonn”ag (“so”ntag” means Sunday in German and was translated to Sunday and later spelle” as “s”ndae”).