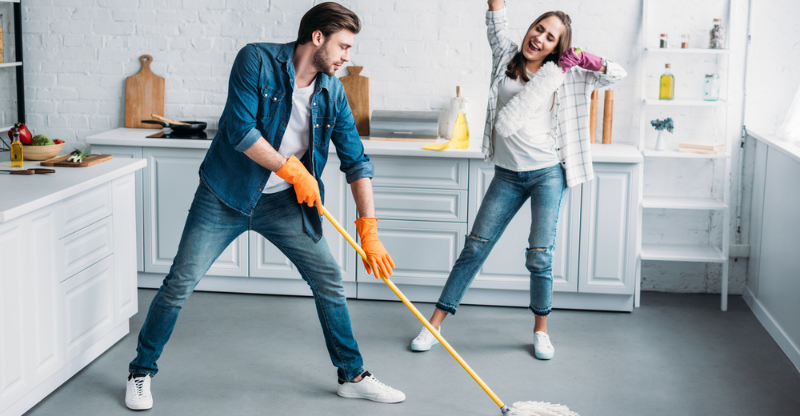 Some people love cleaning; some hate it, but everyone has to clean up at some point.

Of course, many of these songs talk of cleaning in the metaphorical sense e.g. ‘cleaning out’. So here are some of the most popular and well-known songs about cleaning.

This is a lighthearted track about making plans now rather than later. Jack Johnson was inspired to include the “washing dishes” analogy from his daily life as a family man doing chores around the house.

On its surface, this is a song about a kid being scolded by his parents for not doing his chores. However, it also is a criticism of the ways that marginalized groups were segregated from society in the late 1950s when the song was written. It stayed on the R&B charts in the United States in the Number One spot for seven weeks.

Eminem criticized his mother’s neglectful and hurtful behavior with this track. It was originally going to be used in the rapper’s film 8 Mile, but he wrote the track ‘Lose Yourself’ for that movie instead, as he believed that ‘Cleanin’ Out My Closet’ was too personal. However, this track was used for the movie’s trailer.

Related: This track also appears on our playlist of songs about being sorry.

Van Morrison worked as a window cleaner before he found success in the music industry. He reflects on the early 60s and his happy memories from when he cleaned windows in this track. The song did not chart, as it was not released as a single.

Motown writer Norman Whitfield was inspired to write this song for the Car Wash film soundtrack while eating a Kentucky Fried Chicken meal in front of the television. The song’s opening handclaps have been sampled numerous times since the song’s release. This chart-topper has been featured in pop culture and covered by famous artists since its film feature.

So Fresh, So Clean – OutKast

This song seems to be about a guy who feels confident from the attention a woman is showing him. It makes several pop culture references and samples two other songs: Funkadelic’s ‘I’ll Stay’ and Joe Simon’s ‘Before the Night Is Over.’ The track was certified Platinum in the United States in October 2020.

TLC decries good-for-nothing guys known as “scrubs” in this hit. This track became a cultural force that is one of the defining pieces of pop culture in the late 1990s. It also brought the term “scrub” into the mainstream. It won two Grammy Awards after its release.

Related: This also appears on our list of songs about self worth.

“Dirty laundry” refers to keeping a dark secret in this song, which discusses Kelly Rowland’s tense relationship with and resentment toward fellow Destiny’s Child bandmate Beyoncé, who found significant solo success after leaving the group. It also references an abusive relationship between Rowland and a boyfriend.

The Clean up Song – The Kiboomers

This simple children’s song makes cleaning fun and encourages young kids to do their chores. It’s popular at home and in classrooms and is by The Kiboomers, an award-winning provider of fun and catchy songs for the preschool set.