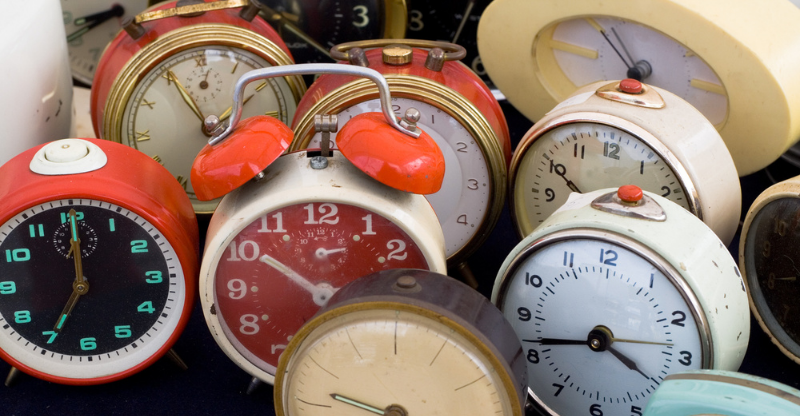 Clocks aren’t always our friends. They wake us up too early and remind us that we don’t have any time to waste! Rather than getting lost in thought about how much time you have left to accomplish everything in life, sit back and relax to this playlist of songs about clocks.

‘Clocks’ is about love and time, two things that can be difficult to deal with. “Closing walls and ticking clocks” mean the singer and his love interest are running out of time to decide their future. This song made it to the Top 10 in the UK. It only charted at 29 in the US, but the song is instantly recognizable to many since it’s been used in TV shows and commercials.

James Bay sings of the tradition of moving the clocks back one hour in the winter months, making the days darker. But, his lover provides enough light in his life that he can get through the cold days because “we’ll be slow-hearted lovers ’til the clocks go forward again.” He doesn’t have any reason to fear the darkness or feel lonely as long as he’s with his partner.

Sometimes humanity can’t help but question if we’re really alive or if we’re all just dreaming, or maybe we’re in a simulation. This song is about those deep thoughts and asks, “What if I’m already dead? How would I know?” Noel Gallagher wrote this for his brother Liam to sing in the band Oasis in 2001, but this song wasn’t released until Noel’s debut solo album in 2011.

“I was never a good puncher of time clocks” can mean that the singer sees himself as not living his life “on schedule” like society says he should. Joe Bonamassa sings of his downfalls, such as how he never had a lot of money, isn’t tedious, and can’t tell a story, suggesting that he doesn’t feel like he’s enough, and maybe that he’s “fallen behind” everyone else in life.

Rock Around The Clock – Bill Haley

‘Rock Around The Clock’ is a historical song. While it’s not considered the first rock song, it’s the first one that made it to the charts. It came in at number 1 in the UK and the US and ignited the rock era. The song is fast-paced and fun to dance to and sings about rocking all day and night.

The singer seems to have a regret or something he wants to redo since he wants to “wash away those lies.” He also wishes he could disappear and knows that he’s bound to make the same mistakes again. Donots is a German rock band and ‘Stop The Clocks’ charted at number 50 on the German charts.

‘Clocks Forward’ is an instrumental song that will make you want to chill out and vibe to the music. It’s classified as a lo-fi hip-hop song. Lo-fi music (which is more commonly spelled as “lofi” these days) is noted for its DIY sound that includes imperfections that aren’t typically allowed in most music. Psalm Trees has been making this kind of music since he was a young teen but didn’t start releasing music until he was a bit older.

Sometimes you may feel like you’re drifting through each day, wasting each day as you wait to stop drifting but are afraid to take a step forward. This song captures this anxiety-inducing feeling. The singer connects with the listener by repeating “that makes two of us,” letting anyone who may feel this way that they’re not alone in wishing they could stop time while they “waste” it.

The broken clocks in this song symbolize an erratic schedule due to overworking. SZA mentions working all day because she “got a shift at 10 AM, gotta dip at 10 PM,” and she hasn’t taken a break in a couple of days. This song is based on her life before she got into music because she had worked multiple jobs and sometimes multiple jobs simultaneously. ‘Broken Clocks’ charted at number 82 in the US.

Clocks And Timepieces – Search The City

In this song, the singer is singing to who appears to be his ex who left him for someone else, according to the line, “I’ve heard all about the others.” The singer regrets things he did, but his ex is also at fault. Even so, he wants to take the time to explain his side, apologize, and attempt to get back to the way things were.

Running The Clocks – Our Last Night

This song uses great personification to say you can’t control time by saying, “their hands are out of mine,” and “the future was on their minds.” The singer expresses that he wants to turn back time or at least slow it down so he can make the most of every moment or take back mistakes.

‘Moving Clocks Run Slow’ is open to interpretation, but it seems to be talking about two people interested in each other, but they’re each living their own lives and can’t seem to get the timing right between them. Each person could be considered a “moving clock,” and their inability to make it work out could be “running slow.”

Clocks and Calendars – Show Me the Skyline

The guy in this song is eagerly waiting for his girl to come back to town so they can spend time together. They could be in a long-distance relationship, or maybe it’s just something casual, but either way, he’s “marked that date” just waiting to see her again. Show Me The Skyline only produced two LPs in 2009, but lead singer Larzz Principato has moved on to be a songwriter and has written songs for Halsey and Dua Lipa.

Calendars and Clocks – The Coral

The Coral appears to be contemplating the meaning of life and time in this song. They say there’s “nothing more than the rich and penniless poor” or seashells or church bells that don’t ring. They also say, “I’ll break down and cry” if they’re asked who they are and that “we are only lines on a map.” It’s clear that the singer is overwhelmed by the passage of time and isn’t sure what he’s supposed to do with it!

The two clocks mentioned in the title are symbolic of the rhythmic beating of hearts. With this in mind, “time is falling behind” makes it seem like the relationship isn’t working out, or the two lovers are going through a rough patch. The singer tells his lover, “I want you for myself,” showing that he’s dedicated to this relationship and wants to make it work.

‘Clocks and Spoons’ is the “work song” for office workers. Imagine an office floor full of cubicles. The first verse paints this scene with the “clocks and spoons and empty rooms.” The second verse imagines what it would be like to live freely outside the office walls enjoying nature and not having any worries. But, the singer is stuck in the office, and “it’s raining out tonight.”